Continuing from my previous post (A Trip to Lombok – A 50 Hour Ride), it’s time to share the fist night and day on my hiking/trekking on Mount Rinjani, Lombok.

Mount Rinjani, at the beginning of our walk was a vast savannah. It didn’t look like a steep journey however even though it looked plain but it was actually slightly ascending. The view was wonderful, all around green.

The view we left behind

The view we were heading to

A short stair to climb

Me before climbing the stair

The view after that short stair 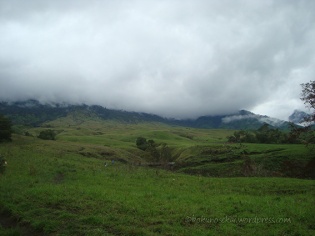 The fog already covered the mountain

I didn’t take any photo afterward because it was getting dark and I was only thinking of getting to the camping ground as soon as possible. On my way, I met the girl (her name is Rahma) I shared a bed with when we were on the ship (see previous post). The three of us (she was with her boyfriend) walked all the way together. Her boyfriend was very considerate, slowing his pace following us girls. We walked in the dark but it wasn’t something for us as most hikers here often hike during night time.

When we finally reached the camping ground (Pos 2), a lot of tents were already set. My boy who carried my group’s tent hadn’t arrived yet. I waited for them to come. They came half an hour later.

Nothing much to say about spending the night at Pos 2. Basically we set the tent, cooked and ate and then slept because we still had  a long walk the next day.

I woke up before the sun rose because I wanted to see sunrise.

Here’s the camping ground. I like seeing those colourful tents with the mountain as the background.

My group cheated a little, we set our tent on the shelter 😉 …so we had a flat area to sleep on.

Around 8 am, we began our walk again…this time, the walk was way more difficult compared to the previous day.

It was a relax walk, at the beginning. Thing changed when we encountered the Tujuh Bukit Penyesalan (the seven hills of regret)…they said it is called like that because there were seven steep hills. I didn’t bother counting. I walked together with Rahma and Galih (her boyfriend) again.

You can’t really see it from this photo below, the rocks line on the left side was the first steep trek we had to pass through. 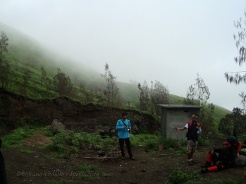 Some people had a rest before heading to that steep hill

The fog had descended

From this area, we had to climb all the way to our next camping ground. The place is called Plawangan. There were some very slippery areas, I needed help on those areas because my shoes couldn’t grip well on the soil. I like rooted trek way better those slippery treks. 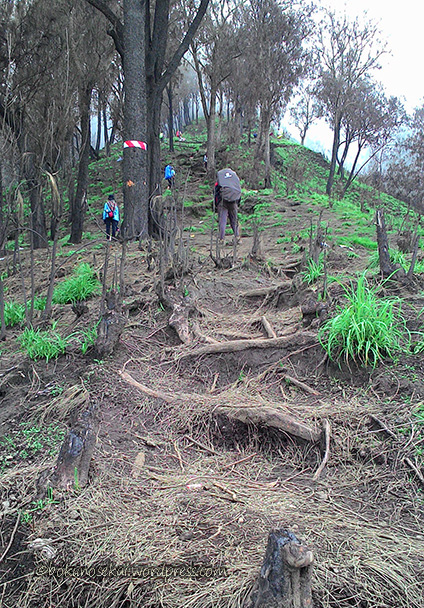 The fog had become so thick which caused limited sight.

Fortunately I had time to take pictures of the surrounding before the fog became thicker.

…before all the hills had been passed, the rain fell down. First it was just drizzle but then it became very heavy. When we reached Plawangan, the area was plain and the wind was much harder than when we were still climbing the hills.

We were wet and cold. the only dry part was my upper body. My arm and feet were all wet. We didn’t use jacket only rain coat. Though we were wet and cold and very thirsty but we had no water anymore. We used our coat to catch the rain water and filled our bottles. The water was refreshing. Fortunately, someone gave us water after he saw us filling our bottles with rain water.

We couldn’t find the camping ground of our trip-group. We walked on no matter how cold it was. At one point, Galih, seeing the two girls with him, decided to borrow a tent from another person from our trip-group. He said he needed the tent for the girls (Rahma and me) to at least change our clothes with the dry ones and wait for the rain to stop. That person agreed…thank God! He was a nice person.

We changed and ate. Changing clothes and eating cold food never felt as great as that time.

I forgot to mention that Mount Rinjani has the most foreign tourists compared to other mountains I had visited. I met some nice tourists on my way. However, I hated them a little because they didn’t feel cold at all 😉 We felt so cold and felt so nice to put our jacket on while some westerners (we called them Bule) passed through our tent wearing only thin t-shirt, and one man even wore nothing but short!!

Adaptation is an amazing thing, I live in tropical country and therefore a temperature lower than 16 degrees Celsius is very cold (and the mountain is way below 16 degrees)and I have to put my jacket on while for people living in four season country, 16 degrees is warm 😉

We moved to our camping ground when the rain had stopped.

We had to sleep early because we were going to start our hike to the top of Mount Rinjani at 1 am….yup another hike in the dark 😉