It’s time to write about my latest trip. I have to do this as fast as I can because another trip is waiting 😉

I have mentioned it in my earlier post (here) that I have a long trip to Mount Rinjani in the Island of Lombok. The long trip is because of the bus ride. My trip to Mount Rinjani was called Jabaloka (I forgot to ask what it means, I think it’s Jakarta – Bali – Lombok), it was hosted Thoge Reog and Jarank Pulang. It was a cheap trip. Jakarta to Lombok is very far and the cost we had to pay for the trip was only around $120. The reason for the low price was because we rode all the way from Jakarta to Lombok. There were about 110 people joining the trip.

In December 23, 2014; we gathered at Gambir Station. It was 11 pm when everyone finally showed up.  The rented buses came passed midnight (this is a way to hire a bus as efficient as possible 😉 ). We left the station around 2 am…so basically we started our ride on December 24. We did nothing but sleeping. I felt a bit annoyed that the driver played music so loud. At that time, we were all so sleepy so we could ignored the loud music and I also thought that that was the way for the driver to stay awake…unfortunately the loud music continued throughout the ride 😦

In front of the bus

Nothing much to tell about the ride. I sat with two people, Azalea and Kiki and all we did was talking for a while and mostly sleeping.

I took a picture on our last stop on Java Island.

We reached Ketapang Harbour at noon on December 25. We had to cross the sea to get to the island of Bali. At Ketapang Harbour, we saw people swimming near the boat asking for us to throw them some money. They would dive to catch the money. You could also see these kind of people in Merak Harbour (on the west side of Java island). We also saw them at Gilimanuk Harbour (Bali). It was a dangerous way to make money but it’s difficult to stop those people.

It took about an hour to cross the Bali strait. 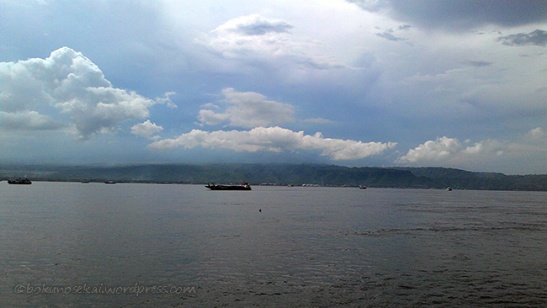 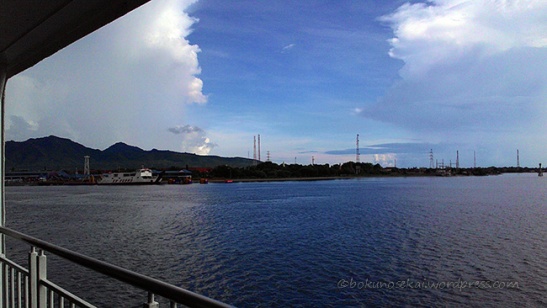 We crossed Bali without stopping, except for eating. I actually would love to take some pictures because all the houses in Bali has one similarity, each house has a small temple on the left side of the house.

We reached Padang Bai Harbour at night. We had to take another ship to cross the Lombok strait. Unlike crossing Bali strait, it took more than 5 hours to cross Lombok strait. it was late night and 5 hours felt ages when we had nothing to do. A friend I met in this trip and I shared money to rent a bed. Unfortunately there were almost no space left on the ship, so we put our bed on the side of the ship. We weren’t sure we could sleep because of the wind and people were constantly walking near us. BUT, tiredness beat all of those. We slept through the night. 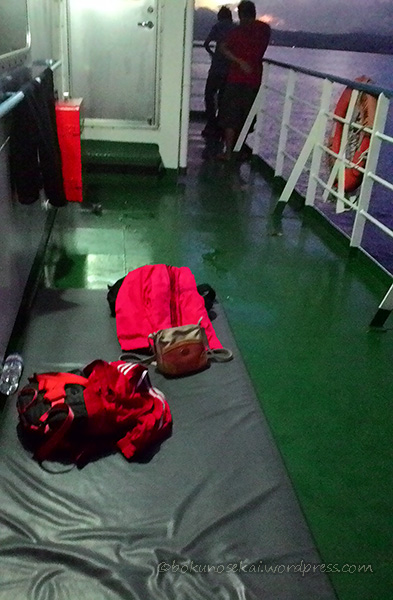 This is where we slept.

When we reached the island of Bali, the view was not stunning at all…fortunately, reaching the island of Lombok was breathtaking. I couldn’t stop taking pictures of the beautiful island and the awesome morning sky above the island.

These are my favorite pics of the island 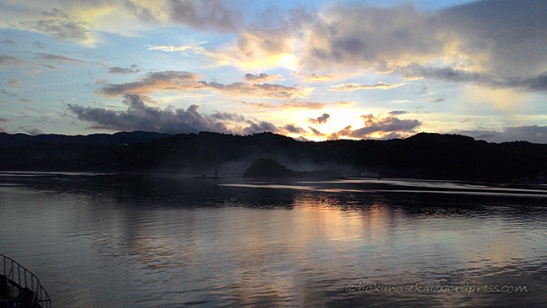 We got off the ship around 6 am on December 26.

We continued the ride to reach Mount Rinjani. We reached Senaru (the foot of Mount Rinjani) at midday. We where welcomed by drizzle.

We stayed at Pak Saat base camp. We all needed to repack our bags. My group consisted of 2 boys and 2 women. The boys carried our tent and logistic.

The plan was to hike from Sembalun and got down from Senaru, that’s why we left our buses in Senaru.

We rode on a pickup truck to go to Sembalun. There were 13 people in each truck. I took a chance to have a picture of the mountain that we would soon climb. Mount Rinjani looked menacing from a distance. 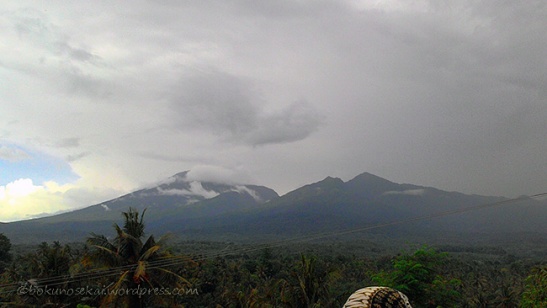 We started our hiking somewhere around 4 pm. We knew for sure that we would reached our first camping ground at night. We were so late, in the itinerary we should have started hiking in the morning but in reality we started this late. At least it wasn’t raining. 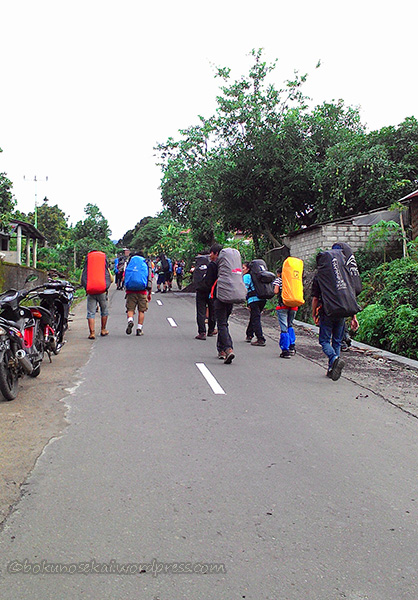 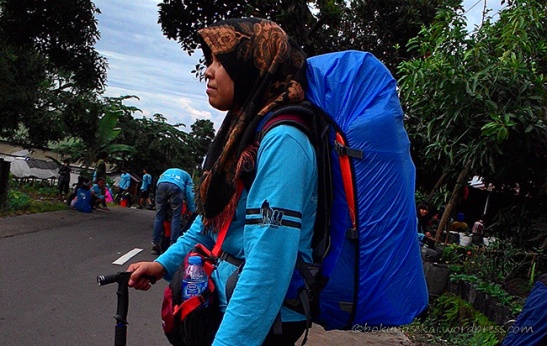 That’s all for now, I will continue it soon 🙂