Last week, I went hiking again (that’s why I was absent from blogosphere for few days)…I haven’t finished my Lombok/Mount Rinjani post and new hiking story is already waiting to be written 😉

Anyway, on my previous post, I closed it with this:

In the end, we didn’t go down at all because the rain didn’t stop. At night, there was storm. Our tent was shaken so badly by the wind. We were fortunate to have our tent between other people’s tents because a tent next to us was lifted a bit during the storm. One of my friends was in that tent and she told me how her feet was lifted because of the wind.

The next day, it was still raining. Sometimes, it was heavy rain but sometimes it was nothing but drizzle.

Somewhere around 5 AM, the rain almost stopped so we took that time to look around our camp and had some pictures. Our camp was in Plawangan, we could see the lake a lot closer compared to when we were on top of the mountain. From our camp site, the lake looks as beautiful as it was seen from above.

The mist was still quite thick but once it cleared a bit, we could see our beautiful surrounding.

The Lake seen from our camping site 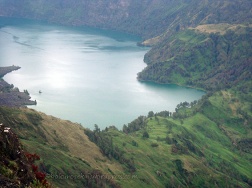 The view on the other side of the lake

The mist started coming down again

The mist almost covered the lake

There are A LOT of monkeys in Rinjani. If we left our tent, we had to make sure that we had closed all the entrance and no food outside because they will make a mess out of our tent.

Unfortunately, the beautiful Mount Rinjani is no longer as beautiful as it supposed to be because there are a lot of trash left by hikers. I didn’t take picture of the trash because it was a very sad view. Just like what my friend told me, “There are a lot of hikers now but there are less nature lover now”. A true hiker will carry his/her trash down from the mountain. The monkeys looked for food on the trash. 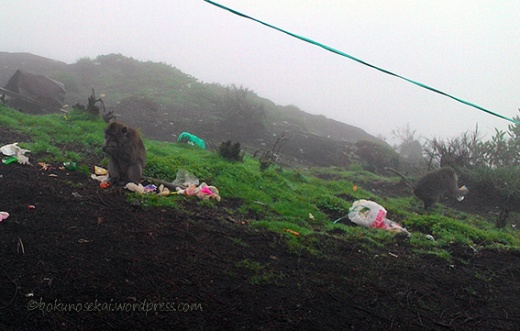 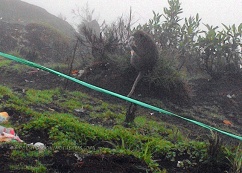 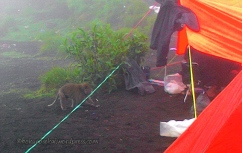 The rain didn’t stop but we had to start moving because we had spent two nights on Plawangan. We started packing even though it was still raining. We packed when it was just a drizzle but we stopped the moment the rain became heavier. This kind of packing made us spent more time to finish what we were doing.

Going down was a lot easier. There was only one spot that seemed to take forever because the soil was incredibly slippery. One wrong step could make us slip and fall down o our butt. It took almost (or maybe more than) half an hour for me. I used my hand to grab on the grass when it was too steep. When I finally got over that place, I know I had to take picture of it. Unfortunately the picture didn’t show how steep and slippery that place was.

Except for that place…the track was easy. It was solid rock and soil with root, my kind of trek 😉

Before we got over all Seven Hills of Regret (see previous post), I met two wonderful and inspiring people. The first one was an amazing 58 year old woman. Her name was Jessy. She looked so fresh for a 58 year old woman, she was an inspiration. I told her that I want to be like her when I am her age…I want to continue hiking, I want to stay healthy so that I can follow her step. Not long after I met her, I met a 9 year old boy with his father. He told me he had been to Mount Gede and Mount Ciremai. For me, Jessy and that boy are AMAZING!

After passing through the Seven Hills of Regret, the trek was very easy. I could run all the way down. It was easier to run than walk…but I took some time to walk so that I could enjoy the beautiful Savannah of Rinjani.

I hardly had long rest when going down because it wasn’t that tiring. I really enjoyed running all the way down. Just look at how plain the trek was. 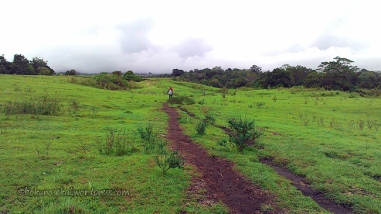 I even ran when I entered the only forest in in Rinjani’s trek through Sembalun. But I had to stop once in a while. 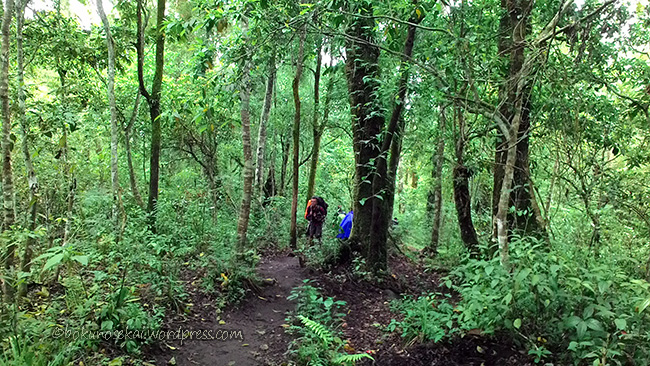 After passing through that forest, I walked together with our group’s guide. We talked about people in Lombok. Even though we are both Indonesian but we lived so far from each other, therefore some of the tradition are different. It was so nice to talk and share with Em (he told me his name is Em). Most people of Lombok are Muslim but even so they have different kind of interpretation on Islam. Lombok is known as the city of thousand mosques.

Before reaching our meeting point, we were once again passing through people’s paddy fields.

To my surprise, I came second after Ali and Pety (a couple from Jambi). I really wanted to get down so fast because I wanted to take shower soooo bad. 4 days in the mountain really made me miss bathing. Unfortunately we couldn’t shower in the house that we turned into our meeting point. I had to wait till more people reached our that place and headed back to our base camp.

While waiting for the others, I noticed how big Mount Rinjani is.

We went back to our base camp using a pick up truck. I couldn’t help taking another pictures of the mountain. Not a good shot because the truck was still moving but it still showed how big the mountain was. 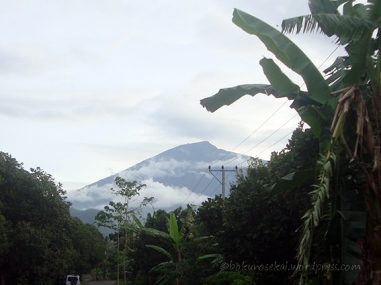 The minute we reached the base camp, I immediately headed to the bathroom…showering never felt so good! Most Indonesian shower twice a day, unable to take a shower for 4 days is really unbelievable.

We slept one night in the base camp. We still had one more place to visit before heading home…and that’s another story to share (soon)

To close this post, here are some group pictures of my new friends 🙂