As I have written in my latest Murphy News, Peaky Blinder series 2 will start this year…well this month to be exact.

It was aired on October 2, but I didn’t have to watch it that soon because I was on Holiday. I have just watched few hours ago and I have to say that I am liking it so far.

Just like in series one, I am not going to write a review for each episode because that will give a lot of spoiler to such a great TV show. Writing second episode here only means I have to spoil episode one….I will have to hold myself till all 6 episodes already been aired.

The first episode of the second series started strong. We immediately see two major enemies of the Shelby. Let’s move back a bit. This second series takes place 2 years after the first one (10 reasons why you should watch peaky Blinders) where the Shelby business has grown. However, just like everything in life, the taller you become the harder the wind blow. Someone has been watching Thomas and wants him to work for him/her (not known yet) by force. On the other hand, Thomas wants to expand the family business to London. Some members of his family are against his decision but Thomas is still the controller of that small family gang. Despite his touching speech about the business being a modern company where women will be heard, he still proceeds regardless what the women plead. 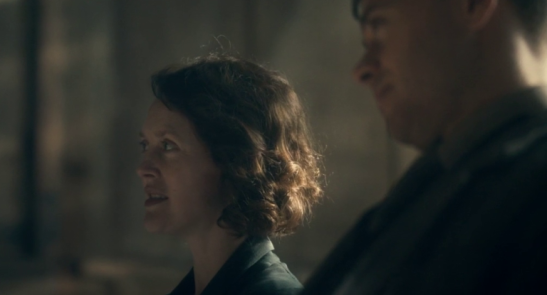 New enemy: don’t know much about them yet

We can also see that Thomas still has feeling for Grace. I am waiting for to show up tho not sure when. Apart from Grace, I am also waiting for Tom Hardy’s character. It’s going to be great seeing Cillian and Tom together again 🙂

Overall, Peaky Blinder series 2 still centered on the Shelby, especially on Thomas…but like series one, Steven Knight manages to make it interesting and somehow feels like an all around series.

The series still maintains its other great quality like the cinematography, the color tone and the great music. However, I still think that Cillian’s accent is a bit off sometimes. Arthur (Paul Anderson) still has the best accent so far. I haven’t heard the Burmy accent yet but somehow Arthur sounds the thickest of all.

There are a lot of old faces but we also see some new faces (looking forward to that). one thing for sure, Cillian has stated that he would love to continue playing his character:

“I think the Beeb are cottoning on to the fact that this is something that needs to be supported and allowed to grow,” Murphy says. “That’s what the American networks do so well. Steve’s got this worked out up to the beginning of the Second World War, and I would love to keep playing this character until then.” (Radiotimes.com)

Dear Cillian, I will wait for the series…because of you and because of the story.

Sam Neill returns as Chester Campbell and it seems that he has something up his sleeves, we don’t know what is it yet. Aunt Polly also has something she hides from the family and somehow I feel that the newest member of the family (John’s wife) will have more role in the family. Can’t wait to see more of them through the next 5 weeks.

If you live in England, do watch it every Thursday…if you live somewhere else, go find a way to watch it (like me).