Previously in One Piece 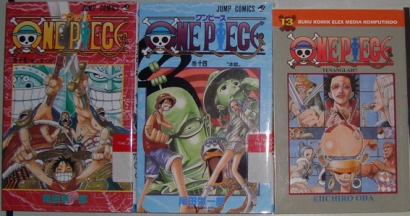 After refusing to accept Eternal Pose to an island near Arabasta from Miss all Sunday, Mugiwara Kaizoku headed to Little Garden, their second island in Grandline.

Vivi finally saw how crazy and relax this pirate crew is, she was a bit worried but Nami convinced her that they might look so relax but they will always ready when something happens.

They arrived at Little Garden few days later and Nami found out the meaning of the island’s name, the island seemed like little garden to giants who lived in that island. Luffy, Vivi and Karu went exploring the island together. Zoro and Sanji went to find the biggest animal they can carry as food supply. Nami and Usopp were left alone in the ship.

Not long after everyone has left, a giant named Burogy appeared next to Going Merry, he invited Nami and Usopp to his place. Meanwhile, Luffy was eaten by a dinosaur and helped by another giant named Dorey. He also invited Luffy and Vivi to his house. Both team (Luffy’s and Usopp’s) learnt that those two giants were actually friends but they needed to settle down their argument. It was the rule in their land, Erbaf. They had been fighting for 100 years and always end up tie.

Baroque Works sent their agents, Mr.3 and Miss Golden Week, to visit Little Garden and kill Vivi and Mugiwara Kaizokudan. Mr. 3 had another plan in his head, he was going to capture both giants because their head were worth 200 million Berry. He planted a bomb in one of the sakes. The bomb blew up inside Dorey’s stomach, but he was still fighting Burogy in spite of his bad health because running away from a duel means losing his pride.

Mr.3 helped Burogy to defeat Dorey, he helped Burogy without him knowing about it. Then, Mr.3 captured Burogy and held him with his candle power. He has doru-doru power, another devil’s fruit user like Luffy. Mr. 3 also captured Nami and Zoro.

Luffy was furious when he found out that someone had been messing with Dorey and Burogy’s duel. Dorey held him under his cave so that he won’t disturb his duel and told Burogy about his condition. While Luffy couldn’t move, Mr. 5 and Miss Valentine came to their place and took away Vivi.

Mr.3 set a giant candle and trapped Vivi, Zoro, Nami and Burogy in it. He was planning to make a wax statue from real human. I love this conversation between Zoro and Burogy:

Zoro: “Ojisan, can you still move? If you cut both of your arm and leg, you won’t be just another useless corpse. And I can still move if I cut my leg. Would you like to kick their ass together?”

Zoro: “we will die anyway if we stay like this, so why not die trying it? there is no reason for us to die in front of trash like them, isn’t it?”

Burogy: “Gabababa…you are a very high spirited boy, it seems that I have lost the will to fight. So…I will accept your idea”

Zoro was really cutting his leg when Luffy came to the rescue. When Luffy came, Zoro trusted his life on Luffy’s hand.

However, things weren’t as easy as they expected to be. Luffy was having a hard time because of Miss Golden Week’s power of suggestion. She could draw colors that will change people’s feeling. For someone as innocent as Luffy, those colors trap worked very well.

Thanks to Usssop, Luffy could be realized from the colors and fought back easily. Luffy, Usopp and Karu saved their friend from being turned into human statue. Luffy also kicked Mr.3’s ass.

On the other place, Sanji arrived at Mr.3’s little cottage. He pretended to be Mr.0 and answered a telephone call from Mr.0. He also took away an eternal pose from the unluckiest (another baroque works agents)

Without taking too much time, they headed to Arabasta. The giants helped them got through a giant sea monster.

Next destination is Drum Island where they meet their future ship doctor.

This is my dedication for The Best Manga Ever Existed, One Piece by Eiichiro Oda