I can’t believe my eyes when I looked at my old post about One Piece, the last adventure I wrote here was 2 years ago. I should start writing it all again till it reaches their recent adventure.

Their last adventure was in Little Garden, it was called Little Garden because to two giants living there, the Island was nothing more than a little garden.

The adventure in Drum Island only takes 2 volume as the enemy isn’t strong enough. 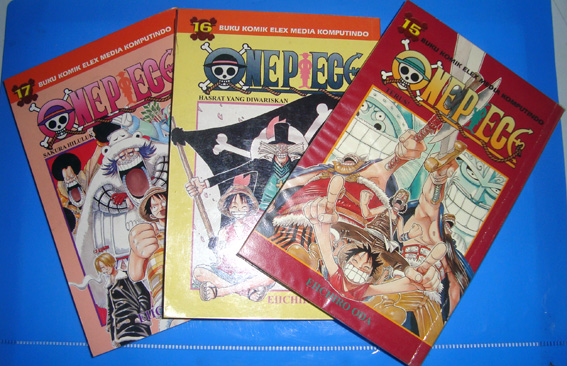 After leaving the Island with the help of the two Giants, Burogy and Dorey, they found themselves back on the sea heading to Arabasta to help Princess Vivi stopping the revolution.  But things weren’t as easy as they expected, Nami had high fever, so high she couldn’t move much. Nami kept her illness to herself because she didn’t want to worry Vivi. She read that the rebels was about to start the revolution soon. She must navigate the ship as fast as she could to Arabasta.

Vivi was a very wise Princess, she told everyone that she was indeed worried about her country but the fastest to get to her country could only be achieve with the help of the ship navigator, Nami. She wanted to find island with doctor in it to cure Nami and then continued their journey to Arabasta.

They found the Island called Drum Island. But before reaching there, they met an odd Pirate ship with captain who could eat anything because he had Baku-Baku power from Baku-Baku no mi (read more about akuma no mi (Devil’s fruit) here). Wapol the captain was easily defeated. When they arrived at Drum Island, the people of that island refused to accept them. They recently had bad experience with a pirate called Kurohige. That incident made them distrust all pirates.

Luffy who was ready to fight to get a doctor for Nami learned that sometimes fighting was not the only reason to get everything. Vivi taught him how to ask for help in the most polite way. 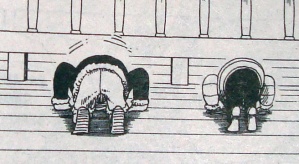 Vivi: “You can’t be a good Captain, Luffy. Fighting like this does not solve any problem. If we fight, how about Nami?

Luffy: “Sorry, I was wrong.” Luffy bowed his head to the floor. “Please call a doctor and safe our friend.”

Dalton, once a captain of Drum Island Army, accepted them and took them to his village. He told them about the Island’s sad history. The island was once ruled by a king named Wapol, he was a terrible king who liked to ignore his people’s needs. When Kurohige pirate came to the island, he took all the army force and the doctors away from the island. He wanted to safe himself because he couldn’t fight against Kurohige. He had no desire to protect his people.  He fled the country and became a pirate, temporary pirate.

Dalton also told them that the only doctor left in the island lived on a Drum Rock, 5000 meters from the ground. Luffy decided he could not wait for the doctor, he and Sanji would carry Nami and climb that rock. The journey to the top of Drum Rock was not easy, Luffy had to deal with Lapin (huge meat eater bunny) and Wapol who had just landed on his island. Wapol landed on Drum Island not long after Luffy and his friends, Wapol wanted to get back to his castle, the same place Luffy was headed…the castle was now Dr. Kuririn’s house.

Dr. Kuririn cured Nami, Sanji and Luffy. When they woke up, they saw a little monster named Chopper. He was a blue nosed deer who could talk because he had eaten Hito-Hito no Mi (a devil’s fruit who can turned animal into something similar to human). Dr. Kuririn told Nami about Chopper’s past.

Chopper was a lonely little deer, his deer family avoided him because of his blue nose, it got worse when could talk. All he ever wanted was to have a friend, but his human shape was more like a big monster than human. He was thrown with rock when he wanted to talk to children… Chopper, after all, was still a small kid. Dr. Hiluluk, a man without doctor license, accepted Chopper for who he was, he was also the one who gave him name Tony Tony Chopper.

In One Piece, flag means everything. I really like this part during the fight between Luffy and Wapol:

Wapol: (seeing a pirate flag on his castle) “And the last thing I allow here is that crazy doctor’s flag. It ruins the view.” Wapol shot the flag pole.
Luffy: (holding the flag) “ …it seems that you don’t understand the meaning of this flag!!”
Wapol: “Mahhaahhaahaa!! That stupid pirate symbol has no meaning to me!!”
Luffy: “ That’s why you are so weak!!
Wapol: “Stupid!! A king like me is impossible to raise a pirate flag!! Don’t raise that disgusting flag anymore!!”
Wapol started blasting on the flag, but Luffy didn’t back away.
Luffy: “you can never destroy it! Flag with this skull symbol is A SYMBOL OF FAITH!!! I don’t know whose this flag for and where it comes from, but this is the flag where you risk your life with!! IT’S NOT A JOKE!!! THIS FLAG IS NOT A THING YOU CAN DESTROY AND THEN LAUGH ABOUT!!

After defeating Wapol, Luffy asked Chopper to be his crew. He chased Chopper around till Chopper said yes. The new member of Mugiwara Crew was a little deer with 7 transformations and he is also the ship doctor 🙂

Their departing moment was celebrated with Dr. Hiluluk’s final dream, Sakura is blooming in Drum Island, a winter island with spring flower.

I love this series so much!! It has so many good moral values. Their next adventure will be in Arabasta, but before that I will write about Chopper and Dr. Hiluluk.

This post is part of my dedication for The Best Manga Ever Existed, One Piece by Eiichiro Oda.