Does the waiting worth? Yes….bloody freakin YES!!!

No matter how many TV Series I have watched in 2013…none can compete to Sherlock. It is still my number 2 most favorite TV Series! Sherlock has totally beat all the series that came up between Sherlock 2 to Sherlock 3.

First of all, for those who haven’t seen Sherlock series 2…I urge you to close this page because this review is a MAJOR spoiler to what happened in the closing of series 2.

Second, this is a spoiler free review but I do have hidden spoilers and don’t be tempted to see it because it’s better to watch the first episode of series 3 without knowing anything.

Do watch this mini-episode before you start reading 🙂

As we all know it (if you have seen series 2), Sherlock faked his death in series 2 finale…that last episode (The Reinchenbach Fall) had made sooo many Sherlockian created one theory after another of how Sherlock faked his death (this is my guess> here). In this first episode of series 3, DON’T EXPECT to see it being reveled…it kept you wondering whether the theory was correct or not.

“Sorry, but the holiday is over, brother dear. Back to Baker street, Sherlock Holmes.”

I love the acting. Sometimes I wonder why Martin Freeman won BAFTA while Benny didn’t…I am not saying Martin is not good, I meant why not the two of them won BAFTA…seeing this The Empty Hearse, I can see clearly why Martin won, the emotion and the expression of a John Watson is more difficult than of a Sherlock Homes. When the two met, it was so clear which character needed an extra acting ability…John’s facial expression was amazing.

“We have to get rid of that. He looks ancient. I can’t be seen wandering around with an old man.”

And I love seeing everyone back on the series…I am so happy none of the characters are played by other actors. I miss seeing how Sherlock deducts things and how John reacts on every Sherlock moves…and the awkwardness of Molly Hopper, Mrs. Hudson and her love for the boys, Greg Lestrade and even Anderson.

Just like the two previous series…I love the dialogue…I can’t stop quoting it, I wish I can get my hand on the script (the whole series) because it would make a fascinating read. The dialogue is both funny and witty…and of course, for Sherlock’s part, it’s bloody difficult to memorize.

One of my favorite lines of this episode…because it’s hilarious!! (SPOILERS … block it to see it)

Now, let’s talk a bit about the story. Sherlock returns to London because Mycroft needs his help to uncover a future terrorist attack. If you have a best friend faking his death and suddenly showed up, will you be angry at your best friend? It’s a simple human nature…John is piss off with Sherlock. The meeting scene is very funny!! I laugh so loud. This is one of the reasons why I love Sherlock, it’s funny without trying hard and make it look like a comedy show. There are so many funny scene…I love it! And of course the great detective and his amazing deduction is a great treat for all Sherlockian.

My final word for this first episode of series 3 is : The waiting is totally paid off!!!

Episode 2 will be shown on January 5 at 8.30 pm (of course England time not Indonesian time 😉 )…can’t wait to see it!!! Looking forward to see Sherlock in John’s wedding…The episode is called The Sign of Three.

John: I asked you for one more miracle. I asked you to stop being dead
Sherlock: I heard you

I love seeing the dynamic duo back together again 🙂 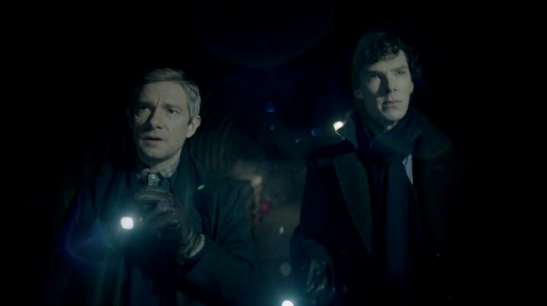 There’s a moment that I love the most in this episode (SPOILERS : it’s when Sherlock rushes through fire to save John…I think that’s really beautiful and shows how much John meant for Sherlock) Picture> here.

I couldn’t help it, I have to share these two HUGE spoiler pictures, two very funny scenes 😉 here and here.

Watching Sherlock again makes me fall in love with Benedict Cumberbatch all over again…I never stopped being a Cumberbabe but anyone can see that Benny as Sherlock is clearly his finest look of all his characters…black hair, long coat, arrogant and annoying…just perfect!!

…and don’t forget to visit The Personal Blog of Dr. John H. Watson 😉

16 responses to “Sherlock – The Empty Hearse”