A team of scientists are thrust into a potentially life-or-death situation in this thriller, which begins with the group being deployed to the Arctic to secretly investigate what could be a disease outbreak.

I was in the mood to see something by one of my favorite Japanese actors, Hiroyuki Sanada (first known to the western world through Last Samurai) then I found that he had a couple of series in US, Helix and Extant. After seeing the trailers and reading the synopsis, I am not interested with Extant (maybe I have a peek on it one day) but very curious with Helix.

I watched one episode and instantly glued to it, if I didn’t watch it during school day I would have finished the whole 13 episode in one go…but I had to teach the next day and ended up watching 4 episodes straight away. That was how good the series is.

All the characters (I am always into characters when watching movie and TVseries) are interesting to see. Most of them have something they hide from others. 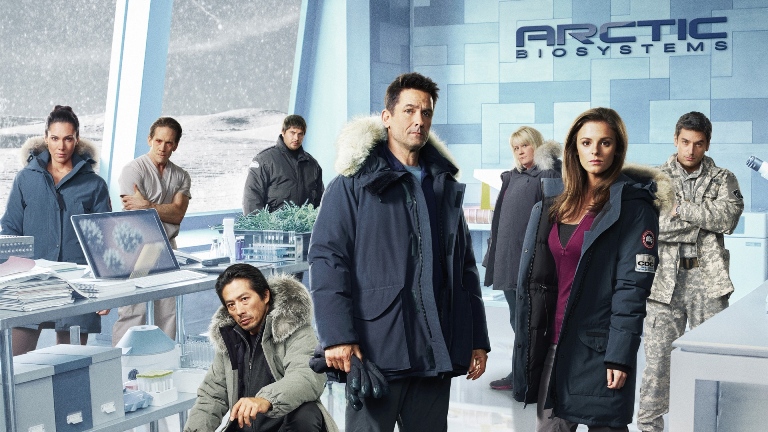 A group of CDC’s scientists led by Dr. Alan Farragut (Billy Campbell) went to Arctic Biosystem, a huge research station owned by a company called Ilaria. There was a virus outbreak in that place. Dr. Farragut’s team consisted of Dr. Julia Walker (Kyra Zagorsky) who used to be Farragut’s wife, Major Sergio Balleseros (Mark Ghanimé) who worked for the army, Dr. Doreen Boyle (Catherine Lemieux), and Dr. Sarah Jordan (Jordan Hayes). They were welcomed by the charismatic and mysterious Dr. Hiroshi Hatake  (Hiroyuki Sanada). Dr. Farragut’s main reason to come to the station was because the virus victim was his brother, Dr. Peter Farragut(Neil Napier).

Finding the nature of the virus was a bit difficult because both Dr. Hatake and his adopted son, Daniel (Meegwun Fairbrother) who acted as the head security of the research station had so many secret to hide from the CDC team. One thing for sure, there was something special about Julia Walker. We found out what it was on episode 6, but I sort of already guessed it.

What I like about Helix was the constant thrill and mystery. It was nice to see how the story shifted slowly into something unthinkable, the virus changed the vectors (the people infected by the virus) into something zombie-like. Although they were like zombies but they didn’t eat people they only wanted to spread the virus to more people. Each episode left me on the edge of my chair, getting so excited to know what will happen next. It reminded me of how I felt when watching The X Files. Unfortunately, after knowing the origin of Dr. Hatake, the story slowly drifted into something a bit odd…a bit out of the place and somehow felt a bit too much. When Ilaria people came, the story shifted too wide from the virus tale. However, despite the lack of interest toward knowing the existence of Ilaria, the series was really good…I enjoyed it a lot.

As I have said in the beginning of the post, I have no interest to see the second season because I know that it would focus more on Ilaria…I would watch it if it stayed about fighting new viruses not about Ilaria.

I have to admit that I enjoy the series mostly because of Hiroyuki Sanada’s performance. He was so charismatic (as always) here, he showed more charisma than everyone else in the series. Just look at the picture below, charisma is oozing from this man.

…and the most touching moment in the series was when Dr. Hatake cried over someone (I wouldn’t say because it’ll be a huge spoiler).

Overall…Helix is a great series, I highly recommend it to all thriller and sci-fi addict 🙂