The Girl Who Leapt Through time is made by the animation studio Madhouse and directed by Hasoda Mamoru. It was published in 2006 and will be made into Live Action Movie in 2010…I want to watch it, I hope I can find its DVD next year. After doing a little search, I found out that Toki o Kakeru Shoujo was based upon a novel by Tsutsui Yasutaka. When I read his name, it sounds so familiar…I went through my book review and found my review of one of his books, it was called Hell. I wonder if the JF-Library has this book, I want to read it.

Toki o kakeru shoujo didn’t have good record as massive box office movies, but it received various kind of award including Japan Academy Prize for Animation of the Year. It defeated an animation from Studio ghibli, Gedo Senki (I have this animation and will watch it soon). It has been dubbed into English, but I will never watch the dubbed version because I like watching movie in its original language.

The story is about an ordinary girl named Konno Makoto (Seiyuu: Naka Riisa) who had the worst day of her life. But that day was about to change when she fell down in the science lab. On her way home, she couldn’t stop her bike and was about to be hit by a train, but miraculously she ended up hitting a woman. Out of confusion, she told her aunt about it. She told Makoto that maybe it was a time leap. Makoto tried to prove her auntie’s words and found out how to do the time-leap successfully.

She started using her new ability to change her worst day into the best day of her life. She repeated an hour of karaoke with her best friends, Tsuda Kousuke (Seiyuu: Itakura Mitsutaka) and Mamiya Chiaki (Seiyuu: Ishida Takuya), into 10 hours of karaoke. She kept using her ability to change small things. She soon realizes that what she had changed also changed the life of people around her.  Kousuke refused a girl’s love because Makoto has better score than Kousuke and he needs to study more than going out with girl. Makoto refused to believe that Chiaki likes her and somehow that made Chiaki started liking Yuri.

She was determined to set things back to normal. She found out that her leaping ability was numbered, she couldn’t leap as much as she want. When things is about to be normal again, she ran out of her leaping chances to save her best friend. In the brink of her confusion, time stopped. Someone close to her told her about her leaping ability. 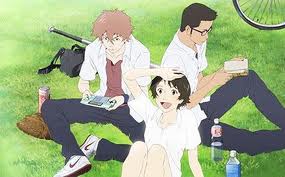 I can’t write more than this because it will give too many spoilers.

There are many funny scenes that make me laugh so hard. My favorite scene is when Makoto tried to go back and changed the conversation between her and Chiaki, at that time, Chiaki was telling her about his feeling. It was freaking hilarious.

The story sounds very simple right? But watching it truly gives warm feeling. I love every moment of this animation. The love story also fit perfectly with the science fiction. Makoto’s character is enjoyable to watch. Chiaki is so easy to love, the kind of caring bad-boy you find in high school. Kousuke is like the wisest of all three. I don’t know if the human version will be as good as the animation or not, but I will watch it nevertheless…unless if the one who makes it is Hollywood, I will think twice to watch it. Hollywood has tendency of ruining good animation, here are some examples: Dragon Ball, Blood the Last Vampire and The Last Airbender.

My rating for this animation is 4 Stars out of 5 (I really like it).  My friend Dhitzunako wrote a great comparison between the 1983 movie to this anime here.