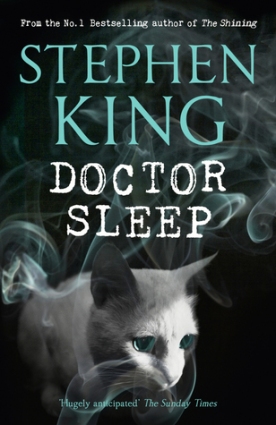 I have been meaning to read this sequel of The Shining ever since the book was released but I have been busy. I have finished the book a month ago and again being busy kept me from writing the review till this day.

If you have read The Shining, it’s hard not to compared that book with this one…however, even though people call Doctor Sleep as the Shining sequel but I can easily say that they are more like stand alone novels. Some of the characters are connected but the story itself is so far apart. You can read Doctor Sleep and understand everything without having to read The Shining first.

In term of horror and thrill, The Shining wins all the way. I remembered feeling so scare while reading it, something I didn’t feel while reading Doctor Sleep..BUT that doesn’t make Doctor Sleep less interesting. It still has King’s style of unexpected turn of story. Many people seemed to dislike the book and kept comparing it with The Shining, for me Doctor Sleep only lacks of horror but the excitement is the same. King’s book can always take me away from reality and live a moment in the pages of the book, that’s why I love him.

After escaping from the accident in Overlook hotel, little Danny Torrance was still being visited by the evils in Overlook but he finally learned to control it. The story shifted to the grown up Danny who was now called Dan. Dan turned up to be just like his father, like father like son so they said, he was a drunk and very emotional. He moved around from city to city and kept changing jobs, it happened because of his inability to stay away from alcohol. One specific incident that shamed him for being a drunk lingered in his mind forever.

One day, he stopped in Teenytown. He saw his old imaginary friend, Tony standing in a window and somehow the town had made him stay. He struggled to stay sober. He finally settled down and used his shining to help old people passed on, that’s why he was called Doctor Sleep.

Out of nowhere, Dan was visited by a little girl named Abra who lived far from where he lived. Abra has the brightest shining he has ever known, as he said if he was a torch then Abra is a lighthouse. Through Abra, Dan learned that there were people – more like monsters – who continued living by sucking the steam of gifted children. The steam is another word the shining. Those people had killed thousands of kids just to continue living. They wanted Abra because Abra had amazing amount of steam and also because Abra had challenge the leader. Together with Dan, Abra tried to find those people and destroyed them.

I really like the story, I really like the grown up Dan. Reading Doctor Sleep kinda bring back some old memories. Like I said above, King’s book always brings me to a different reality and that’s why it feels like visiting an old memory. It might sound crazy but reading the grown up version of Dan is like reading the grown up version of a friend I have known a long time ago. And King did justice to how he brought Dan into a grown up world. I know that Doctor Sleep is more to Abra and Dan but I can’t help feeling attach more to Dan than Abra. I like how King writes about Abra, she sounds just like most teenagers, a bit proud and too cheerful. I also like Rose, she is such an elegant monster. And as always, I like how King makes simple thing, simple people, simple situation into something scary.

Although I like Doctor Sleep but I can’t give it a full 5 stars rate because it lacks the element of horror, but it is still one hell of a read 😉

Like Loading…
Previous: Back to Back Ghibli : The Wind Rises & The Cat Returns
Next: Ruth’s Recommendations : Her and Birdman