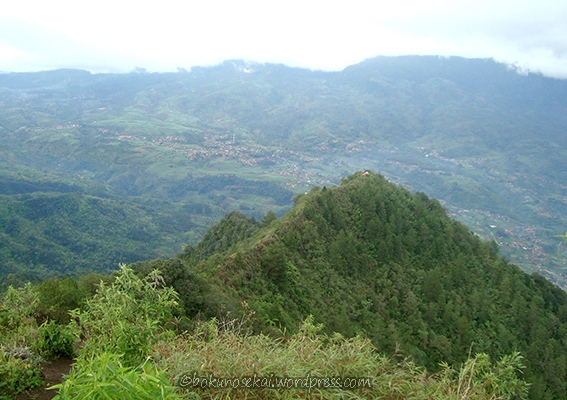 It’s time to finish my post on Mount Rakutak 🙂

I did said in my previous post (Mount Rakutak – Day 1) that Mount Rakutak has a lot of stories to tell, and I’ll try to sum it all today 🙂

I left you with us enjoying the Sunset on top of Mount Rakutak. We slept quite early because we had to descent the next day. Nothing much happen, I like the fact that Our tent was big enough for 5 people but it was only filled with 3 girls.

Early in the morning, we woke up early to catch the Sunrise. Here in Mount Rakutak we didn’t have to do any late night hike because we already reached the top in the afternoon. WE all woke up almost at the same time and walked about a hundred meters from our camping site to find a better spot to see sunrise.

The first thing I saw was the majestic Mount Cikurai (which I have visited on June 2014)behind all the morning cloud. The sun hadn’t shown her face yet.

The view on the other side was our group’s other camping site (the site was divided into two because the area was too small to have all the tents there). That spot was the perfect place to see the wonderful surrounding below the mountain. We went there before the sunrise to see the view and joined with the rest of our group.

Those small colorful dots were our friends’ tents

On one side, we got to see Mount Cikurai hiding shyly behind the cloud

On the other side, we can view the scary path called Sirathol Mustaqim. The narrow path looked better without the fog that surrounded it when I passed it through the day before. It was really green but one wrong step there could end up dying in that green. 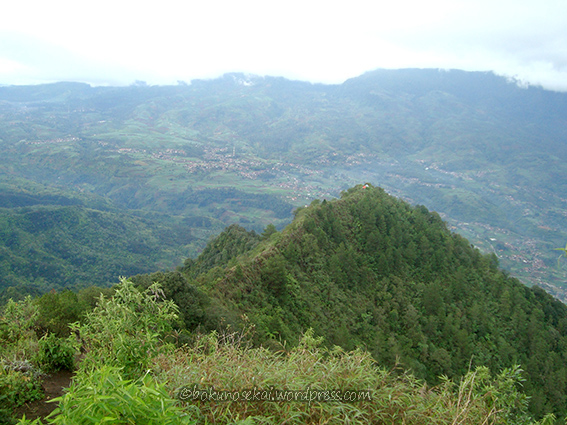 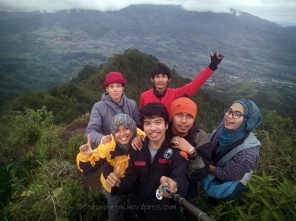 We could see mountain all around Mount Rakutak. It was a wonderful view but also scary at the same time because at that time we could see how Indonesia is full of active mountains ready to blow up anytime. 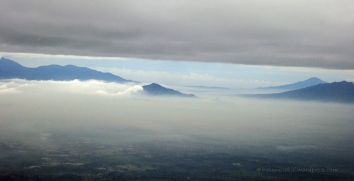 Fortunately it was a bright morning so we could see the tiny houses down below. 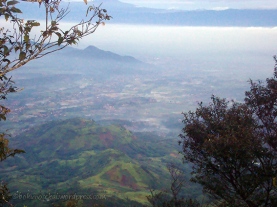 So clear that we could even see the last warung that we visited the day before. (see previous post> here)

Around 7 am, we went back to our camping site and began packing as we were going to start descending to Ciharus Lake. For me, it’s always double fun to climb from one side and down from another side.

The view we were going to pass 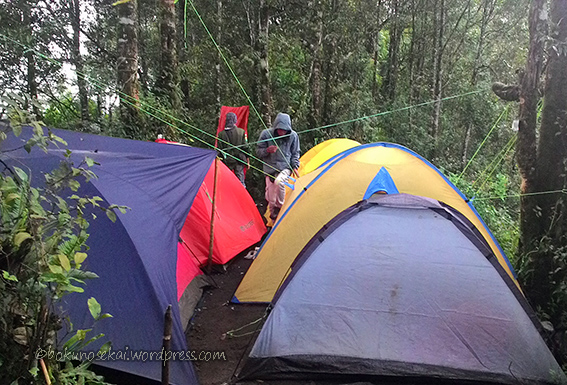 Even though we didn’t pass through the scary Sirathol Mustaqim anymore but that didn’t mean the trek became easier. We still walked along the ravine.

Passed through the ravine, we still had tough trek. The trek was rarely used (Mount Rakutak is not famous therefore, people rarely visit the mountain) so at some point we had to dug to pass it. 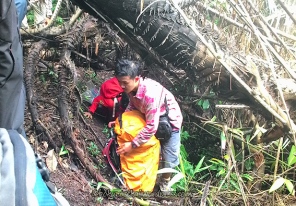 None of us ever been to this side of the mountain. We reached a T-Junction and weren’t sure which trek to take. We went to the right and found that the trek was blocked by a river. Then we went back and followed the trek on the left. The trek looked more promising. We walked for about one hour when finally heard a man’s voice, the local people. We asked him how to reach Ciharus Lake. He told us that we had taken the wrong road, we should have gone to the right trek. We went back again.

At first, we were a group of 7-8 people when we reached the T-Juction we gathered with the rest of the group (around 28 people) and decided to stay close because none of us really know the trek. We started looking around for sign, like ribbon tied to a tree. We saw the sign and followed it. The sign took us to an unusual path. We had to walk again the river stream. It was a very wet trek because it was raining and the river stream was quite fast.

We walked from one river to another. It was like a never ending wet-walk. Fortunately, we finally arrived there. One of my tentmates, who came about half an hour later, was already in shock due to tiredness. She had this blank face. Once she had been given hot tea and some food, she looked much better. We had a nice rest in the only warung (small shop) near the lake. Too bad it was raining, the lake didn’t look that great in the rain.

We asked Pak Aceng (the warung’s owner) how to get Bandung. Ciharus Lake is in between Bandung and Garut (two cities in west Java). He told us to take the trek to the left for about one hour walk. We followed the path used by motocross bike because we were so sure it will lead us to the city. At one point the trek was a bit difficult to walk through. We followed another trek which looked easier. We were all unsure with the trek. We then followed a red ribbon on tree. We had walked about four hours, it was not a one hour walk like Pak Aceng said. Then we saw the lake again.

Fortunately Pak Aceng is a nice man, he gladly accepted our request. He would take us to his house in Garut. We started our walk to Garut right after 6 pm. It was getting dark. All the girls (6 of us) walked first, right behind Pak Aceng and the rest of the boys followed behind. There were two people with trouble on their legs…so the walk that only took less than two hours for Pak Aceng had become a four hour walk. We ran out of water, we were so tired but we continued walking. Pak Aceng told us that we were lucky because we only got lost for 5 hours, he once met a group that got lost for 3 days. Pak Aceng had been selling food and drink on that lake for more than 20 years. He told us some turns that would bring us back to the lake. The road there full of tricks.

Walking to his house was more like a zombie walk…we were so tired and yet our feet continued walking as if on reflex. But the view was great, we got to see the grand Mount Ciremai, the mountain was huge. I have just visited Mount Ciremai last weekend and will share the story soon 😉

Like I said before, Mount Rakutak is full of story 🙂

It’s not a high mountain, only 1922 metres above the sea level but descending it is longer than mountain with height of over 3000 metres. We climbed up around four hours (less than that is we speed up) but we descended for almost 12 hours (including the getting lost time).

Apart from that, this is the first time my blood got sucked by 6 pacets (small leeches) >> see the image> here. They were having a party. one on my left hand, one on my right arm, one on my right leg and three (side by side) on my left leg. It left this red mark after the blood stopped.

Our trek look something like this (from google earth): From Pacet (name of a town not the small leech) in Bandung to Kamojang in Garut. The red mark is mount Rakutak and the white one is Kamojang. You can also see the lake there.

Every mountain has its own story 🙂 can’t wait to go to another one!!

you can see some videos (I don’t put them here because it’s already too much photos here) here> Around Mount Rakutak, Sirathol Mustaqim, Ciharus Lake.