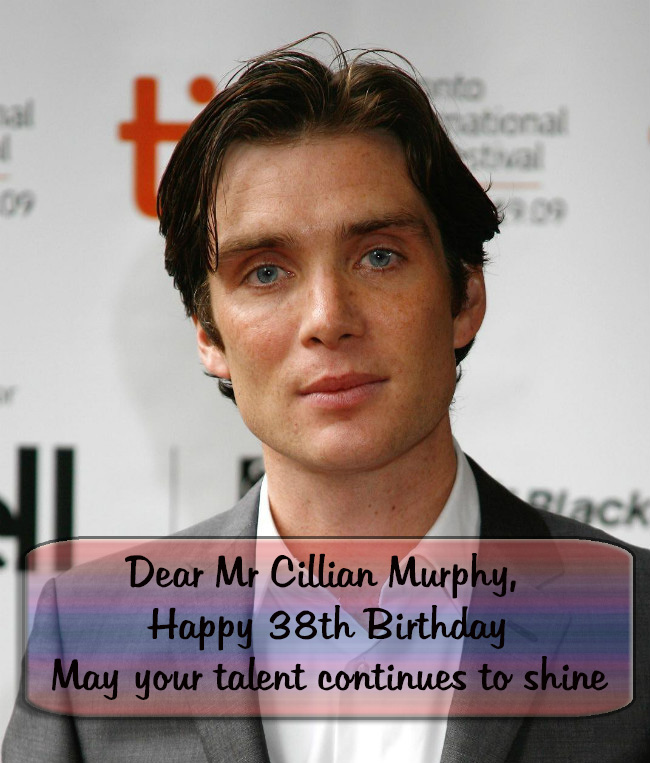 Quotes about him from people who had worked with him:

“Cillian gave this performance that really came from the inside. It wasn’t about the fact that he was wearing a purple feather boa or had a bit of blusher on his face, it was about a boy. He made it very emotional and very real and that’s when I thought that if I was to make the movie, Cillian should do it. It goes back to what I was saying earlier. He approached it solely from the point of view of character. With Cillian playing him, Kitten became almost real; it was as if the character drove the movie forward. So unique and so special, and so recognisable in a strange way”

“I would love to work with him again and love that Nolan values him as well. He’s still underrated.”

“Cillian Murphy is an extraordinary, polyhedral actor, intuitive and fast as lightning, full of truth, able to make everything sound real: he’s a gift for a director, and brings to his character a mixture of purity and disturbing obsession….”

“And in Cillian Murphy we have an actor who has the intensity and courage to push himself to the limit. Working to all our potential I hope and believe we can offer a slice of Ireland and Irish theatre that feels dangerous, deeply unsettling, and challenging for any audience.”

“All his sensibilities are correct for the part,”

“He has the most extraordinary eyes, and I kept trying to invent excuses for him to take his glasses off in close-ups.”

“I’ll tell you what’s really interesting about Cillian which I hadn’t suspected. I never thought not just in relation to him but to anyone. He’s a serious stage actor. I have incredible stage fright. It’s awful. Filming holds no fear for me. It’s just where I live.

“But he [Cillian] is the absolute polar opposite. He’s really nervous about film. I really like that. I actually admire it. Every film is a battle which I think is very useful.”

“Mr. Murphy, who plays a Renfield-like character with appreciable wit in “Batman Begins,” makes enough of a picture-perfect villain here that his agent should worry about typecasting. The actor may not be remotely believable as a man of international mystery, but those baby blues look cold enough to freeze water and his wolfish leer suggests its own terrors.”

“In a genuinely virtuoso performance, Murphy thus uses the minute detail of a film actor – his flickering eyes and expressive range are deftly eloquent – together with an impressive physicality that fills the stage.”

“To describe Cillian Murphy as amazing in Enda Walsh’s one-man show Misterman barely begins to do justice to the actor’s performance.”

Quotes from fans and movie lovers:

Thank you SO much to anyone who had participated, it meant a lot to me ((hug))

“It’s only 3 years ago that I discovered Cillian. It wasn’t love at 1st sight but he sort of intrigued me and now he got me enthralled with his acting and his persona.I’ m looking forward seeing his stage presence on theatre on in London this fall”

“cillian murphy.. I can’t describe my love to him. One word for Cillian Murphy is…fabulous!! and i love his blue eyes :)) love you, om!! xD”

“Already as 8 years I kept on a leash icy eyes of C.M.
But one beauty without talent would be an empty shell!
I respect his restrained style of play, well thought body mobility and facial expressions, rich tone of voice.
Happy birthday, Cillian!”

“The stunning man… I like him since I saw him play in Red Eye. He has such a classic handsomeness in him, cold beauty and those damn hypnotic eyes. Great actor. Happy bday Cillie, best wishes and big success ahead.”

“Cillian is a fantastic actor.  His boyish good looks make him very appealing, but he doesn’t let them hold him back.  I look forward to many more years of excellence from him.”

“If Cillian Murphy was the topic of conversation at a dinner party, I would be able to tell everyone about him and many of the movies he’s been in. I think he’s a great actor, but I have to admit, the reason I know so much is because of Novia. I love her posts about him so I try not to miss any. Happy birthday Cillian!”

“28 Days Later” The Zombie Apocalypse and Cillian Murphy? Who could ask for more? Not this wee Catgirl.”

“Cillian Murphy is handsome and handsome men can make a decent acting career out of looks alone. He is also talented as his wide acting range shows. Whatever the role, serious or light-hearted, he shows a humanity and charm we can dream about.”

“I have never loved an actor as much as I love Cillian. His deep blue eyes captured my attention but his talent and dedication in acting captured my heart.

Quotes from the man himself

22. “I’ve always admired the actors that do both film and telly and theatre and are just like working actors – not movie stars”

23. “I’m interested in stories that put people under pressure.”

24. “I’m a vegetarian who occasionally eats meat and fish,”

25. “I’ve always thought, just judge me on the work. What else matters? I’m an actor and that’s what I do.”

26. “I’ve always felt that the less the public knows about you, the more effective you can be when you go to portray someone else,

28. “Some characters are just a slight adjustment, and some are a great distance away from you. I like to do research.”

29. “I’m freely resigned to the fact that no one has a flawless CV, some things work and some things don’t, but you try.”

30. “Sex or violence is justified if it’s not gratuitous or fetishised. If it’s there just to look cool or sexy, I’m out.”

34. “I find it distressing walking down the street being photographed as myself. I’m simply no good at it.”

35. “I like performing. I like being the center of attention in a room full of people, not as myself, but as my character. I get a huge kick from that like nothing else.”

37. “For me, film choices depend on the script, not the genre”

Once again, happy 38th birthday Cillian Murphy.
Don’t stop being the down to earth actor that I love.