Today a year ago: The band that I love the most for the past 12 years held an unforgettable concert in my country. A year ago, I have been waiting for them for 11 years.

Here is EVERYthing I have written last year:

Because today is Thursday, so I think the best way to celebrate May 2nd is to share a random list of  me and  the most amazing concert I have ever seen in my entire life.

In case you come here from Thursday Thirteen: L’Arc~en~Ciel is a rock band from Japan that I love more than ALL the bands in the world, past present and future.

I LITERALLY cried when I found out that Laruku (shorter way to say L’Arc~en~Ciel) has announced Jakarta as one of the city they will visit on their World Tour.

>> I cried because for the past 11 years I thought they would never come to my country as the promoter always brought western bands, never an Asian band. It was a tear of happiness.

I was in the middle of a meeting with my former boss when my friend texted me that she had bought the ticket for VIP class. When I read that, I couldn’t hear what my boss was talking about and she let me had a moment of joy before continuing the meeting.

I and some other Laruku fans I have never met before shamelessly posed in front of their huge billboard because we all knew that the billboard would be taken down after the concert.

I went to Lapangan D, Senayan, just to see the venue and look at the stage being prepared. I have never and will never do such thing with other bands. I even went to the airport hoping to see a glimpse of them, I never did that toward other band.

I rearranged ALL my teaching schedule so that I had no class a day before and after the concert.

The concert started at 8 pm but I was already there at 8.30 am. I wanted to be in as close as possible to the stage. Unfortunately, the queue arrangement was terrible and I almost lost my spot if I didn’t fight back. I am glad I was there in the front row, 2 meters away from the band.

Even when I was already standing in front of the stage I still need to pinch myself to make sure that it was all happening and not just a dream. As it got closer, I kept saying “Oh My God, it’s real, right? I am finally going to see them live!”

Thunders and drizzle happened few minutes before the concert started and there was an announcement saying they would postpone the concert until the rain stop. We were all worried that the concert could be cancelled. Thank God the drizzle stopped and the concert began.

as I have said it above: IT WAS THE MOST AMAZING CONCERT I HAVE EVER SEEN IN MY LIFE!!!

>>even my friend told me that it was the best night of his life, better than his wedding night.

I couldn’t stop crying throughout their ballad songs: Hitomi no Juunin and Anata.

Here’s Anata. The lyric is so beautiful and the melody is so enchanting…my tears were like a river stream, it kept running while I sang along. Even the sky cried with us, for just this song, the drizzle started again…when I look up at the sky, the water fell down in slow motion and made everything more beautiful.

Hyde ONLY let the audience to sing part of Driver’s High and 4th Avenue Café in Indonesia (except for Japan) because everyone who was there couldn’t stop singing along with them. Hyde trusted us because he knew we could sing the lyric well.

I know for sure that Hyde heard us singing Bless when the concert was over. We sang part of Bless lyric as a way to thank them to come to Jakarta

You have come a long way
Everything is for today

Hoping I am not bedridden or 9 months pregnant when they come again for their second concert in Jakarta. Other than those two reasons, I will make sure I am once again singing along with them 🙂

These list must sound like a teenage girl’s list to you but I am way over 30 and yes I act like a teenager when it comes to L’Arc~en~Ciel and I am not ashamed of it, I am proud of it.

I will close this post with a photo of me and my friends (from a magazine called Hotgame) holding my banner saying : I have been waiting for you for 11 years, thank you for coming to Jakarta. And yes, I can see clearly that Hyde and Tetsu read the banner and smiled.

And of course the picture of L’Arc~en~Ciel 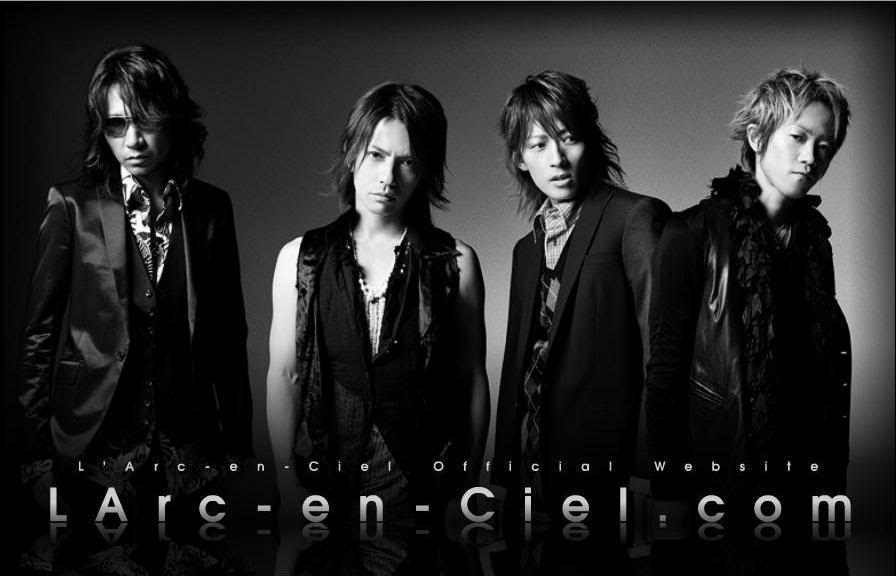