Time for another Doctor Who review 😉

I have mentioned in my Doctor Who series 5 review that Matt Smith is my least favorite Doctor and I am not that keen of his impersonation of the Doctor…however, I am glad I stay with him (meaning I didn’t ditch Doctor Who because the new Doctor was less interesting than the previous one)…I am glad because Matt Smith’s version of The Doctor has finally got into me 😉

I think one of the reasons I couldn’t warm up to Smith in series 5 was because series 5 was a bit of a letdown. After the amazing series 4, series 5 felt so plain. FORTUNATELY, series 6 was a knock out! I love all the episodes and it’s far more interesting than series 5. Each episode made me accept the quirky Doctor more and more.

Although I am still going to say that Tennant is my favorite Doctor, but I am beginning to enjoy Smith’s version of The Doctor 🙂 I am also warming up to the Doctor’s companions, Amy and Rory…mostly Rory. River Song also pops up occasionally.

Series 6 had 13 fascinating stories that completely glued me to the television set. I finished them all in 3 days, I could have finished them all in one day if I had a 13 hour free time. They were a series of amazing journey. I was all pumped up again 🙂 The feeling was just like when I enjoyed all the episodes from series 1 with the ninth Doctor to series 4 with the tenth Doctor.

The Impossible Astronaut and Day of The Moon. The series began with a double episode which reminded me so much of The X Files (yippi). The Doctor invited Amy, Rory and River Song to a certain place in USA. An astronaut suddenly showed up from the lake and shot the Doctor…yes, the series began with the death of the Doctor. Quite an opening, don’t you think?

But then the Doctor, 2000 years from the past, came because the Doctor from the future invited him too. Together they went to 1969 where President Nixon kept getting a phone call from a little asking for help. They must fight against the creature that had lived on earth far longer than us – human. They must fight The Silence, an alien breed who could make people forget their existence the second they look away. They had to play serious trick to beat the silence.

…and may say, I finally see charisma coming from the quirky Doctor 😉 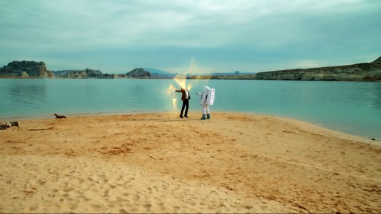 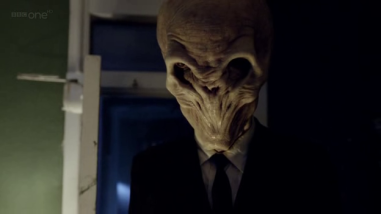 Day of The Moon

The Curse of The Black Spot. The three of them landed on a pirate ship, a cursed one. When a crew got injured, even a small cut, the crew would be marked by a black spot on his palm. A green woman suddenly rose up from the sea and took the marked person. They called her The Siren. Unfortunately, Rory was marked too.

The Doctor’s Wife. This is a special episode as it is written by the famous Neil Gaiman. I have heard so much about him and had been meaning to read his book, and seeing this episode made me more eager to read his book (unfortunately, I went to a bookstore yesterday and it didn’t sell any Gaiman’s books…I will look it up again next month). They arrived on strange planet because the TARDIS suddenly turned off. The TARDIS had moved to a human body and something else took over the TARDIS.

The Cursed of The Black Spot 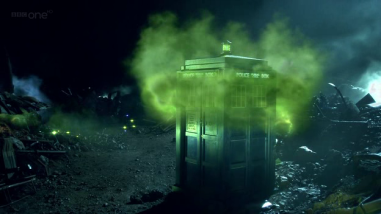 The Rebel Flesh and The Almost People. This time, they landed on an island full of acid. A group of human is mining the acid. Because of the dangerous acid, they created doppelgangers to mine the acid. The gangers were made of material called Flesh. A solar wave storm caused the gangers to rebel against the real human. It even duplicated the Doctor. It turned into a small war of existence between the flesh and the human.

A Good Man Goes To War. I can’t summarize this episode because it would give TOO much spoilers. But I can say that this is the episode where the Doctor used all his acquaintances to help him save someone and this is where the mystery of Professor River Song was finally revealed.

A Good Man Goes To War

Night Terrors. This is another episode with X Files vibes. A little boy was terrible scared with a monster in his room, his fright was strong enough to send a message to the Doctor.

The Girl Who Waited. This is the first time I realized that the Doctor has longer coat now…I honestly think he looks better in his new coat 😉 This episode is the sweetest in the series. It showed how much Amy loved Rory. All this time we had seen how Rory loved Amy so much, it’s nice to finally see Amy’s feeling. Amy was trapped in a different time line and when Rory and the Doctor came to save her, they came decades later and Amy had turned old.

“All those boys chasing me, there was only ever Rory…Rory is the most beautiful man I’ve ever met.”

The Girl Who Waited

The God Complex. Nice to see an intelligent Muslim woman in a western series 🙂 They came to a hotel looked exactly like a human hotel…but something was wrong with the hotel. People were seeing their worst nightmare in certain room. They ran into 4 other people in the hotel, one of them was a female doctor who instantly captured the Doctor’s attention for her smart deduction…I sort of wish she becomes a temporary companion, too bad it didn’t happen. Anyway, creature in the hotel was killing them one by one.

Closing Time. The Doctor has left Amy and Rory and now traveling alone. He stopped at Craig’s house (Greg was the Doctor’s flat mate in series 5). Together with Craig they tried to solve the cause of the missing people in the mall and the unstable electricity because something was stealing the power. The funny part of this episode is when someone thought that the Doctor and Craig were partners with a baby.

The Wedding of River Song. And another episode better left unshared. This episode has strong connection with the first episode of the series. Remember, the Doctor died in the first episode! 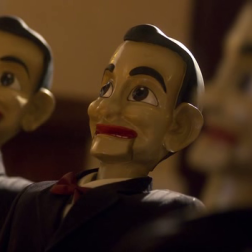 The Wedding of River Song

Series 6 is brilliant!! Enough said! I really love this wonderful come back from the weak series 5. Can’t wait for series 7 to finish so I can start watching it within 3 days 😉

BBC is planning to play the special in theatres across the world!! Unfortunately I suspected the across the world term is not for my country as no TV channel shows Doctor Who 😦

…but, I still keep my hope because if somehow the British Council decides to advertise their greatest TV series to the people of Indonesia who had been blinded for so long, about the existence of this amazing sci-fi series, then maybe there will be at least one theatre playing it…and if so, I will hunt it down no matter what!!

This Doctor Who special is by far my most anticipated viewing of 2013!!! The tenth and Rose are coming back fighting alien alongside the eleventh…how can I NOT be excited?

They have started filming !