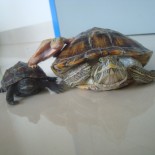 I have seen so many review of this book, many said it was good and few said it wasn’t that good.  I am curious with this book since a couple of years ago but something always distracted me and ended up picking other book from the shelf. Last week, I was in the mood for light reading from thin book and my hand finally picked Kitchen.

Kitchen is a 102 page story about a woman named Mikage Sakurai. She had been living with her grandma since childhood. Her grandma was her only living relative. The story began when her grandma passed away leaving her all alone. In her lonely days, a man younger than her who had once worked with her grandma asked her to live with him and his mother. Yuichi Tanabe and his mother, Eriko, are very nice to her…but she soon found out that Yuichi’s family was not an ordinary family. His mom was actually his father. His father loved his mother so much and when she passed away, she decided she wanted to be a woman and named himself after his wife. Both are very genuine people. She had wonderful time there but when she moved from the house to live independently, bad news reached to her ear. Both Yuichi and Mikage dealt with another lost in their own way.

Not only the story was about dealing with death, I also felt that it was a kind of love story. And you know how I never read romance. This kind of love story was something I didn’t mind at all. It was a love that grew slowly through live, it’s not focusing much on the love affair. The live of Tanabe family was rather bizarre but somehow I can feel how that kind of finally can exist in our community (well, not in Indonesia but it could happen in another part of the world).  I really like the interaction between all three main characters in this story, Mikage, Yuichi and Eriko. Eriko was my favorite characters of all, just reading about her made my heart brighten…I can imagine how it feels to meet someone like her. I know I would make her or him my best friend.

“Yes. But if a person hasn’t ever experienced true despair, she grows old never knowing how to evaluate where she is in life; never understanding what joy really is. I’m grateful for that.”

The second story is called Moonlight Shadow. Moonlight Shadow is so Japanese!! I grew up with stories from the land of the rising sun…I am so used with this kind of supernatural story. This story was written through ONLY 41 pages and somehow it felt longer. I like how it covered pass present and what to expect in the future after the one man you loved the most passed away.

Satsuki lost her high school sweet heart and felt like her world stopped moving. She was in despair and unable to move on. At the same time, Hiiragi, her boyfriend’s little brother, lost his girlfriend. They both died together. Satsuki tried to forget the pain by jogging while Hiiragi by going to school wearing his girlfriend’s sailor uniform. Both were unable to let go of the people the love. But then something happened that made them able to let go their loved ones.

I really like both stories and I know I will read more by this author.

19 comments on “Kitchen by Banana Yoshimoto”