After delaying it for a month, February is so short so I purposely didn’t post anything Boosh related, I am so happy to share the last series of The Mighty Boosh (for now). I am hoping this won’t be the last and that one day the boys will get together again and write another series of The Mighty Boosh or a movie. After Future Sailor Live (I will write my review next month), Julian and Noel decided to have a break…they still love each other and hang out together, they are not working together at the moment. They have been working together for over 10 years, a break is much needed. BUT…I really hope they will end their break soon 😉

Series three is far darker than the previous series. They sort of implemented the dark things they freely explored on their Live Tour which took place before making series 3. The only episode full of fun was only The Power of The Crimp. I can easily imagine how people who had never seen The Boosh would end up confused and wondering which part of this series is considered as comedy…But for me, I already know how unusual the minds of Julian Barratt and Noel Fielding, surprised as I might be it didn’t mean I didn’t enjoy it.

I think have rewatched the whole series four times and the more I watch it the more I love it. It’s totally NOT your usual kind of comedy…however, I have to admit that there are parts where the humour was a miss for me.

In series three, Vince Noir (Noel Fielding) became meaner to Howard Moon (Julian Barratt) but at the same time we also see how close they two of them are. The first series was set in a zoo, the second was in an apartment, the third series still related to second series, it showed them as shopkeepers…the shop belonged to Naboo (Mike Fielding) and the apartment in second series was above the shop. Vince’s fashion was getting more extreme than ever before and Howard’s was getting more boring 😉

Now, let’s move on with the episodes 🙂

The Hitcher made another appearance here 🙂 I really like that green old Cockney geezer. He is evil but a very interesting character. I read in youtube that American had this series as their first The Mighty Boosh…and that fact made some American refers The Hitcher as Eel Man. The Hitcher had less make up now, they only painted Noel green without fake nose and fake chin anymore.

Naboo left the shop to attend Shaman’s Gathering. He was a bit worried leaving his shop but he still had to trust everything to both Vince and Howard. Vince and Howard were testing their salesman’s skill. Vince came up with a machine to find famous celebrity which of course became an instant hit. Howard was desperately trying to sell elbow patches. But the only one came to Howard was a widow named Eleanor who was interested with the graffiti saying ‘Howard Moon will bum you silly for loose change’. Anyway, somewhere along the way The Hitcher came and scared Howard to death.

I really like the eel song sang by The Hitcher, especially the techno version…and of course, it won’t be Boosh song without silly lyrics 😉

Journey to the Center of Punk

This time, Vince turned into a punk (well, he changed so many time, from Mod to Electro to Goth and now a Punk). Vince acted like most Punks did, he even destroyed Howard’s valuable Jazz record. Noel said that he felt sad seeing that scene because it reminded him of school bully.

Howard and his Jazz friend, Lester, tried to fix the record. They found out that Vince ate a part of the record. The record was infected with Jazz spirit and he was killing Vince’s blood cells and aiming to his brain cell. Howard had to save Vince by turning himself into molecular cell and enter Vince’s blood stream.

I really like the part when Howard arrived on Vince’s brain…it was very funny. Love seeing Noel dressed up like Amy Winehouse (see picture below) 😉 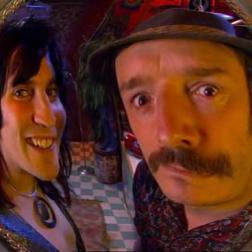 Journey to the Centre of the Punk

The Power of the Crimp

This is my favorite episode in series three…can’t remember how many times I have watched it. It’s so funny and fun.

Vince was looking so gloomy because someone was copying him, it was Lance Dior. Howard kept saying ‘it’s what inside you that count!’ But Howard soon changed his mind when Lance Dior The Flying Zeus: Harold Boon and Lance Dior brought Harold Boon, they called themselves The Flying Zeus. Ever heard of rap battle? Here, they did a Crimp battle!

The dialogue in this series was hilarious. One of my favorite is:

Vince: … he’s almost got my look down. All he needs now is a tall Northern Jazzy freak with a mustache and no dress sense.
Howard: I already got a shallow mate who dresses like a futuristic prostitute.

What’s interesting about this episode is the cameo, it was the famous Gary Numan. Both Julian and Noel are huge fans of Gary Numan.

The best Crimp in the whole series!

The Strange Tale of the Crack Fox

To be honest, this one was NOT funny at all…but it’s a very interesting story, some even considered it as their favorite series. I think this one is classified as Dark Comedy.

Vince was quite cruel here. He was too lazy to put the garbage into the designated refuge area, he simply put them on the back yard. Howard told him to clean all the garbage and put it into the DRA. When Vince was about to moved all the garbage, an urban fox had turned the mountain of garbage into his home. The fox was not ordinary fox, he was a crack fox…or an addict fox. The fox rob the store by taking a powerful shaman juice. Vince told Naboo that Howard was the one who put the garbage there and Naboo fired Howard.

This episode was inspired by their old environment. There were a lot of crack addict around their flat. They sort of make a joke out of drug addict here.

The Power of the Crimp

The Strange Tale of the Crack Fox

Party is also my favorite in the series…it was so funny…AND we got to see Julian and Noel making out on the roof 😉 a great teaser for all Noelian!

Vince arranged a party by using Howard’s Birthday as an excuse. Howard didn’t want to do a party, Vince tricked him by hiring a girl to ask Howard (played by Diva Zappa, the daughter of the legendary Frank Zappa). Anyway…a bit of spoiler here, Vince tried to convince the head shaman that he didn’t have an affair with his wife because he was in love with Howard…to prove it, he had to kiss Howard…gyaaaaaaaa what a sweet moment!! (Noel said, Paul King – the director- asked them to repeat the scene over and over again)

Although…there was a part where the comic was lost on me!! (spoiler) I just don’t find Harrison bumming Lester head as funny.

Party has one of the most can’t-get-it-out-of-my-head Crimps: (you can hear it HERE)

Richard Ayoade help The Boosh writing this episode. There were basically two stories here. Vince tried to be the vocalist of a band who only accepted people with very thin legs. Vince tried to make his legs as thin as possible…while Howard was trying hard to deal with his chokes every time he tried to act in front of people.

They used puppeteer for this episode. 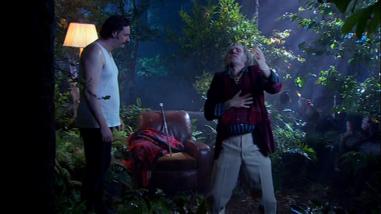 One of my favorites Noel’s characters…Amy Fieldmouse!! Look at how pretty he is!!

I enjoy the Extra parts of the DVD. They showed us the Boosh songs from Series 3 (as always), deleted scenes, Boosh Publicity, Mint Royale Promo, Out-takes and trailer.

In the making of Boosh 3, when they finished shooting the last scene…aaawww look at how sweet they are!! I really love the love between them.