To live contently doesn’t mean you have to live with a lot of money.

Twilight Samurai is the humblest samurai movie I have ever seen. When I decided to watch this movie, I simply want to watch it because of Hiroyuki Sanada (I can proudly said he is one of my most favorite Japanese Actors even though I haven’t seen all his movies). I have heard that Twilight Samurai is a good movie but I never really searched to find how good it was. Right after I finished watching it, I looked for it in imdb.com and I wasn’t surprised to know that Twilight Samurai had won many awards and nominated for Best Foreign Language Film at Academy Award 2004. You can see all the awards here.

Why did I say I wasn’t surprised? Because Twilight Samurai is indeed really really good. It’s so original and so different to most samurai movies that ever come across my attention. TS has a lot of heart in its story. If you are expecting a lot of sword fighting scenes in TS, you will end up disappointed but if you are looking for a warm story that shows what most samurai were on Tokugawa era…then you will find the movie satisfying.

The story was narrated by Ito, the youngest daughter of Iguchi’s family:

With a sick wife, two young daughters and an aged mother in his care, my father was unable to drink with his colleagues. He had to hurry home every evening at dusk. I was told the men he worked with gave him the cruel nickname of ‘Twilight Seibei’.

Iguchi Seibei (Hiroyuki Sanada) was a low ranking samurai. He was more like an accountant than a soldier. When his wife died he was forced to hold a grand funeral because her family came from a wealthier family. The widower had to raise his two daughters and took care of his senile mother all by himself…but he never complained because he loved his family with all his heart.

…watching my daughters as they grow day by day is…how shall I put it? It’s like watching crops ripen or flowers grow in a field. I enjoy it very much.

His simple life was about to change when the woman from his childhood came to his house. He had been in love with her since childhood but he kept it to himself. Tomoe was married to a drunk retainer. When Tomoe’s former husband challenged her brother (her brother was the one who help with the divorce), Senbei stepped up to the challenge. Seibei and Tomoe’s brother were good friends. He defeated the man by using wooden sword.

The fight made his co-workers looked at him in different way, they used to mock him behind his back. But the fight also forced him to follow the code of samurai. He had to obey the leader of his clan to kill Zenemon Yogo. 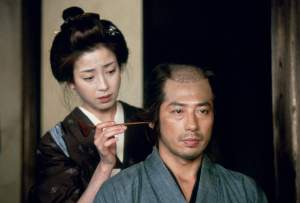 Apart from that code of samurai story, we got to see how love bloomed between Tomoe and Seibei.

What made TS interesting was the way the story evolved in a natural way, the movie was 2 hours but it didn’t feel that long at all. It flowed smoothly. TS also showed the other side of low ranking samurai. They worked like white collar people, not all samurai ended up as fighter. Although I have seen/read about the honor of sword fighting between two samurais, it was still interesting to see how they honored their opponent. When Seibei was about to fight Yogo, he prepared not only his sword but also his way of dressing. And when they fight, they didn’t do it with full hatred but with honor toward each other.

Samurai era always fascinate me. Many told me that they like period movies…I don’t share their enthusiasm when it comes to Western period (when I watched Western period movies, it was pure because of the story or the cast) … my favorite period movie has always been SAMURAI period. Their culture never stopped making me amazed.

I also enjoyed the language…the way they speak sounded so different with nowadays Japanese. I could hardly understand them…it was a good way to practice my listening 😉

My father had no desire to rise in the world and I don’t think he considered himself unlucky. He loved his daughters and the beautiful Tomoe loved him. His life, I think was short but full. I am proud to have had such father.

If you haven’t watched The Twilight Samurai…DO WATCH IT!!

Note: If you never seen Hiroyuki Sanada before, he played in Sunshine with Cillian Murphy (one of many reasons why I love Sunshine, it has 2 favorite actors of mine), The Last Samurai (he was the reason why I watched that movie), and Rush Hour 3. He will be in 47 Ronin (again with my other favorite actor, Keanu) and The Wolverine (It will be my first time watching x-men related movie in cinema…just for Hiroyuki-sama).

This is my first Double Review with Jason @ Genkina Hito’s Blog. Jason has a great way of reviewing, unlike my way his way is very thorough. He has written more on the storyline and also highlighted the way Yamada directed the movie.  I am happy to know that he also loved the movie even though it is a full action samurai movie. What makes him likes the movie is same with me:

“It is a very well made film which tells a simple but rich and gripping story. Its power is down to the acting and the effective way the story unfolds through the script and direction.”

Do stop by at his blog and read his review to get a better perspective of the movie. 🙂

It’s been nice doing this review with you, Jason. Maybe next time we can do it again 🙂