I have finished watching 3 TV series in the past 2 months. There are reasons behind why I choose to watch each series. And the reasons are very different…but two of them are because of the people involved in it while the other one is because it’s a very well-known series and I am a bit curious.

These three comedies come from 3 different countries (as I have mentioned in the title of this post). I am quite proud with my viewing diversity … I don’t limit myself in one particular country, even though I have tendency to watch more from 2 countries, Japan and England, but I keep my eyes open for other countries.

Let’s just talk about each of them individually 🙂 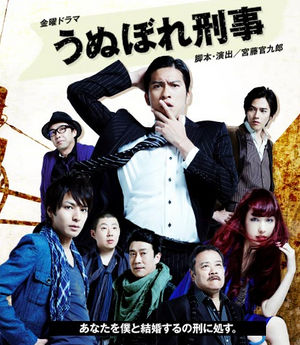 Unubore Deka is the latest Dorama by Tomaya Nagase and I really like his dorama because they are always very funny. Unfortunately, Unubore Deka is not as funny as his previous doramas…the idea is actually funny and might work as a miniseries with 3 episodes. Maintaining the same pattern for 11 episodes is the reason why this dorama turns from funny to boring.

A 30-year-old single detective (Nagase Tomoya), who is under the illusion that he is popular with females is called ‘Unubore’ by friends. He is an ultra romantic and susceptible to conceitedness. He has such a strong desire to marry to the extent that he has bought an apartment for his newlywed life. He falls in love with female criminals at first sight each time. While the sheer desire to meet wraps around him, he will get proof that the female is the culprit. And so, he will thrust both the arrest warrant and marriage papers at her, proposing with the words, “If you marry me, I won’t arrest you.” If that still does not work, he will hold out an engagement ring and his handcuffs. In the end, the criminal will choose to be arrested and his heart will be broken. He will cry as he puts the handcuffs on her…

He kept repeating the same thing over and over again…falling for the culprit and willing to let her go if she chose to marry him. It was really funny…at first! But repetition is really a BIG NO NO in a series. I got tired after few episodes.

I usually finished my dorama in less than 3 days…but it took almost a month to finish Unubore Deka because its similar story on each episode. 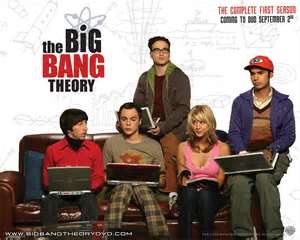 The Big Bang Theory – From US

I have heard so much about this Sitcom…so much that it made me curious. A friend told me that my favorite series, Sherlock reminds her of Sheldon in TBBT. My curiosity got the better of me and I borrowed the series from my friend.

The show is centered on five characters: roommates Leonard Hofstadter and Sheldon Cooper, two physicists employed at the California Institute of Technology (Caltech); Penny, a waitress and aspiring actress who lives across the hall; and Leonard and Sheldon’s equally geeky and socially awkward friends and co-workers, aerospace engineer Howard Wolowitz and astrophysicist Rajesh Koothrappali. The geekiness and intellect of the four guys is contrasted for comic effect with Penny’s social skills and common sense.

The Big Bang Theory (TBBT) is a fun series but not as hilarious as I thought…maybe it’s because I have seen another more hilarious smart people sitcom, which is The IT Crowd. Some of the jokes in TBBT are a bit dry for me. Often I found myself not smiling at all throughout one episode. And somehow, the idea of very smart people attracted to a sexy no brain woman is too old and cliché for me. Nothing new there. But, I admit that Sheldon is a very intriguing character, his way to annoy people is very fun to watch. I think Sheldon is the only character that kept me watching the whole first season.

Will I continue to second season? I think not! It was fun but not that appealing for me. 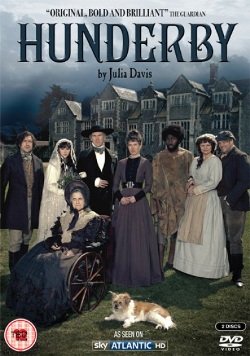 I am going to really honest here! The reason why I knew about Hunderby and then watched is because of Julia Davis! I have never seen her before but she is Julian Barratt’s life partner. They have a twin together but as far as I know they aren’t married yet. Julian Barratt is one half of The Mighty Boosh (Noel Fielding’s comedy partner).

A black comedy set in the 1830s, which focuses on Helene, a shipwreck survivor washed ashore near a small English village. There, she is swept off her feet by widowed pastor Edmund and the two soon marry, the puritanical Edmund believing his bride to be untouched by another man. But she has a history, a dark past that she cannot escape. As Helene moves into Edmund’s home, she falls under the watchful eye of housekeeper Dorothy (played by Julia Davis) who is more than a little involved in her master’s life, and quite obsessed with his dead first wife, Arabelle – to whom Helene simply does not compare. While Helene battles to keep her past a secret, she must navigate Dorothy’s devious scheming, her husband’s harsh critique and a potential new love interest.

Hunderby is NOT HILARIOUS AT ALL! It has its smiley parts (I smiled in some parts but didn’t laugh at all). Compared to the other 2 series above, Hunderby is the least funny of all…maybe because it’s a Dark Comedy. However, I am not going to say that it’s a bad series…it’s actually really good and quite addictive. I finished all 7 episodes in one day. The story is really intriguing, only by watching one episode already made me curious with what will happen to everyone in Hunderby. All the characters were complex and none of them were 100% good or evil. Watching the whole series was like watching a long period drama. I think the funniest episode is the last episode, where every secret finally unraveled.

Julian Barratt sure knows how to pick a girl 😉 Julia Davis is amazing!! Her acting really amazed me, I hate her character so much but her character is also the one I miss when she wasn’t around. Not only she was brilliant as Dorothy, she was also the writer of the show (together with other Mighty Boosh’s guest star, Barunka O’ Shaughneesy). The rest of the casts are also amazing.

The Guardian said: “isn’t quite like anything else on television… original, bold and brilliant”
The Times said:  “intelligent and beautifully made”.

Those are 3 TV series I watched lately. Have you seen any of them? What do you think? Do you have TV Series you can recommend to me?

27 thoughts on “3 Comedies From 3 Countries: Unubore Deka, The Big Bang Theory and Hunderby”