2012 has been both the saddest and the best year of my life.

Early 2012 was very tough for me. My mom, who was my best friend, had died two weeks before 2012 started and I began year 2012 without her. It was very hard to imagine living without her. To make matter even worst, 3 months after her death, my favorite turtle, Kame, decided to leave me too. I was at my lowest state of mind at that time. Loosing two loved ones in such short time broke me to pieces.

Fortunately, things got better as the year moved on.

I found new lovely turtles…I adopted my little Papoe as a way to get over the grief of losing Kame. And then months later, I feel in love with a cute black turtle and decided to adopt him and named him Kurome. I now have 3 adorable turtles with different personalities. You can see their photos in the end of this post

Year 2012 is the year where I believe in that famous sentence: Dreams Do Come True! The band I have loved for the past 11 years (will be 12 years in 2013) and I was so sure I will never see them Live due to financial issue (I couldn’t afford to go to Japan to see them) finally came to Indonesia! L’Arc~en~Ciel (in short: Laruku) came to Jakarta on May 2, 2012. For me, out of ALL bands ever existed on this planet…Laruku’s concert is the one I want to see the most…they are the best band in the universe!

I saw them less than 2 meters in front of me. They read my banner saying “juichi nen kan matteiru, Jakaruta ni kite kurete hontou ni domou arigatou” (I have been waiting for you for 11 years, thank you so much for coming to Jakarta)

It was the best night of my life!! Even till this day, I can see the concert materialize in front of me whenever I listen to their songs.

All the post about that unforgettable night is written under the tag LarukuJKT> here
Live Report in English and Indonesian.

Meanwhile, in my blogging life.

I had wonderful night meeting one of my blogger friends from far away land, Ruth of Flixchatter, and Andina of Inspired Ground and Cecilia.

And I have the BEST post ever shared in my blog, an interview with real-life author whose book has been made into movie starring my dearest Cillian Murphy. My interview with Daniel Clay, the author of Broken, has been the highlight of my entire blogging life 🙂 here’s a snippet of the in interview:

The feeling I remember most was a huge adrenaline-rush that just couldn’t seem to go anywhere – it’s weird, because you know in the back of your mind that the first offers are just small steps on a very long road and there are still all sorts of things that could go wrong before you have your book on the shelf or the film of it in the cinemas, but it was still a fantastic feeling each time it happened. Definitely two of the best phone calls I’ve ever had!

Not only he kindly let me do a Q&A with him, he also sent me his book which I finally received 2 days ago 🙂 (click on the image to see it larger) 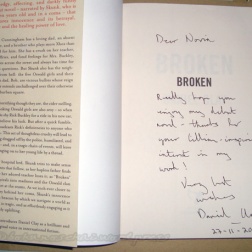 Once again…thank you soooo much Daniel ((hug))

Those are the saddest and the best days of my life. It’s funny how both happened in the same year.

Apart from that, I found new all time favorite TV Series 🙂 I found Doctor Who and The Mighty Boosh. I love both of them but I love The Mighty Boosh more than Doctor Who. I adore the surrealistic and the craziness of the Boosh. I am planning to collect all their DVDs. For now, I have just bought their special edition box set (thank you Ruth for bringing it all the way from US). I will buy their Live DVDs and The Mighty Book of Boosh later.

Well, I don’t have much…all I really want for 2013 is a new job. I worked in two places now, one is in Pharmaceutical Vocational School and I love working there because I am teaching the school subject I am most passionate, the other one is in this course with terrible management system…I really want to leave the later. I am now constantly looking for a new job…wish me luck 🙂

My other resolution is just to enjoy life 🙂

A warm hug for everyone who has been with me through my worst and best days…Thank you.

Last but not least, A HUGE thank you to these five wonderful ladies who always find time to read and comment on my blog.