Whooaaa…Can’t believe it has already been two years!! 2 years without failing even one month to write about the gorgeous Irishman named Cillian Murphy \(^_^)/

As a celebration for its 2nd year, I have made a new Monthly Murphy badge 🙂

On the old one, I only highlighted his wonderful blue eyes…now, I use his whole profile. The image is taken from Sunshine, the movie where he looks the gorgeous of all.

Although there are only 12 months in a year but I have written 19 posts within that year…the reason is because of His birthday in May where I wrote more than 1 post and when both Retreat and the awful In Time are released almost at the same time.

The first thing I wrote in November 2011 was about Retreat and In Time. I have predicted that Retreat would be awesome while In Time would be awful…the prediction was 100% right!! Because of the two movies, on November 2011 I wrote my review of Retreat with its great ending and of In Time with its awful story (I wouldn’t have watched it if Cillian is not in it). I also wrote how Retreat easily won over In Time.

On December 2011, I shared his interview in Dazed and Confused. On January 2012, I did a bit of listing over his movies…you know which one I have and haven’t watched, it’s about his Filmography. On February2012, I did a serious post on A Look Into Ireland Through Cillian’s Movie. I really like that post, one of my favorite posts on movie review.

On March 2012, Cillian had his first award for his stunning one man performance in a theatrical play called Misterman. I am very proud of him…let the world see your real talent!!!

Off to April 2012…I shared his only film (a short film) where he used his native language, it was titled Filleann and Feall. I also helped sharing information about making a book full of message from fans which would be given directly to Cillian. Here’s my page: 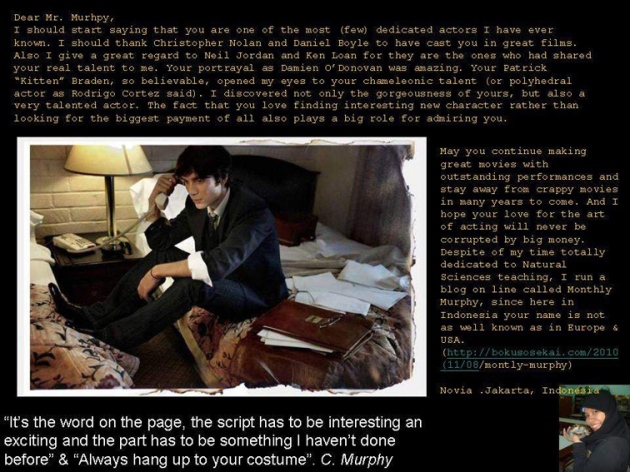 May is always a special month…the month where this talented man was born. I shared bits of his news, made a short story of his dream, shared 13 photos of him that I really like, and closed it with Birthday wish. Making a short story of how his dream might look like is a post I most proud of!

Here’s an excerpt of it:

Cillian Murphy found himself lost in a dark place, so dark he couldn’t even see his hand when he waved it in front of his eyes. He rotated his body trying to find a bit of light to guide him. He saw one tiny dot of light the size of a needle far to his left. Murphy thought that it was better than nothing. He walked toward the light. It felt so far.

Without him able to explain it, he was suddenly out of the dark and was surrounded by blinding light. He blinked once and twice to adjust his eyes. His light blue eyes finally able to perceive the image that spread before his eyes. He saw a vast field with no one to be seen. He was completely alone.

I had 2 polls which were published on July and August 2012. Which character with eye glasses do you like and Which antagonist character do you like most? The two posts were a huge success…many had voted and commented. I shall do another poll next year 😉

On September 2012, I was madly in love with Doctor Who and decided to do some Photoshopping of Cillian near the TARDIS as if he is the 12th Doctor 😉 I also reviewed his latest movie, Red Lights.

The last post on Monthly Murphy, October 2012, was about his interview on PORT. I quoted parts of the interview I found interesting.

Looking forward to another year full of Cillian 🙂