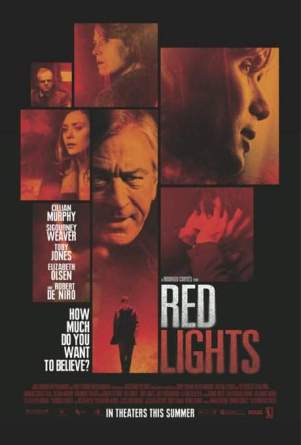 There are two kinds of people out there with a special gift. The one who really think they have some kind of power. And the other guys, who think we can’t figure them out. They’re both wrong.

As I always said in many post here, despite the fact that I love Cillian Murphy more than any actors on earth…but his movies are not always to my liking. Fortunately, he still acts brilliantly in those movies I don’t really like.

Opening a review by saying that not all his movies are to my liking kinda give you an impression that I don’t like Red Lights, right? Well…for me, Red Light is a good movie but the story not strong enough. The twist is also not gripping enough. Compared to Cillian’s previous independent psychological thriller, Retreat, Red Lights still needs a lot of things to be upgraded…especially in the writing department. Despite it all, I still have higher respect toward Cillian’s independent movies than his failed blockbuster movies.

At the beginning, Red Lights focused more on Margaret Matheson (Sigourney Weaver) who had spent 30 years of her life trying to prove that supernatural and psychic power never exist. She was helped by a young physicist named Tom Buckley (Cillian Murphy). Buckley could have better career but for some reasons he decided to be with Margaret. Margaret, assisted by Tom, taught in a university which happened to have another contradictive department, they tried to prove that psychic power does exist.

We got to see how Margaret and Tom revealed the fraud claiming psychic at the beginning of the movie. Things got serious when Simon Silver (Robert De Niro), a blind psychic who had retired for long, decided to come back to society and shared his power to those who needed his power. Tom was obsessed with Silver and wanted to investigate him. Margaret opposed him by saying she had done that before and told him that Silver is dangerous. Tom insisted and did his own investigation. He found Margaret struggling with heart attack when he got back from his investigation. Her death made him even more obsessed with Silver.

I can’t say more than that because it would be a MAJOR spoiler.

In the first half, we got to see more of Sigourney and De Niro, Cillian was somewhat overshadowed by them (I don’t mind at all because I love those two old actor/actress…especially Sigourney who had remained as one of my favorite actresses for years). Cillian stepped up to the spotlight when he started being obsessed with Silver. Funny thing is (I don’t know how many people realized this…maybe even Cortés didn’t realize it as he didn’t take another shot of that scene), Cillian lost his American accent and used his own accent for just a bit when he was shouting at Sigourney. Somehow, I found that amusing. Does anyone else who had seen it noticed that?

I have read that Elizabeth Olsen was great in Martha Marcy May (I need to see this one day) but she was just okay in Red Lights. The problem didn’t lie on her, it’s more on the fact that her character is not challenging enough. She played one of Margaret’s students who fell in love and dated Tom Buckley despite their age gap.

Out of all 5 center characters, Cillian Murphy, Sigourney Weaver, Robert De Niro, Toby Jones and Elizabeth Olsen…I mostly enjoy Cillian and Sigourney’s performance. I like the pairing of those two. I also like Toby Jones’s performance.

Story wise, as I have said above, it needs more strength. Something I can’t quite explain made the story so weak. The main idea is interesting, I would still see the movie even if the actor is not Cillian because I like this kind of movie, but it need something to make it more gripping. I can’t point out which specific part is wrong or weak, simply said it’s not something I will remember years afterward. Cortés was trying to create an ending that would awe people with its twist…but to be honest, it didn’t awe me at all. I was left feeling “oh…so that’s it?” When I watched Retreat, the ending awed me and made me stunned for few minute trying to cope with the fact it came so unexpected…Red Lights failed to deliver such awe to me. But…overall, I still like it.

“When you come across something that is original and interesting, you’ve got to go after it,” he said, “When you look at the script, if you think you can do it, then it’s not worth it. If it is something ‘(Expletive), this is going to be hard. Am I right for this? Should I? That’s the one you should jump at”

I have a feeling that Cillian and Cortés will work together again in the future as the two looks so close together. 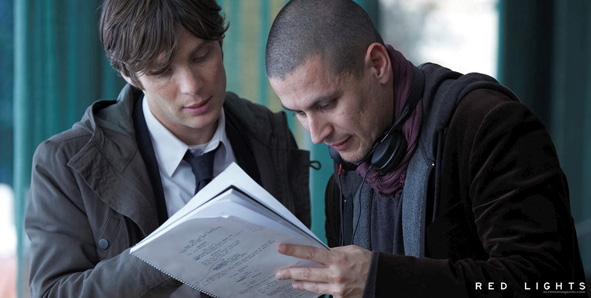 Red Lights has the elements of Mystery, Suspense, Thriller and Supernatural, therefore I shared this review as part of my Peril on the Screen, R.I.P VII Challenge. Review Site is here.

More of Cillian Murphy’s posts can be found in Monthly Murphy.