He’s like fire and ice and rage. He’s like the night and the storm in the heart of the sun. He’s ancient and forever. He burns at the centre of time and can see the turn of the universe.

Ow help me God…I am so addicted to Doctor Who!! I only have 2 more series, series 3 and series 4. I was planning to slow it down and maybe watch other series and movies first before finally being glued to my TV set with the next series of Doctor Who.

Series 3 is preceded with a Christmas Special where the Doctor met Donna Noble, I thought she was going to be the next companion…but she refused him. I will talk more about this Christmas special next time because Donna is coming back in series 4 and she is my favorite companion so far 🙂 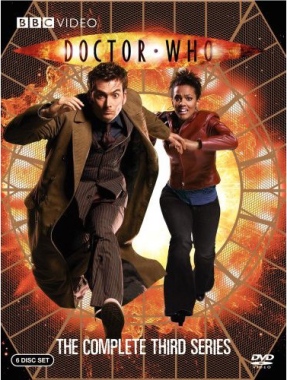 The Doctor (still played by the adorable David Tennant) met his new companion Martha Jones (Freema Agyeman) in the first episode called Smith and Jones. The Doctor disguised as a patient named John Smith. Martha was an intern. The hospital was lifted up to the moon by The Judoon (sort of like space police in rhinoceros shape). The Judoons were looking for Plasmovore. The Doctor kissed Martha as a way to lead The Judoons to Plasmavore.

Now…let’s talk a bit about Martha. When I saw her as an intern I thought “oh good, this is nice. A smarter companion, smarter than Rose. She might do better with the Doctor” …unfortunately, my hopes on Martha shattered to dust 😦 She was indeed smart but she fancied the Doctor TOO damn much and it was kinda annoying to see it. She was like begging for the Doctor to like her back even though He had clearly mentioned her that she will never replace Rose. Rose was also in love with the Doctor but she was not craving so much for him like a sick cat. It’s annoying every time Martha said “he didn’t even look at me”. Glad she was replaced by Donna in series 4.

In The Shakespeare Code, The Doctor and Martha went to the past and met Shakespeare. He was a real genius. He could figure out who the Doctor is. The Carrionites were using Shakespeare words to bring their people into earth. In Gridlock, The Doctor took Martha to the time after New Earth (episode 1 series 2). There, he met The Face of Boe who was dying. He told him that the Doctor is not alone.

Daleks in Manhattan and Evolution of the Daleks … Doctor Who without Daleks is incomplete 😉 …this time, the four Daleks from series 2 escaped to Manhattan when empire state building was still being built. They were using the construction to make a new breed of human. Daleks Sec had done a new evolution by becoming a human Daleks, but that evolution changed his personality as the Daleks.

I spotted someone I know from Sherlock in The Lazarus Experiment…it was Mycroft 😉 Mark Gatiss was playing as Doctor Lazarus who tried to defy aging. His experiment went wrong. In this episode, we heard the name Saxon for the first time. He would play big part in the whole series.  42 was about trying to safe a spaceship from crushing to the sun. The impact was 42 minutes to go.

Human Nature and The Family of Blood is one of my favorite episodes here…The Doctor had to turned himself into human to escape from some aliens who wanted to make themselves immortal. The Doctor altered his gene and erased all his memory as the Time Lord, he became a teacher named John Smith. The problem was no only with aliens, he fell in love with a woman and was thinking of never to change back to be The Doctor.

Steven Moffat always wrote the most interesting and twisted story in Doctor Who. Blink was the most exciting episode in series 3. I love how intelligent the story is. It was about Weeping Angels which could send people to the past…that include the Doctor. He needed help from someone in the future, he needed help from Sally Sparrow. 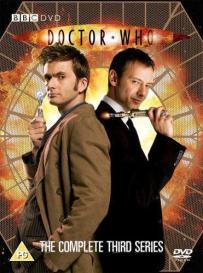 This series was closed with three connected episodes (Utopia, The Sound of Drums and Last of the Time Lords) dealing with Saxon a.k.a The Masters, another Time Lord whom Face of Boe had mentioned in episode 3. I am soooo happy to see Captain Jack Harkness (John Barrowman) again. He is one of my favorite companions…I wish he could travel with The Doctor longer. His character is very interesting. Back in series 1, Rose brought him back from the dead and the ninth Doctor left him in Satellite 5. I was wondering (back then) why he left him…it turned out, the Doctor knew that the Captain had turned into an immortal and sort of distrusting him. Fortunately Jack hadn’t changed to evil man despite the fact he could live forever.

The Doctor, the Captain and Martha faced another Time Lords who liked to be called as The Master. He stole the TARDIS and deceived people to vote for him as UK’s Prime Minister. He used that position to bring his “children” to invade earth. They had to spent one year to finally defeated the Master. To be honest, the aging tenth Doctor is kinda cute 😉

This series is darker than the previous series, in my opinion. The stories are better built and more complicated. in conclusion, story-wise I like this third series more than the second on but as for companion, I like Rose more than Martha.

“People assume that time is a strict progression of cause to effect, but actually from a non-linear, non-subjective viewpoint – it’s more like a big ball of wibbly wobbly… timey wimey… stuff”

Next Doctor Who reviews:

PS. Don’t be surprised to see another review of Doctor Who within short time because I had just finished Series 4 😉