As I have said before in my review of Doctor Who 2005, I can’t wait to see the 2006 series with the cute Tenth Doctor, David Tennant 🙂

The 2006 series started with New Earth where the doctor took Rose Tyler (Rose remains as his companion after his incarnation) to the new planet earth billion years away from now, the old earth exploded in the 2005 series. In this episode, the doctor and Rose arrived at a hospital ran by cat-like nuns. Rose was possessed by Cassandra, the last human at that time. The nuns were doing experiments with some sort of human clones.

In the second episode, Tooth and Claw, they went to the past when Queen Victoria was still the queen of England. We got to hear David Tennant’s Scottish accent in this episode. The Queen along with Rose and The doctor stayed on Torchwood Estate which belonged to Sir Robert. In that place, they were attacked by werewolf. The Queen then established Torchwood Institute as a way to help England fight the non-human enemy. 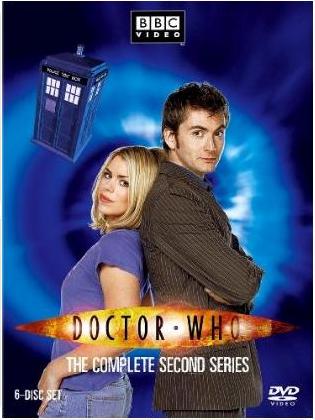 In School Reunion, we (the new fans of Doctor Who) were introduced to Sarah Jane Smith. She was the companion of the third and fourth doctor. They were investigating something in a school. Rose realized she was a bit jealous with Sarah Jane Smith. Sarah refused to join the doctor again but Rose’s boyfriend, Mickey Smith volunteered to come along.

The Girl in The Fire Place was one of the most complicated stories in the 2006 series. They were in a spaceship with many gates to the life of Madam Pompadour.

Rise of The Cybermen and The Age of Steel were 2 episodes with one story. Something went wrong with The Tardis (the doctor’s spaceship) and causing them to land on a parallel world, almost exactly the same with Rose and Mickey’s world. The main different was the existence of many zeppelin on the sky. They came in the right time when a billionaire trying to built an army of Cybermen. In these two episodes, we got to see the conflict between Mickey, Rose and the doctor. Mickey felt like stranger amongst Rose and The doctor.

The Idiot’s Lantern was about a creature inside TV set who sucked faces and soul energy of people who were watching TV at that time.

The next episodes were very useful, The Impossible Planet told the story of a buch of scientist trying to figure out why a small planet wasn’t sucked by a black hole nearby, the planet was orbiting around the black hole. They dug into the core of the planet and discovered The Satan Pit. The doctor refused to acknowledge the existence of Satan despite the fact he had seen and fought him.

Love and Monsters can be considered as an intermezzo episode. It was focusing on a man with a group of people trying to figure out about the doctor, Tardis and his companion. The group’s peace was disturbed by a bossy newcomer.

I had great laugh seeing how a 2006 TVSeries trying to portrayed the 2012 Olympic…which had just finished recently. It was a laugh because it didn’t look like the current Olympic at all 😉 Fear Her was focusing on an alien called Isolus, the kind that went traveling with billions siblings. The Isolus possessed a little girl and tried to keep as many people as possible inside her drawing.

Army of Ghost and Doomsday were another two episodes with one story. It took us back to the Torchwood Institute. They found a void that could project ghost and a golden sphere. The doctor warned them not to mess with it. The ghost was actually Cybermen from the parallel world which tried to get into this world. Everything went wrong as the experiment not only brought Cybermen but also the Daleks.
Spoiler: The Doomsday was the day the doctor was forced to separate with Rose Tyler.

It wasn’t a big surprised when Rose said she loves the doctor because the tenth doctor is indeed loveable. He can be a bit cruel and heartless but he is fun and chatty. His quirkiness is in fact his string appeal.

I really really really like Doctor Who, where has this series been my whole life?? I was paying too much attention toward US TVSeries and ignored the British ones, I regrets that decision a lot. Doctor Who is the second best sci-fi TV series I have ever encountered in my whole life…I should have watched this series a long time ago. I want to watch it from the beginning (the 1963 Doctor Who series) but it might be a bit difficult to find it 😦 … well, at least I can enjoy the series from 2005 till 2012 (hopely).

I have the 2007 and 2008 series in my collection, but I am going to control myself not to watch them straight away. I am going to calm myself and watch another series or movies before finally watching the 2007 series.

Have you ever watched Doctor Who? If you like sci-fi like I do, you should definitely watch it 😉