Some of you might never hear of this trilogy or should I say the upcoming trilogy is. The trilogy is going to be completed in 2013. The first time I heard about this trilogy was when I watched the first movie, at that time I was told that the last in the trilogy called The World’s End is going to be released in 2012, kinda related to the prophecy which said that the world will come to an end in 2012. Then, for reasons I didn’t know, The World’s End was postponed to 2013.

Ups…I talk too far ahead, I should have told you first about the trilogy 😉

The Blood and Ice Cream Trilogy (I found out its other name from wikipedia, it is The Three Flavoured Cornetto Trilogy…but I am used with the former one so I will keep using that one instead of the later) is not like other trilogy ever produced in movie industry. None of the movie in the trilogy is connected to each other, the only thing connected each other are the presence of blood, Cornetto and the amazing hilarious trio from England, Simon Pegg, Nick Frost and Edgar Wright.

Pegg, Frost and Wright…have you got the clues already? 😉 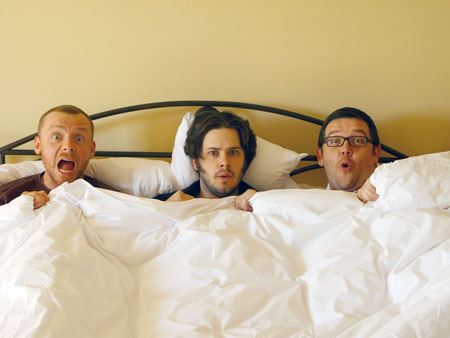 Why Blood and Ice Cream?

Have you seen Shaun and Hot Fuzz? Both movies showed a lot of gore, though Hot Fuzz didn’t contain as much gore as Shaun. We will be expecting blood to spill in the upcoming The World’s end 😉

In both movies, Nick Frost’s characters always eat Cornetto ice cream with different flavor. In Shaun of The Dead, it was red strawberry flavoured Cornetto to show how gory the movie was. In Hot fuzz, it was blue original Cornetto to show the element of police. In the world’s End, it will be green mint choc-chip flavour to show sci-fi elements. However, based on Screen-Rant.com, Wright said:

[It’s true that Mint Chocolate Chip ice cream will appear in the movie] but I said that basically to have some kind of answer when people would ask me about it. […] There are only three flavors of Cornetto. So if we do it again, there is no other option.

Let’s look back at the previous two movies before we look at the last movie in the trilogy (although we never know that it will be the last, they can always turn it into more than a trilogy 😉 )

I have never written a proper review (meaning 1 post per movie) for Shaun of The Dead and Hot Fuzz…but both movies were mentioned so many times in my blog.

Shaun Of the Dead

The story was about Shaun and his friends who were trying to survive from the Zombies. Shaun and his best friend, eddy, tried to find the best place to hide till the zombie situation is finally over. They tried to take his mother and step father, and his ex-girlfriend along with her friends to a place that they thought very save, the place was their favorite pub.

Sounds simple and not interesting, doesn’t it?

In truth, it’s not that simple and very interesting. It was freaking hilarious and scary at the same time. Even simple things like finding a weapon to kill the zombies were funny.

Quoted from my Shaun of The Dead Vs Zombieland post. 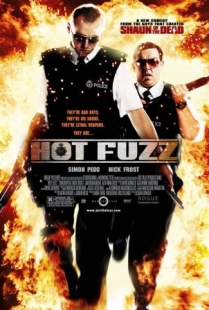 The story is about a dedicated police officer named Nicholas Angel. He is transferred to a small village by the name of Sandford. Sandford is a peaceful country with almost no crime. Nicholas soon realizes that there are so many deaths and everyone keeps on saying that all of those deaths are just accident. Nicholas meets an unusual constable, Danny Butterman. Their relationship becomes stronger day by day. Nick and Danny find out that there’s a conspiracy going on in Sandford. Both of them, along with the other officers, work together to put a stop on it. 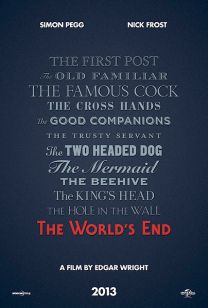 Based on imdb.com, the story will be:

20 years after attempting an epic pub crawl, five childhood friends reunite when one of them becomes hell bent on trying the drinking marathon again. They are convinced to stage an encore by mate Gary King, a 40-year old man trapped at the cigarette end of his teens, who drags his reluctant pals to their home town and once again attempts to reach the fabled pub, The World’s End. As they attempt to reconcile the past and present, they realize the real struggle is for the future, not just theirs but humankind’s. Reaching The World’s End is the least of their worries.

I have seen Shaun of The Dead countless time but it still hasn’t made me bored yet. I have only seen Hot Fuss three times and each time I see it, I like it more than before…but still Shaun is by far my favorite out of two movie. Looking forward to seeing The World’s End 🙂

After feeling a bit disappointed with Paul (Pegg wrote it without Wright ), I really hope that The World’s End will pay off the disappointment. I love seeing Simon Pegg and Nick Frost playing together.

The World’s End will be released in 9 August 2013 (UK) and will start shooting this fall.

My one and only hope now is that it will be played in my country’s cinema (sad but true, the cinema rarely played British movie 😦 )

Are you as excited as I am toward the final movie in this trilogy? 🙂