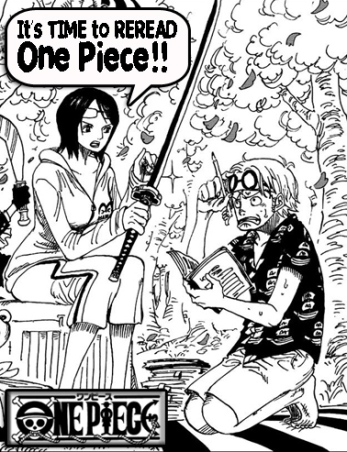 I never have a set date for rereading One Piece, it just happen when I suddenly feel that ALL the un-read books on my shelf are boring. The minute I finished 20th Century Ghost by Joe Hill (review coming up soon) all I want is only reading my ALL TIME FAVORITE MANGA, One Piece by the great Oda Eiichiro.

One Piece is currently ranked as the best-selling series of all time in manga history. It enjoys a very high readership, with more than 260 million volumes of the series sold by 2011 in Japan. One Piece has received wide critical acclaim from reviewers, primarily for its art, characterization, humor and story.

I tried not to write the same EXACT thing for each my annual reread event….but I would love to share my previous announcement for this event.

It has been 15 years ago since the first Volume of this amazing Manga was released. In Japan, it has reached volume 68, but here in Indonesia it’s only till volume 61 (Volume 62 was released recently, I’ll be visiting book shop soon)

You can see on both cover, their similarity is striking. At first, there were only Luffy (The Captain), Zoro (The Swordman) and Nami (The Navigator)…but now, they had 8 crews (Including Luffy), Usopp (The Snipper), Sanji (The Cook), Chopper (The Doctor), Robin (The Archaeologist), Franky (The Carpenter), and Brooke (The Musician).

One Piece can be considered as dystopia because their world is different to our world. See the image on the right>>

Luffy, Zoro, Nami, Usopp and Sanji came from East Blue. They found a way to get into Grand Line.

In Grand Line, they found new crews; Chopper, Robin, Franky and Brooke. Their enemies were far more powerful than when they were still in East Blue.

Dear Oda-Sensei…just do your best, you may make as many volumes as you like and I will still read them…you have never bored me so far. Thank you for sharing your creativity with us 🙂

I haven’t written about One Piece in almost a year, but that doesn’t mean I like less than before…I still think One Piece is the best manga/comic/graphic-novel ever made in this planet!!!

I will try to resume my summary of  their journey this year. I have too many I wanted to write and One Piece summary somehow got delayed most of the time 😦 I will do my best to at least write about One Piece once a month (but I can’t promise it)

The adventures they had been through so far: