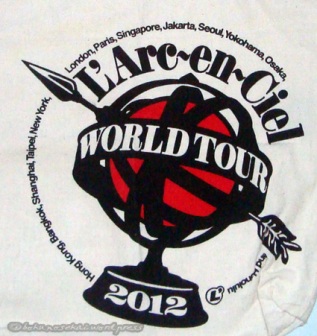 L’Arc~en~Ciel finally wrap up their concert in Hawaii…although they considered Kokuritsu (Tokyo) concert as the Final.

After Jakarta’s concert, the band headed to Korea. One of my old fellow L’Arc-addicts was there to see it. Oktavia Ratnasari (whom I used to call as Setsu) was living in Korea at this moment. Read her report here> Setsu’s Live Report.

After Korea, they went back to their home, Japan. They held their concerts in Yokohama, Osaka and Tokyo. I don’t usually write about their concert that I didn’t see…but these concerts are special…at least to us, Indonesian Cielers.

I am not going to write about the concert, you can read it on the link I have given above. Risa did amazing job translating everything that happened at the concert.

I quoted this from her note because Ken mentioned my country even though it is only about the weather.

When we were touring, the weather was really different wherever we went – some places it was hot, and then the next destination would be freezing!! I didn’t take many short sleeved tops with me, so I was really hot in some countries. Did you guys know that Indonesia was hot?? It was really hot there, so the hotel we were staying at had a swimming pool. Apparently it was open til around 11pm, so one night the stylist suggested that we go swimming. He got me a pair of swimming trunks (audience: let us see it!) what do you mean let us see it? How!? Anyway so I put the trunks on, and I went to the pool at around 10pm. But there was no one there apart from me and the stylist!! I was hoping to see loads of bikini-clad gals! Anyway I got in the pool, but the water was so cold! I tried my best and sat there immersed in the water, but the stylist was so cold that he was just stood there, only hip deep in the water! We decided that we were a bit lonely on our own, so I rang everyone saying “A dolphin show is about to start at the pool!” hoping someone would turn up – we practiced swimming like dolphins and everything! But no one came…and although it wasn’t 11pm yet, they turned the lights off, even when we were still there! So we had to get out…

That was the reason why his MC in Jakarta was this:

“Jakarta tuh panas gila ya? Makanya kemarin gue berenang, pengennya sih sama cewek-cewek pakai bikini, cuma nasib adanya gue dan teman-teman gue. Hari ini ada yang pakai bikini nggak?,”
(Translation: Jakarta is freakin Hot, ne? That’s why I went swimming yesterday. I was hoping for women in bikini, but I was out of luck, there were only me and my friend. Is there anyone wearing bikini today?)

Ken was out luck even at the concert because there is NO WAY he will never see women in bikini in Jakarta during ANY concert 😉 . Wearing bikini in public is considered as pornography in my country (the law is less strict in Bali).

Reading Risa’s report made my heart bloomed like flower. Ken remembered my country 🙂

Apparently, Ken was not the only one who remembered us 🙂

In Osaka, this is one MC that made me damn proud of all Indonesian Cielers and of the excitement we have shared with the band, Hyde said something that touched every Indonesian Cielers hearts and made it impossible to move on from that memorable May 2nd.

Osaka…so we’re in Osaka today. L’Arc were formed here, 20 years ago. At first we were even doubtful that we’d go to Tokyo… (looking at tecchan) we thought no, it was too early to head to Tokyo. But now look, we’ve even been to Jakarta. I saw some people at the back who looked like they were from Jakarta. I think they were really from Jakarta.

Can you believe it??

He DIDN’T mention big cities like New York or Paris or London as a comparison of how far they have traveled…he mentioned JAKARTA!!! When it comes to well-known cities, Jakarta is nothing compare to NY, Paris and London…but to Hyde, Jakarta is setting bar. I think it is because we had given them such a blast. As Tetchan said ‘Jakarta is the best crowd ever and he hadn’t had a blast like that in the past 15 years‘

Wherever we went, everyone’s smiles were the same. Even if they were people of different nationalities, their facial expressions were the same. They looked really happy. Really cute. The thing I love to see most is to see people crying, like “they’re here~~!”. It makes me go “Aww you’re crying. Yoshi yoshi (word used when you pat someone on the head)”.

I am one of those who cried 😉 … it would be wonderful if he really patted my head ;p

So it was a brilliant tour. It’s amazing that even after 20 years, there are new things to discover. There was a period when I thought that there was nothing left to discover, but there was actually plenty more. The band continues to surprise me. It makes me wonder what will happen after 30 years. It makes me wonder… we’ve become a band that’s loved all around the world. L’Arc~en~Ciel were truly loved everywhere around the world. Thank you for all the love you’ve given us. Thank you. This is our final song, Niji.

I also wonder what will happen after 30 years……I hope they WILL NEVER disband!! I want to hear their songs and see them perform no matter how old they are. 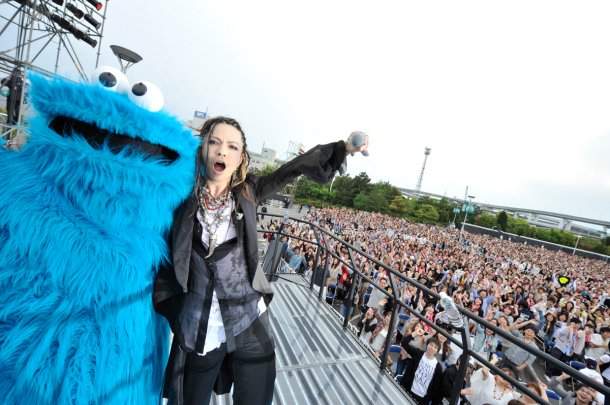 They closed their Japan tour in Tokyo. But before the concert, Hyde was interviewed in Mezamashi. Too bad the video in youtube is already been deleted, but fortunately I have downloaded it 🙂 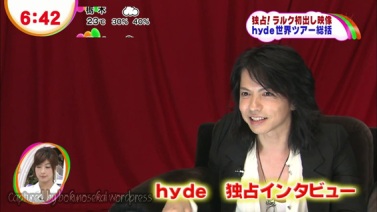 The video was 2 minutes 42 second and boy o boy…Jakarta was shown most than other cities. They only shown audiences (during concert) in 3 countries other than Japan, it was New York, Paris and Jakarta. They showed Bangkok in airport, some fans carrying letters saying they have waited for 13 years.

Here’s how long they showed Jakarta, Paris and New York

It was CRAZY!!!! May 2nd came rushing back in my memory like it was just yesterday. Thank you L’Arc~en~Ciel for loving us back 🙂 Jakarta will always love you and wait for your return 🙂

It felt the most like ethnicity didn’t matter anymore. The way they receive our music and their smiles are the same in every country. Even if they’re of a different nationality, or religion – they all had the same facial expression

Thank you Risa for the translation 🙂 she did WAY better than me in  translating this. Her full translation is here.

I think we played great lives in each of the places we went, and that it was memorable for all the fans around the world. I think the band will continue together in the future, so please support L’Arc~en~Ciel. We’ve nothing planned next, but let’s play again together. Thank you.

Yes You had shown us AMAZING Live!! I will always support you guys \(^^)/

I couldn’t find the photo anymore, around the stadium, the flags of each country they had visited were raised along with their world tour logo. Seeing Indonesian Flag there made me prouder than seeing it in Olympic…I know it sounds weird but that is how I feel.

At their final concert outside Japan, it was at Honolulu, Hawaii. Read the report in Kawaii Kakkoi Sugoi.

Translation by Risa: On the 31st May, L’Arc~en~Ciel held their ‘L’Arc~en~Ciel 20th L’Anniversary Year Live in Hawaii’ at the Waikiki Shell, Hawaii, USA, to mark the final show of their 20th anniversary world tour. During the show, it was revealed that the city of Honolulu had declared the 31st May as ‘L’Arc~en~Ciel day’. 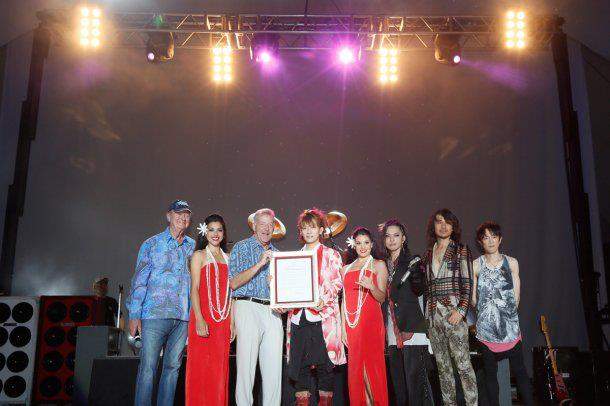 Did you think the world tour hype dies down after that?? 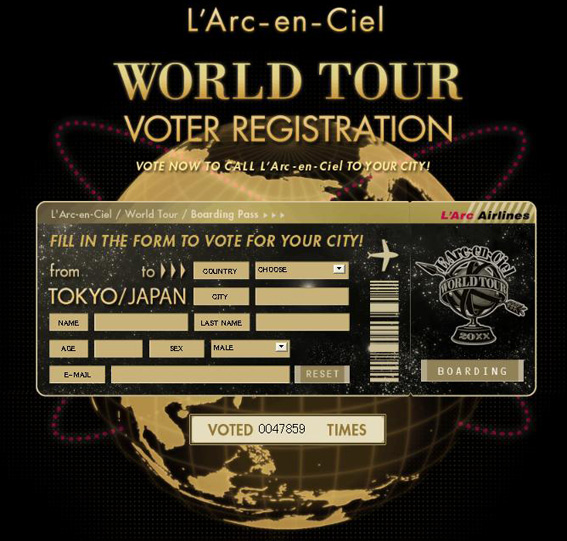 The whole country…well more like the whole L’Arc~en~Ciel fans in Indonesia went crazy as the vote opened at June 1st. The server was not working well because people from around the world trying to vote at the same time.

We finally able to vote a day later. We are all trying to get them back to Jakarta. Although I am confidence that with or without the vote, Laruku WILL COME BACK to Jakarta because I can see their happy and satisfied faces and they they talked about Jakarta gives me more confidence.

We will be waiting for you to come back and we will sing together again like there is no tomorrow.

I am going to close this post with a photo of me and my friends in Hot Game Magazine. (finally I can find my photo with my banner)

To Risa @ L’Arc~en~Ciel UK Fans Unite (English Street Team): Thank you sooooo much for the translation and sharing it to us, keep the L’Arc Love alive!!

This happened through twitter from a friend of mine ( @Aochaki ) with a Japanese who is a member of LeCiel and attending special event at Hawaii, her twitter account is あ様 is Dead (@Alice_in_Heaven) 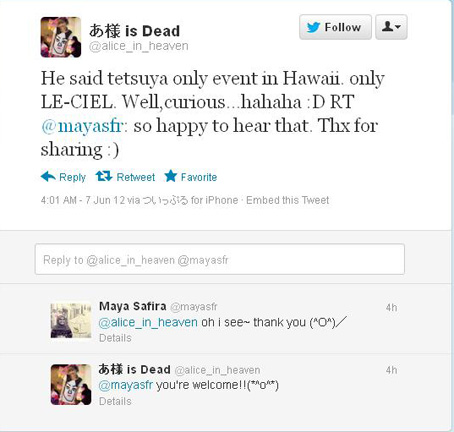 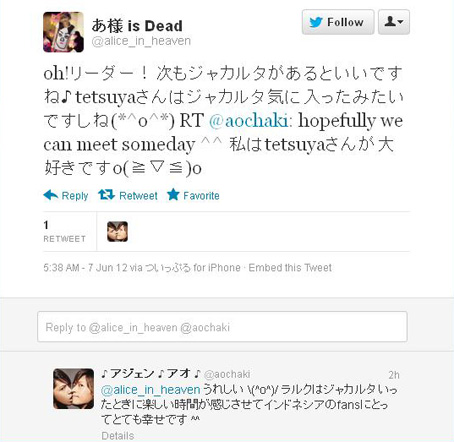 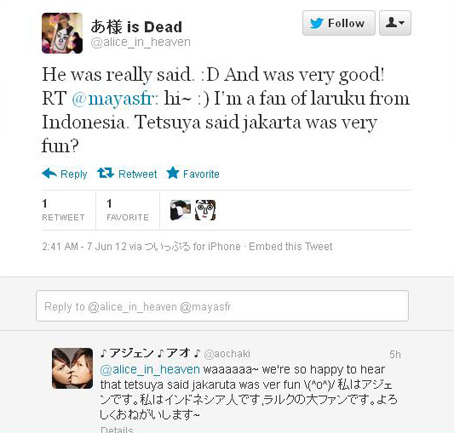 The live in Jakarta was ready perfectly and fans were so excited before starting, so i enjoyed so much!

Now…let me ask you…if you are an Indonesian fan who had taken part of this history…wouldn’t you be as proud as I am? 😉