Did you know that I almost went to Singapore?

When I first heard that L’Arc~en~Ciel was going to play at Singapore, I couldn’t stay still and going. They are going to so close…and it’ll kill me if I don’t go…but then the wonderful news came out, they are also going to play in Jakarta…so the plan to go to Singapore never happened. However, I am now saving some money so that when they decide to do another world tour, I can go to countries near Indonesia so that I can see them more then once.

Let’s put my story aside for now 😉

A nice girl from Malaysia went to Singapore because L’Arc didn’t visit Malaysia. Her name is Ilina Syazwani Musa or known as tkbluestorm in this blog of mine. She is one of Laruku’s fans I met here in the internet world 🙂

She wrote great report in the comment form and I think it is far better to make that super long comment as a blog post. She kindly sent me her photos on the venue to support this post 🙂

I will let her do the talking now 😉

We arrived in Singapore in the afternoon. Then, we went to stadium and met some our Malaysian friends around 5.00 pm. Initially, I only wanted to buy the premium package and lightstick, but when I saw my friends bought other merchandises, I also bought the things that I didn’t planned. But I never regretted it. In fact, I think I should bring more money because I never knew they would sell cd and dvd at the entrance of the arena. The concert merchandise you can buy them even you didn’t have the ticket from the booth which is located outside the stadium, but the cd and dvd, you only find them after you entered the stadium. I’m not sure about it in Jakarta. I hope they also sell the albums there.

Oh.. actually we were interviewed by the staff (video recording). We never expected the staff would approach and asked us about laruku. I think the staff only select certain fans to be interviewed, because we saw he asked the fans who cosplayed like laruku members, Indian fans and we, who were wearing hijab. He asked where we came from, we answered ‘Malaysia’. but he heard something else.. ‘Indonesia??’.. We said it again, ‘No.. MALAYSIA!’ lol.. Next time, I think we should bring Malaysia flags. Maybe the staff knows that laruku has a big fanbase of Indonesian fans, but not Malaysia. Never mind that. I hope we can see our faces in DVD tour.. hahaha..

From your post, I could see the excitement from Indonesian fans. As far as I’m remembered, I couldn’t find any laruku billboards in Singapore streets. We planned to take picture with poster or laruku banner, but we couldn’t find it when we were at stadium area. After the concert ended, we found out the banners were prepared by Singaporean Street Team at the other side of the stadium. huhu..

In your previous post, you only listed 14 songs, but you forgot the 15th song, ‘Seventh Heaven’ as one of the songs that they sang in every concerts. The other songs they performed in Singapore were ‘Hitomi No Jyunin’ (my most favorite song!!!), ‘The 4th Avenue Cafe’, ‘Daybreak’s Bell’ and ‘Blurry Eyes’.. The other three songs are also my friends’ favorite (each song for each friend). We were so happy!

Ok, now the stories of the concert. We already read the projects planned by Singaporean Street Team in the fb. They also distributed a piece of paper to other fans before the concert started, so that everyone know what should we do during the concert. The Singaporean Street Team suggested ‘Pieces’ to sing along together during break before the band played Anata. But it didn’t work successfully, only the fans in front of stages sang it, some of us didn’t get the signal, and the other crowd shouted ‘encore’ loudly. I hope your plan to sing Bless after Niji will work perfectly tomorrow.

About Hyde………… Ya ALLAH~!! why he’s so beautifullll??? Especially when he sang ‘Forbidden Lover’ with hat, he really looked like a woman. We sat in the middle of arena, not so close but not far away from the stage. He’s really tiny, so sometimes, I lost him from my view.. hahaha.. I read a lot of reviews about Hyde, but now I really admitted what they said was true. HE’S REALLY SEXY IN HIS OWN WAY.. His hip movement was really alluring, made fans, especially fangirls screaming. Luckily, one of my friends didn’t bring her husband along to laruku concert. hahaha.. I swear, no man in their forties that could make the same effect to the other women like Hyde.

The other members, I’m sorry, I didn’t really pay attention to them. Tetsuya and Ken, playing their bass and guitar like you see them in dvd concert. Yukkie, I think he got thinner than he used to be. My friend commented that Hyde looked so young, we believed no botox as we can still see his wrinkles sometimes, but maybe he used some advanced facial treatment. Tetsuya, his eye bag was really obvious.

We were reminded by Singaporean Street Team to stay silent when the band performed the ballad songs. I thought we would follow the rules, like Japanese fans, but nah… everyone sang along together with the band. I believe it depends on the culture. In Malaysia, it is common for the audience to sing together if the song are really famous. Maybe the Singaporean also share the same culture. haha.. Anata is my second favorite song. I imagined that I would cry if I listened this song in the concert. Eventually, I just enjoyed sang along with other fans. Oh, Novroz, don’t forget to buy lightsticks. In Singapore concert, there are some fans who didn’t buy it, they just came and sit.. Personally, such people spoiled our fun, but cannot blame them at all. Believe me, if everyone give cooperation, the concert would be fantastic.

Not much fanservice in this concert. Just winking and blowing kisses from Hyde. No kissing and no ‘masuk celah kangkang’ ( I don’t know how to translate it in english.. maybe, ‘go through under leg’.. lol..). When Ready Steady Go was going to play, Hyde asked the audience ‘are you freaking ready?’, instead of f-word like he usually used.. hahaha.. Ken also didn’t smoke during the live.

The concert was really amazing. When I saw Hyde dancing, automatically it also made me ‘goyang kiri kanan’ and jumping. But somehow, I remind myself to restrain myself. Well, other people would say, it is inappropriate for a Muslim woman to lost control in front of public, but my friend said ‘Who cares? Nobody knows us in Singapore!’ hahaha..

The last song they performed for the concert was Niji. Hyde’s really delivered it beautifully.. Finally, I shed tears after the song ended. Two hours concert was not really enough for us. We have been waiting for them for so long. Before this, I never imagined I could attend their concert. If they hold their concert again in Singapore, I would definitely come there again and chose the seat in front of stage. But if any Malaysian organizer can bring them here, it would be better. I miss them already~!! 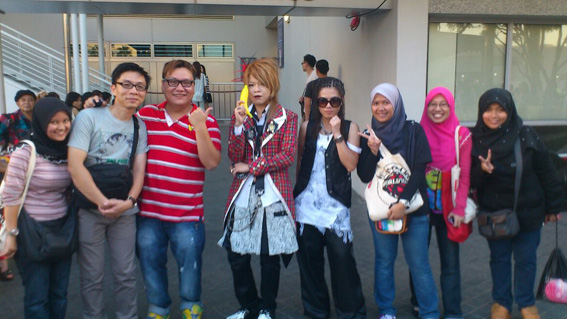 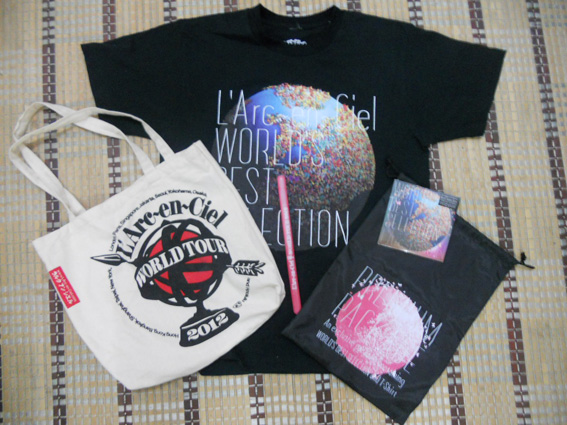 She also provided me with some links: To see more photos of the concert ( a day in the life of BE@RBRICK ) and to read another live report ( ameblo.jp )

I have to agree with you that Hyde is the prettiest man alive!! he is even prettier than any woman I have ever seen in real life.

and about this sentence: “…but somehow, I remind myself to restrain myself. Well, other people would say, it is inappropriate for a Muslim woman to lost control in front of public” << Gyahahaha I totally lost control!!! When they were doing rehearsal, I even said “excuse me sir, but at this moment we are shameless Muslim women, so can you please move over! ” to some people whose place we borrowed to peek over. And have I told you I scream when Hyde’s chikubi was peeking through his clothes? hahaha I am totally shameless at that night 😉 (ps. to know what chikubi is, do find a Japanese dictionary, I fell safer using that word than the English one 😉 )