IT WAS THE MOST AMAZING CONCERT I HAVE EVER SEEN IN MY ENTIRE LIFE!!

I often said that I like Muse but then I love Muse after I saw their concert…but L’Arc~en~Ciel is the band I have already loved with all my heart even before I saw the concert…and now that I have seen their concert…I LOVE THEM BEYOND WORDS!!

Ow…I don’t know where to begin, I still feel like I am in a dream…a dream that I wish never to stop…the concert was SUPER AMAZING!!!  And to top it all…I GOT WHAT I WANT!!! I WAS THERE RIGHT IN FRONT OF THE STAGE, CLINGING TO THE BARRIER…. GYAAAAAAAAAAA… they were so f*ckin close!!!

I stand about 2 meters from Hyde!!! Gyaaaaa, it was unbelievable!! He is even more beautiful in real life…ow my God, how could You create the prettiest man alive to have such beautiful voice? He is prettier than most woman I have seen!! And right behind Hyde is Yuki….aaaaaaaaaahhhh!!! Yuki is incredibly handsome, and those biceps…oh my God, I am speechless! Ken is enjoying the concert despite of the heat. Ken is always Ken! Techan also often stood so close to me, ow he is sooooo cute!!! But…my attention was mostly toward Yuki and Hyde 😉

Because I have been waiting for them for 11 years, I don’t feel like taking any photo and video of their live, I want to enjoy every second of the concert with my own eyes and ears, I didn’t want to be distract by taking my mobile and shot the concert. They won’t allow camera but even if there was no such rule, I still had no intention to take pictures…therefore I am relying on the internet to provide me with photos 😉

Just like in other countries, their set list was identical. It started with video showing the name of each city they are visiting during their World Tour 2012…and then they showed up and started singing Ibara No Namida…I couldn’t contain my tears anymore…I kept saying “Ow my God, this is really happening!! Ow my God I can’t believe this is happening”…same sentence over and over again. Hyde hadn’t realized how crazy Indonesian fans are till he heard everyone singing Chase with him. Everyone was shouting the refrain at him “I am chasing you…I am chasing you…get away”

They continued it straight away with Good Luck My Way…owww I started jumping up and down even though I had very small space to move. Then Hyde took his guitar and started speaking in Bahasa Indonesia 😉 His pronunciation was quite good till he said “Selamat Menikmati”. He said “Halo Jakarta (he send kisses to us). Kami L’Arc en Ciel. Kalian senang bertemu aku? Aku?… Aku juga.. Aku juga.. Jakarta selamat menikmati ” it was the opening of Honey. Drink It Down followed afterward. When REVELATION started…it was just as I imagine it to be with extra reality. We were all shouting “hey…hey…hey” with all the passion we have inside. Hyde looked so happy with our excitement. Revelation was breathtaking 🙂

They went inside for a while and then everyone came out and sat near Yuki’s drum…they sang Hitomi no Juunin…and ow my dear Lord, I cried all through the song!! It was so beautiful…writing this made me want to cry again…cry of happiness. I shouted “arigatou” over and over again at them, one of the camera men even recorded me saying Arigatou…they might see the video 🙂

They sang XXX-English version after HNJ, I was lost for words because I only knew the Japanese version. However, the girl next to me, Mae,  and I were actively doing the cross with our light stick and singing the refrain passionately. Fate followed afterward…and we all sang along with him. Forbidden Lover was the next song and ow dear..ow dear…Hyde shed a tear…gyaaa I shouted at top of my lung “Nakanaide!!!!” (don’t cry!)

Ken and Yuki were left alone on the stage, I took that moment to shout at their names over and over again. Ken played the intro to My Heart Draws a Dream and we all started singing “yume o egaku yo” following Ken’s solo. MHDAD is the kind of song where Hyde always let audience to sing “yume o egaku yo” and he will sing the other line of the song. I do believe Hyde let us sing “yume o egaku yo” longer than most concert in DVD I have seen. Hyde was so pleased with Indonesian Fans…well at least that’s what I saw on his face.

It was time for Ken’s MC…and as always ken liked to talk about girls … girls with Bikini ;). Ken kept saying mantap (great) and then cut the word into man and let the audience to finish it with tap. Ken gave a gift to Hyde (he has been giving gifts to different Laruku member in each concert.) the gifts were wayang, gamelan and suling….gyaaa Hyde couldn’t paly the suling and he seemed to enjoy playing with the wayang ;). Seventh Heaven came next and I was at my craziest moment …I jumped and sang and danced all through the song…everyone else seemed to be doing the same thing as I was. Techan and Hyde looked so pleased at us, Indonesian Le Ciel or Cielers.

Driver’s High once again made audience Jumped and Shouted. We did something different to other country, we keep shouting “oi…oi…oi” when the song had just started.Hyde let us sing a part of the song and he looked so delighted at us:

I could be wrong because I can’t remember all, but I think this is the first time he gave the audience his mic to sing this part.

And then…Aaaaa…Tetchan took his famous banana and used it to play bass and then threw it to the audience…the benefit of seeing them so close is a disadvantage when Tetchan started throwing his banana. Stay Away was next…again, we were all singing the song with all the passion we had. I was having problem to clap hand at specific time in the song due to the light stick…but I managed 😉

Hyde started shouting “Are You Fuckin Ready??” and Ready Steady Go started…gyaaaa I enjoyed this moment of singing and jumping together soooo much. RSG became the last song before their break. Yuki did his solo here…and we did something no audience ever did in a concert…we were shouting Yuki…Yuki…Yuki following his drum beat.

While waiting, we tried to make a human wave while I was busy tying by banner to the barrier, I thought it was the perfect time to let them see and read it. Once I finished tying it, their crew took a shot of it (I just remember I haven’t taken picture with my banner). This is the banner I have made for them 🙂

Translation: I have been waiting for 11 years, Thank you so much for coming to Jakarta.

We, then, sang the refrain of Anata and rain started falling down. Fortunately they continued the concert and sang Anata. Singing anata made me cried all over again, it was worst than during HNJ…I was crying all through the songs. Hyde let the audience to sing during the last refrain of the song. It was the most romantic moment in the concert, anata with rain falling down…ow sooo amazing.

…and…Hyde read my banner!!!!! Gyaaaaa I felt like flying to the 9th cloud…he actually READ it!!! I could see his eyes following the words…And when anata was over and the light turned dark, I shouted the words at them and they heard it…I know they heard it…God I am soooooo freaking happy!!!. Their camera man also shot at my banner….huaaaaa I am glad I made it 🙂

Something amazing happened when Hyde sang Fourth Avenue Café, because we all sang along with him…he let the audience sang the last refrain before he closed it by himself…I haven’t seen such action before in any DVD I have….it was so awesome! The part he asked us to sing is this part:

Link came afterward…whuaaaa loving it soooo much!! Jumping is a must in this song. Tetchan used Link to throw more bananas and lollypop to the audience. We was saying an absurd sentence than made all the girls think dirty, “apakah lo mau pisang gua?” dan “apakah lo mau jilat lollypop gua?” (do you want my banana and do you want to lick my lollypop?). Once Link was done. We were all shouting Blurry Eyes over and over again, Hyde was a bit surprise by that…too bad he didn’t sing it.

They closed the concert with Niji. We sang all through the song and I think no one wanted it to end…we all want more, it felt so fast…and then … we sang our Bless Project!!!! And they heard it!!!! At least Hyde heard it and I could see his face, he was touched by it!! He was touched by our way of showing gratitude by singing their song Bless over and over again 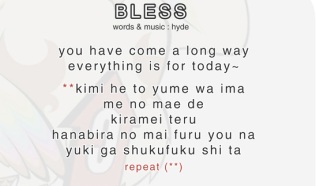 They promised to come back again to Indonesia \(^_^)/…and I will be there again!!!

One thing I can assure you, they had great time in Indonesia…not only us. We can all see it clearly on Hyde and Tetchan’s face, they were happy with the audience. I hope I can find article of them saying their opinion on the concert. I LOVE EVERY MOMENT OF THIS CONCERT, I WILL TREASURE IT MY WHOLE LIFE 🙂

Important: Someone apparently threw something during the concert, I need to clarify that my banner was thrown AFTER the concert when there was no member of Laruku. It was actually the diehard fan’s idea. I was folding the banner to take it back home and then she asked do I want to give it to the staff, I said yes…but after several times calling the crews and everyone was busy, she said just throw it the staff will pick it up. I hesitated and asked her ‘ii desuka? daijoubu?’ she convinced me that it’s alright. She even threw it for me because I wasn’t sure I could throw it that far.

If she didn’t tell it was alright, I wouldn’t do it. I trusted her because she had followed Larc everywhere.

Thank you L’Arc~en~Ciel…you have given me such great happiness after all the pains I had before…you truly are THE BEST!!