As I have shared in my previous post about me getting the ticket, the race to get the ticket was quite intense.This is just a brief info of what I have read through out internet and from my friend. I usually don’t give care about ticketing, but this one is special….it’s L’Arc~en~Ciel’s concert in Jakarta!! I want to know how it goes.

There were 4 quotas of ticket selling.

During the pre-sale (January 27, 2012), they were sold online in RajaKarcis.com:

During public sale (January 28, 2012), they were sold online and offline at Raja Karcis:

What I knew from my friends who were trying to buy the tickets:
Online: VIP Tickets were sold-out in 5 minutes, the premium followed not long after that.
Offline: It took longer time because people have to queue up, but VIP also sold out the moment the tickets were ready to be sold. The ticketing opened at 9, my friend got there at 7 and already in waiting list number 63.
From what I gathered in the net, VIP was all out and premium was rare that day.

People said that at Panorama (another offline ticket) , some premiums were still available.

Now this is the amazing one!!
Apart from regular tickets, the other two tickets were sold out in 15 seconds!!!
The site claimed that there were 1500 people on their site at the same time fighting for the ticket.

Peter Harjani from Marygops Studio was very surprised at the enthusiasm of Indonesian Cielers. He said that he didn’t expect it to be like that because Indonesia is currently in K-Pop (Korean pop) fever. He was amazed with how loyal the Cielers are.
Someone replied him (and I completely agree) by saying “fever is a kind of illness, what we feel is a life time commitment.”

I read a twit from Raja Karcis last night, they are going to sale the overdue tickets today. Good luck to those who haven’t got the ticket \(^^)/

I will review this album once my order has arrived….I am waiting impatiently for this. I have downloaded the songs because I can’t be patient but will not review it until I have the album on my hand.

Here are the things I will get from my limited edition…quite expensive but who cares!!

I have shared some of their singles in here, but 3 videos have been deleted by youtube 😦

I am not going to say much, just read this 😉 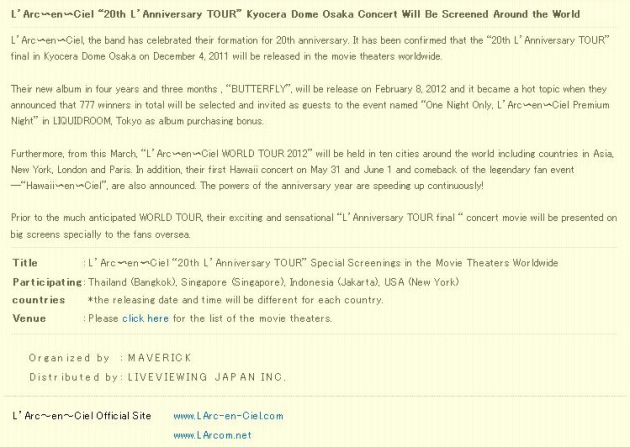 Horaaaaaayyyyy….Jakarta gets 2 days!!! We also get the most day in the previous Live Viewing. I can’t wait to see it…a nice prelude to the real concert (*.*).

I hope I get the ticket, in the previous Live Viewing…the tickets were sold out in 8 hours and that’s why they added 1 more day for Jakarta because a lot of people wanted to see it.