Without further introduction, here are my top-5 books of 2011: (I am excluding Manga)

A book I read because of Muse. I have heard so much about this book but Muse’s song United State of Eurasia was the one that made me finally decided to read the book. The idea of this book is insane!! It’s amazing how Orwell managed to create such world into something we really believe it could happen.

Summary: 1984 is a dystopia book where people no longer had the privilege to feel. The government controlled everything. The government slogan was WAR IS PEACE, FREEDOM IS SLAVERY, IGNORANCE IS STRENGTH

When I read the first few pages, I instantly understood why the book drawn Bellamy so much. It was so full of frontal conspiracy. The way the Superstate controlled the citizens was so based upon distrust and brainstorming. The people hardly have any friend because they were afraid their ‘friend’ will turn them to Though Police, even the children report their parents to Thought Police. 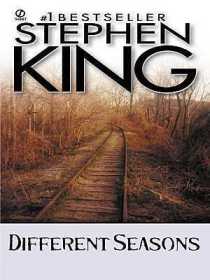 Different Seasons showed Stephen King’s other side. This book consist of 4 novellas with 2 novellas that have no horror or thriller at all and I could easily say that those were one of his best works.

Summary: Rita Hayworth and The Shawshank Redemption (a great story of the power of determination), Apt Pupil (a disturbing story of how a person’s mind could easily be corrupted with stories), The Body (a  deep story of friendship and what comes between them), The Breathing Method (a bizarre story of mother’s love)

Summary: blood-soaked girl shows up at a police station requesting to speak with a specific detective—who doesn’t even know who she is—and he must figure out what happened to her and her family. They were supposedly trapped in an old bomb shelter by a demon, but was it really supernatural forces, or was it something more logical hiding behind the curtain? (Borrowed from the author’s own words)

Even though it was written in flashback, Nick managed to keep the thrill going on. I was glued and eager to know what happened to Aidyn and at the same time I was also curious about Paul. Both stories were carefully written so that we won’t get bored in one of the stories. I couldn’t remember the title anymore, but I once read similar book (a flashback story) that made me bored when the story was focusing on certain time because it wasn’t as engaging as the other story. The reason why I found it difficult to stop reading is because both stories are equally interesting. The way it inter-crosses each other is also written in a natural way, I don’t feel like reading a forced link.

Nick is the owner of a blog called Random Ramblings of a Demented Doorknob.

The second book by SK that made it into my top-5 list. Full Dark No Stars is a book of 4 novellas that centered on how people dealt with guilt and anger. All four of them were brilliantly crafted. Although my favorite was Good Marriage but I also love the other three stories.

Summary:  1922 (Was killing someone solve the problem?), Big Driver (Will you report that you have been rape when your career might be jeopardize by it?), Fair Extension (Will you let your friend that you envy the most suffer to no end?), Good Marriage (Will you tell the police that your husband is a serial killer?)

I have just finished Full Dark no Stars and it is AMAZING!! I love all the stories in the book. Don’t expect monsters and ghosts in this book, although there is one ghost and one representative of devil, but the main idea of each story is human heart and how human deals with specific situation.

It’s one of the books that I find hard to put down. It’s brilliant and intriguing. It’s gruesome and yet understandable. Simply said, I love the book. Keep it coming Mr. King.

I couldn’t believe that just like 2010, my number one book of 2011 was a reread book. I guess that’s why I read those books again. Although I wrote the review few days ago, but I have finished the book on late December. I adore this book because of its powerful story that involve 42 students with different personalities

Summary: In an alternative future Japan, junior high students are forced to fight to the death! L to R (Western Style). Koushun Takami’s notorious high-octane thriller is based on an irresistible premise: a class of junior high school students is taken to a deserted island where, as part of a ruthless authoritarian program, they are provided arms and forced to kill one another until only one survivor is left standing (from the book’sblurb)

But now that I have read it for the second time, I realized more how Koushun Takami had brilliantly created a class full of students with different personalities. He managed to let us know all 42 students even though they only appeared in one chapter. He didn’t let any even 1 student died unnoticed or personality unknown. He made sure that we know what kind of person that student was and how tragic or silly his/her death was. I felt like I was running around in that island with those 42 students, none of the student was forgotten.

I never thought that will be, somehow similar to 2010. 2 Stephen King’s books and a reread as number 1. Last year was The Two Towers & The Return of The King.