The first plan was to write about Retreat this month and write about In Time next month, the arrangement is to prevent too many Cillian Murphy posts in one month…however, things changed after I saw In Time few hours ago. I just couldn’t delay the fact that both Retreat and In time totally lived up to my expectation, one in a good way while the other in a bad way.

Retreat is an independent physiological thriller that depends on the acting ability of its 3 leading roles. And whatever ending it is you have guessed, trust me…you guessed it wrong!!

I love this movie!!! Love it so much and almost give it 5 stars…unfortunately it isn’t thrilling enough and the characters aren’t strong enough….therefore I can only give it 4 stars. The ending is perfect and unpredictable…I always love unpredictable ending. I also love movie with less actors.

Martin Kennedy (Cillian Murhpy) and his wife, Kate (Thandie Newton) tried to fix their threatened marriage by visiting the island they once visited. In the first 15 minutes, we could see how this couple was so distance. But we can see that Martin was trying hard to glue them together again. Kate was the one who kept making the distance bigger and bigger. Kate even tried to cover her body with towel when Martin was about to get into the bathroom…it was as if they were a couple of strangers. 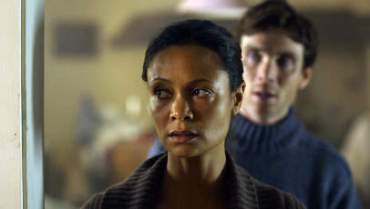 The slow rhythm of the movie started to change when the generator blew up and the cottage keeper never showed up. A couple of days later, someone landed on their little island, but it wasn’t the keeper, it was a man in army suit. The Kennedys took him inside the cottage, they thought they had to help him. Their kindness was a huge mistake that ruined their chances to save their marriage. 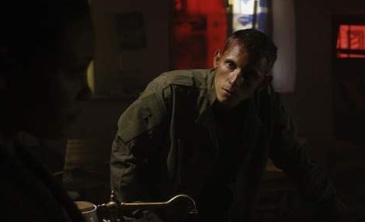 Jack Coleman (Jamie Bell), the army they have saved, told them that there was a virus outbreak and the main land was almost empty. They had to protect themselves too by covering all windows with plastic as a way to prevent the virus from getting in and by boarding the windows and door with woods so that infected people won’t get inside. Upon hearing that story, Martin wanted to believe but Kate completely distrusted Jack.

Now, take a guess!!  Is Jack a real deal? Or jack simply wants to terrorize the Kennedys? Or you have other in mind? Take a pick and let me know…maybe you’re right!

I got it totally wrong!! I was so impressed when the real thing finally unfolded…but Carl Tibbetts didn’t leave one surprise, he gave another one that made me stunned. I was mesmerized…so unpredictable….at least for me, I couldn’t guess it. And for that I love this movie.

As I have said above, the story was great but the characters weren’t strong enough. I didn’t say that the actors acted terribly…they were great. Cillian, Newton and Bell weren’t at their best but they sure pull it off. The problem wasn’t in their acting but it was in the characters built up. Jack wasn’t menacing enough, Kate was too hysteric and Martin was too week and washy-washy. None of the characters are likeable. Maybe it was because Tibbetts wanted the characters to be as ordinary human as possible. I can see how ordinary they are!!

Overall…it is a great movie. And it proves again that Cillian’s independent movie is better than his blockbuster one (read: In Time). I have just found out that Retreat was played in INAFFF 2011 (Indonesia Fantastic Film Festival) on Monday 14…too bad I missed seeing Retreat in cinema 😦

Unfortunately I can’t do my usual Cillian Murphy Special (many snapshots of Cillian) because my DVD-room isn’t working. Will update this post later. Meanwhile, here’s what I got from google.

Don’t forget to check the next pages 🙂

Page 2: Review of In Time (Don’t read it if you don’t want to be spoiled, it’s more like a rant rather than review)
Page 3: Retreat Vs In Time Part 2