This is going to be my favorite post of this month because I LOVE writing this concert review. It’s been a while since my last concert review. They just had a long break, so not many concert DVD was released in previous years. The latest concert review was Are You Ready? また ハ-ト に火 を つける! In Okinawa.

L’Arc~en~Ciel, the first reason I made this blog and the only band I want to see before I die (meaning that I don’t mind if I can’t see other bands as long as I live if I can see them  at least once). This band has been around for 20 years…quite a long year for a band and hoping that they will never break up. Last May, on 28-29, they held their 20th anniversary concert which they called as 20th L’Anniversary….how I love to be there…but I couldn’t 😦 (this is the time where I regret I don’t have plenty of money).

If I am not mistaken, it was in 30 May 1991 when they first held their performance in a small club seen only by 120-130 people…and look at them now. 2 days sold-out concert in big arena…what a beautiful scene 🙂

They are currently touring around Japan in their 20th L’Anniversary tour. They will visit Bangkok, London, Paris, and New York next year. I hope they will visit Indonesia, or at least Singapore…I will come and see them if they come to Singapore. I am currently in the process of making a passport in case they decide to perform in Singapore….just to be prepared.

Let’s move on to the concert shall we 🙂 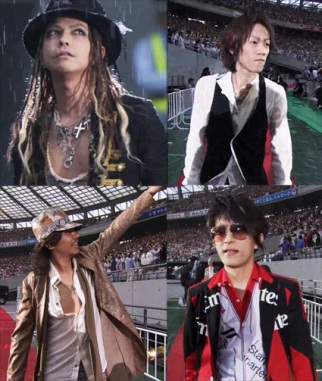 This concert was shown by WOWOW for national consumption but some people kindly uploaded it for the fans from outside Japan. WOWOW only showed 19 songs, 8 from day 1 and 11 from day 2. L’Arc~en~Ciel usually released the official DVD later (just like their 15th L’Anniversary).

The concert on the first day, May 28, was special for songs from Dune to Heart (5 albums in total). They came from the other side of the stadium in a black car. Ken with Tetsuya and Hyde with Yukihiro, they came out of the car and walked to the stage while once in a while waved at the audience. The rain had started falling a bit.

Their started their performance with In The Air. The performance gave me chill as I haven’t heard this song performed live in many years. I love the bas intro so much.  Yuki hit his drum differently compare to Sakura (the old drummer), I like Yuki’s way better. Hyde’s voice was not as clear as it used to back when the album first released, but it was still great.

They continued with Caress of Venus. The song started with a blast of golden paper. They started moving around exploring the stage. Next song was Dune, Hyde moved in his girlish way. They really didn’t care with the rain that had begun falling heavily. I really like when the audience sang along to the chorus, I also sang it even though I was only watching it in my computer 😉

Blurry Eyes had a great opening, they showed the carousel from the music video (PV) and then the sound of the keyboard as the background music…but they changed the drum and guitar intro, I like this changing intro. Then the famous intro finally heard along with fireworks shooting from behind the stage. I love the improvisation Yuki made on the drum beat. I know this song by heart, so I sang along with them. Lies and Truth came up next. I love how they split the big screen into 4 parts, the audience could see all four members o the screen. The cheerful Flower was next on the list. Hyde didn’t lower his voice in the part where he has to sing ‘Like Flower’, he often lower that part in previous concert. In the end  of the song, big balloons started falling down and bounced around the audience.

The famous drum intro of Shout At The Devil followed with green light moving around made the audience jumped up in excitement.  I always love seeing this song performed live as they always showed great spirit in singing it. Then they toned in it down a little with Anata, the song I want to be played in my wedding 🙂 . They started it with piano intro while the light on the stage was still turned off. The sound of the piano gave me chill of excitement.  The audiences flashing their colorful fluorescence light and the stage covered with blue light…beautiful sight for such beautiful song. And I got Goosebumps again when the audience sand the chorus ‘Mune ni itsu no hi ni mo kagayaku, anata ga iru kara. Namida kare hatetemo taisetsuna,anata ga iru kara’. Incredibly beautiful! The first day was closed with Niji, a song with a very beautiful lyric and has sad history behind it. The stage turned into the color of rainbow (Niji means rainbow). I love seeing the words appeared on the big screen. The only thing missing from this performance was the falling feather.

The second day, May 29, started with down pour…but the fans were still excited. The crew had to wipe the excess water off the stage. There were 3 canopies on the stage to prevent Yuki, Tetsu and Ken from being totally wet…but they were a bit useless as Ken couldn’t stand still. The rain was worst that the first day. Yuki started the show by playing the intro to Ready Steady Go. Ken and Tetsu came out afterward and Hyde came the last. I honestly don’t like Hyde’s outfit…looked so weird!! Ken stepped out of his canopy comfort zone straight away. He and Hyde totally ignored the rain. Heaven’s Drive came up next and followed straight away with the sound of a motorcycle as the opening of Driver’s High. The big screen split into 5 smaller screens.  Drink It Down followed afterward. Ken looked so excited in this song. Second day was full of energetic songs.

All the light suddenly turned off and the intro to one of my most favorite songs, Lose Control, was played in dim light. The timing of the fire was so perfect, the angle of the camera was also great…that was one of the best Lost Control performance I have ever seen. I love it so much!! The dark really made it felt so dramatic. Then Tetchan did his solo as the opening of Stay Away. The big balloons showed up again, more than the previous day. And of course, Hyde came to Tetchan to sing together, a scene most fans enjoyed to see. Without delay they started the cheerful Link. Love this song so much. The rain had fallen worst than before but they really didn’t care about that. There was no break in the middle of the song as they usually did before. And of course, Hyde did that famous pose while singing it, laying on the floor acting all sexy 😉

They finally toned down the beat with Hitomi No Juunin, a beautiful song that I believe to be a song about Hyde’s little boy. The blue light was so contrast with the colorful light from the audience. I was wondering can Hyde hit the pitch and glad to hear he managed it really well. During the guitar solo, the light was shined only to Ken, what a lovely sight and it got lovelier with the sight of blue light on the back of the stage at the end of the song. They went to the backstage and showed up with new outfit and I still don’t like Hyde’s outfit. Their latest single (at that time), Good Luck My Way brought fun atmosphere.

Hyde talked before closing the show with their last song. We can see that he was really touched with their fans for coming despite the heavy rain. You don’t have to understand the words to see how he felt. They closed this historical concert with Bless. A perfect song to close this concert. Amazingly, the rain stopped. At the end of the song, Ken kept on playing his guitar, Yuki kept of hitting his drum, Tetchan kept on playing his bass and Hyde kept on humming as if they didn’t want it to end.

Ken straight away went to the backstage. Yuki did something I had never seen before, waving the letter L to the audience…Hyde was the one who usually did it. I guessed Yuki finally felt welcomed by the fans (I have welcomed you long before Yuki-nichan). Tetchan did his banana throwing ritual and said ‘Mata ne!!’ …and the show had finally over.

I wish I was there.

Compare to 15th L’Anniversary, the stage in 15th was much better than this 20th but the emotion was much better in 20th. I can feel how excited and touched they were. They were all performing as if there was no rain. I can’t wait for the real DVD to come out, hope they will show the whole 2 days performance and an extended  DVD for moments behind the stage…I  won’t mind paying a bit more than usual.

Here is a video from TVK音楽缶 (not WOWOW ), I like how it covers so many songs. Enjoy 🙂 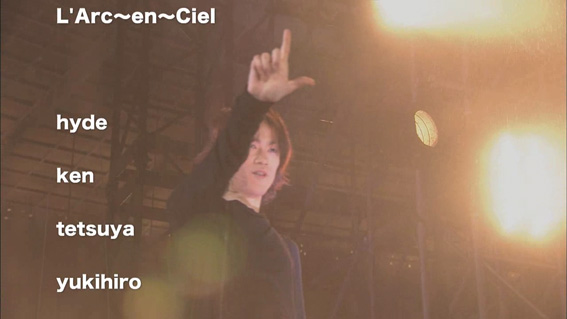