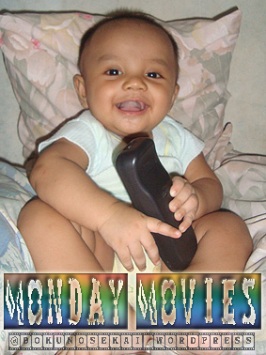 In the last 2 weeks, I got a chance to see 3 movies. I know it’s not many but that’s all I can see in my busy hours. I was planning to see 4 movies but one of the DVDS is not working properly. It was a movie by Keanu Reeves (Henry’s Crime), I have to return that DVD soon.

First of all, we, Indonesian movie lovers, are still feeling terribly sad because there are still no new movies in the cinema. All the Harry Potter fans are furious (fortunately I don’t follow that movie anymore)…but I am afraid this matter will be unsolved for a long time. My only concern now is unable to see Tintin and Now (or I’m Mortal or its new title I have forgotten), tho Now is only going to be watched to see Cillian’s face in the big screen. Yes, I can see those movies in DVD but it won’t be the same as watching it in the big screen 😦

Enough with the sadness…now, let’s talk about the movies 🙂

I watched Incredible Hulk in TV and Priest and Unknown in DVD.

Story: It took place after the first Hulk Movie. Bruce was working in Soda Bottling factory in Brazil. He was consulting through the net with Mr. Blue. He was still looking for the cure or the way to get rid of the green monster inside him. Because of a small drop of blood in the bottle, the army could track down where Bruce had been hiding. He decided to come back to US and met both Betty and Mr. Blue. His enemy, apart from Betty’s father, was a creature called abomination. My Thought:

I like this one better than the first one, despite the fact that Bana is better looking than Norton. I have only seen the first one once and every time the TV reruns it I always change the channel. The first one had better story and better cinematography but Bana was so not Bruce Banner!! His image was all wrong. And what bother me the most was The Giant Hulk…I liked watching the series and it totally annoyed  me to see Hulk turned into that giant, it’s just doesn’t feel right. Norton has better charisma as Bruce and somehow we can see the loneliness and the pain through his face and the way he walked. For short, He is a much better Bruce than Bana.

The hulk had also reduced to his original size…good for him and I can tolerate this hulk. However, I prefer seeing Jennifer as Betty rather than Liv, I like both actresses …but Betty was supposed to be a smart character and I can see how smart she was through Jennifer. Liv can only portrayed miserable little daddy’s girl. No smartness seemed to radiate from her face. Sorry Liv.

For the story…yeah, you know…typical superheroes story. What else can I expect? But I can picture myself seeing the movie again and again, of course in TV. 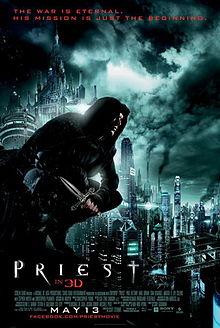 Story: It was based on Korean comic book by Min-Woo Hyung. It was about a world where there was always be Humans and Vampires. Vampires was blessed with great power and  human was blessed with the sun. However,the vampires seemed to show better fight against human.

The Church created super elite warrior called Priest to fight the vampires. They won the war and built a guarded city. All the priests were disbanded. No one knew that one of the ex-priest had turned into human-vampire that can walk under the sun. He kidnapped Paul Bettany’s character’s niece and killed his brother and sister-in-law.

He went to save the girl with the girl’s boyfriend. His act had abandoned the church order.

Hehehe…as I have already said before in my post about Actors I will Always Watch No Matter How Crappy The Movie, I will always watch movies with Paul Bettany in it…that’s why I watch this movie 🙂

Paul Bettany was looking very hot in this movie…as he always did in any movie where he had to play as a tough hero. Love seeing him in it. However, the story itself was nothing special (at least way better than Legion, where he also played as tough angel-hero). It was quite cliché, we can predict what was going on in the story without having to see the whole movie. The way the enemy died was also very quick and not interesting.

What I like about the movie was the fighting scene…what can I say, I love action…especially with good looking actor doing great martial art.

(mostly because of Paul)

Story: Dr. Martin Harris came to Berlin to attend a seminar but he got more than that.

When he went back  to the airport to take his forgotten suitcase, he was caught in an accident that made him lie down in coma for four days. He woke up with an amnesia. he remembered bits of information about him but not the whole thing. It was a shock when he finally met his wife who claimed he was not her husband.

He tried to unsolved the mystery and found out who he really is.

I like the action but there”s nothing special about it. Nothing that can make me feel awed by it. I still enjoy looking at this handsome old Irishman but that”sjust how much I like the movie.

I have just received Mononoke  Hime by Marc of Go, See, Talk. Looking forward to seeing it and writing my review (I have seen it before but seeing it again never hurt)…in one post alone as I never shared Ghibli with other movies. どうもありがとうございました Marc 🙂