I haven’t done this musing post since February 2011 where I talked about the disaster created  by Indonesian  government toward us movie lovers.

Now, I want to muse on books by my number one author,the author who hasn’t disappoint me yet.

As you can see on my side widget, I am currently reading Hearts in Atlantis by the great Mr. Stephen King. I have been a big fan of his works since college…but I finally had chance to continue reading his works after college…that’s why I am still far behind in reading all his works. 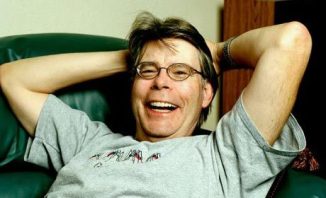 Yes….my favorite author is the king of horror, Stephen King. A lot of people tend to look him with one eye and even avoid his works…I don’t care of whatever those people think, for me he remains as one author who hasn’t failed me yet. I know that his works are not always at his best but the best of  him made me forgot all his not so good books. I still haven’t found his bad books yet.

Stephen King is not only writing horror stuffs, some are books with a lot of heart in  it like Green Mile and Different Seasons. Even the horror ones are not always about scaring  people, such as The Stand and Under The Dome…there are a lot of human emotion in it.

My goal is to read ALL HIS WORKS…and here I am counting down the number  of books I can read  in the future. I also want to reread some of them.

There are times when I haven’t  read the book but already watched the movie. I am going to categorized his works based on colors.

According to another big fan of the great Mr.King (see the comments By TF), I am missing some books here, they are:

…..well well…it seems that i still have plenty reading material  from him 😉

45books are  waiting to be read. I don’t know  how long I will finish them all, one thing for sure I am going to enjoy them  one by one without feeling any rush.

Updated on May 2012: See this amazing post called Stephen King #1 Fans by Jamie Helton @ Film Verse. He did an amazing list of all things related to SK’s movies.

So…have you read SK’s books? Which one do you recommend me to read after Blaze and The Plant? Please Share it with me.