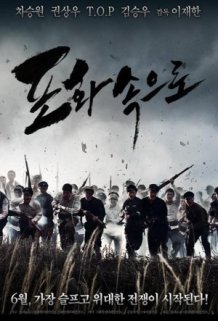 On August 11th, 1950, 71 boy soldiers of the South Korean army singlehandedly held back the elite North Korean 766 Commando Brigade for a full 11 hours. Most were still in their school uniforms and had only fired a single bullet in training!

Their astonishing bravery under fire enabled allied forces to hold a strategic bridgehead at the Nakdong River and gain a tactical advantage that would help turn the tide of the entire war. Nothing less than the freedom of their nation was at stake. Their ingenuity, tenacity and brotherhood helped them to achieve the impossible.

This is their remarkable true story…

I read that quote, which is also the blurb (we call it blurb if it was a book, I honestly don’t know what you call it in DVD) on the back cover of the DVD, from Caroline’s second blog called All About War Movies. She was hosting a giveaway event for the DVD. Too bad not many people came joining this fun and free event even though I have helped spreading the word by twitting it. I won one out of 2 DVD given for this give-away event. It arrived 10 days ago and finally had time to watch it last weekend.

…and here is my thought about the movie.

First of all…a big thank you shout to Caroline and CineAsia for giving me the opportunity to see this movie.

The blurb has pretty much summarize the story of this movie. It started with a battle not far from Pohang, it showed a student soldier named Oh Jung-Bum (T.O.P) running here and there carrying lots of ammunitions. When he was in a very tight situation, he couldn’t help the ranking officer from being killed by one of North Korean soldiers, he was too afraid to even put a single bullet into his riffle. He felt sorry toward the officer and stayed close to him till he died in the medical room in Pohang Girls’ Middle School.

This first battle scene between North Korean army and South Korean army was really well done, it was as if seeing a movie made by Hollywood. However, I was a bit annoyed with a scene that reminded me so much of my all time favorite war movie, Saving Private Ryan. Oh Jung Bum was crouching in fright on a stair was so similar with Upham in SPR. Other than that scene, the battle was great. I enjoy it a lot. 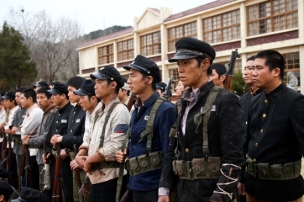 South Korean army was retreating to Pohang school to tend their wounded soldiers. Not long after that, a truck full of student soldiers arrived at the school. These soldiers were school students who volunteered to take part in protecting their country. At the same time, an order came to move all South Korean army to Nakdong River, they were sort of short in hand against the attack of North Korean. Captain Kang Suk-Dae (Kim Seung-woo) (I forgot his rank…is it captain?  Please let me know) entrusted Pohang School to 71 Student soldiers, he lifted their spirit by questioning them were they student soldiers or soldiers? He appointed Oh Jung Bum as their captain because unlike other students, he had seen the combat. He had to be a reliable leader despite the fact that some students were against him.

I like the conflict that happened between the students, but I felt a bit hard to believe in the sudden change of oh Jung Bum personality. He  changed from a chicken to a lion within one day. It would be much better, at least to me, if he wasn’t such a coward in the beginning. 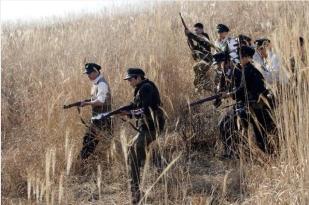 Throughout the movie, I kept wondering whether Korea has young actors or not. The reason is quite simple, tome all those students (except one) looked much much older than 15-17 year old boys, and some even looked like in their thirties. I am Asian, so I am fully aware how teenager looked like in my part of the world. They should have chosen younger actors…or least old actor with baby face look.

There was also another scene that I found a bit peculiar, a little North Korean boy was aiming an automatic rifle toward Oh Jung Bum and his friend. Why peculiar? North Korean was the aggressor, how could they take such small boy to join their army troop? That was just TOO ridiculous. It’s a different story if the boy was South Korean because age was not a big deal when people were defending their country.

Let’s get back to the movie…

Those students faced real problem when the North Korean 766 Commando Brigade came to the school. They tried to survive through the massive attack by North Korean while waiting for help to come.

One of my favorite scenes was when Oh Jung Bum was encouraging his friends to take a stand to protect their country, he was shouting ‘Student soldier or soldier?’ and everyone was shouting ‘soldier!’

The battle in Pohang was really great, every scene in this battle was such eye candy, I love every moment of it. We can see the action and the emotion built up inside the students’ heart. 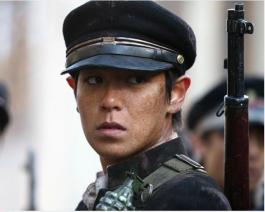 Now, this might come out as a spoiler, but I really have to point out what I like the most about this movie, it was the fact that they didn’t try to make those kids were above the North Korean army, they didn’t wipe out  the entire army…in other word, they are not Rambo-like. I really appreciate this kind of war movie, a war movie with fact and heart.

Despite all the deficiencies (including the so so performance by the leading actor, the boy-band member T.O.P), I still consider this movie as a great war movie and I can see myself watching it again in the future.

I wonder how the North Korean react toward this movie 😉

Have you seen this movie? Please share your thought with me.