I have been planning to write this kind of post since last year but I have to postpone the idea due to my tribute to the band. Last year, I dedicate my blog for a series of tribute for my all time number 1 band in the world, L’Arc~en~Ciel (Laruku)…now that the tribute is over, I’m going to start writing this Best Live Series 🙂 いまから 一生懸命 頑張ります

What is Best Live Series?

Laruku has been around for 20 years now; it means they have been doing a lot of live performances over those years. Just like most bands in this world, they were singing the same songs over and over again. However, Even though the songs were the same, the performances were never the same, there was always something different. This Best Live Series is about choosing the best performance for the same song.

The first song I want to talk about in this Best Live Series is あなた( Read: Anata – Meaning:  You)

Excerpt from my review of Heart (Anata is the closing song in Laruku’s 5th album, Heart)

I want this song to be included in my wedding song!! The lyric is so lovely. Anata is a very beautiful song and the most perfect song to end a concert. Whenever they used this song as a closing song, we can feel how the air in stadium changes when Hyde lets the audience sings the chorus…I haven’t watched them LIVE yet, I only see them singing this song through DVD and even so, I can fell the changes in the atmosphere…I know I will definitely cry if I ever watched them LIVE singing this song. Listening to this song always gives me an awed chill.

Laruku always did excellent performance whenever they sang あなた , the song always reached the deepest part of my heart.  This beautiful song is always accompanied with great stage atmosphere. It is really hard to pick just 1 best performance of this song.

I could finally narrow it to 3 performances for different reasons….but still I have to choose just 1 performance.

I really like their performance in Paris (2008)…it was not the best performance but the way the audience reacted toward the song was priceless.  It amazed me and gave me chill when I heard all those European remembered the lyric and sang along with the band, and it touched me when some of the audience cried over the song (I would have reacted the same way if I ever had a chance to see them Live in front of me).

There are 2 videos of Anata from  Paris,one is for the DVD and the other fis or documentary in NHK. What I can find in youtube is only for the DVD, I couldn’t find the one for NHK. The video for NHK has better view on the crying audience. In the video above, you can see someone cried in minute 3.11.

I also like their ‘come-back’ performance in Shibuya 7 Days (2003) . All the audiences were given blue fluorescence light. When they started singing あなた , the light in the dome was turned off and the audiences used their fluorescence light to lighten the dome. It looked AMAZING!! It was like seeing thousands of star covering the band while they sang あなた . It was such a brilliant idea. However, Hyde’s voice was not as his best…then again, what can you expect from someone who had been singing for 7 days?

Finally, here is my number 1 performance of あなた :

Their best performance of あなた is from Heart ni Hi wo Tsukero! (ハートに火をつけろ！) (1998). I really love this performance because they used real orchestra and Hyde’s voice was at his best. The audience sang gracefully. It was really beautiful! I love every second of this performance. 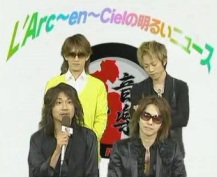 How I wish I can be there!!! Great concept for the 20th anniversary, I know the stage will also be amazing.