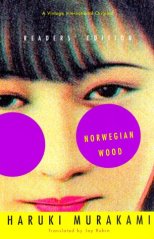 Before I picked up this book, I have read so many good reviews on Norwegian Wood. I wanted to read it since few years back but somehow my hand always drawn by Murakami’s other books. I finally set my mind to read it after the movie was released. Unfortunately, after reading the book, I don’t share the same opinion as other people who had read the book. There are a lot of people in goodreads and blogosphere that think that NW is a really great book and some even considered it as an amazing book. As for me, I wasn’t impressed by it at all.

Norwegian Wood can be considered as love story, and this is my second Murakami’s love story. I was often asked what kind of books I usually read, and I always answer anything but romance. Romance always bored me to death, I can watch romance but I could never read romance. For me, there is not enough imagination in romance.  I thought if the love story is written by my favorite author, I could love it…but after 2 books (the first was South of The Border West of The Sun) that mostly talk about love, I came to a conclusion that even Murakami cannot make me enjoy love story to the fullest…at least I managed to finish it 🙂

I love Murakami’s surreal world/story far better than this. Kafka on The Shore, Sputnik Sweetheart and Dance Dance Dance were 3 books that I love so much.  Although love also involved in those books, but the world they were living in was intertwine in a bizarre and interesting way.

Norwegian Wood is said to be not just love story…I agree with that notion, that’s why I can still finish the book. But, it left nothing special in me. When it ends, it ended without leaving a trace inside my heart, unlike Murakami’s other books.

There are too many sex scenes and sex talks that made me get a feeling that sex is everything. I don’t mind sex scenes in book when it is necessary, but NW used it a lot and at certain point, it annoyed me. You might think that I am weird or too strict or whatever…be as it is, I don’t mind. I think there are more to talk about than sex. At the last pages, when Reiko and Watanabe were doing it, I literally said “WTH, again?”

The story is about Toru Watanabe. He was remembering the time when he was still young, before he was 20. When he was still in school, he used to hang out with Kizuki and Naoko (Kizuki’s girlfriend). Their group separated after Kizuki killed himself. A year later, Watanabe met Naoko and they started going out together. On Naoko’s 20th birthday, they ended up sleeping together. To his surprised, Naoko disappeared the next day. He was left feeling so confused.

Watanabe finally found out that Naoko was in some mental institution. When he visited her, he met her roommate, Reiko. Reiko had been there for 7 years. Naoko’s health was getting worse after Watanabe’s visit. Meanwhile, despite the fact that Watanabe said he will wait for Naoko, he fell in love with his eccentric classmate, Midori.

Although I didn’t enjoy the story and think that both main characters are not interesting, but I really like the supporting characters. My favorite of all was Nasagawa. He had a snob way of looking at the world, always looked down on other people. He cheated on his girlfriend by sleeping with a lot of girls. He was the most annoying character in this book but he was also the most interesting one. He made the book more lively and enjoyable. I also liked reading about Reiko’s past, in truth I enjoyed reading her past life way more than Watanabe and Naoko’s life. Her story kept me glued and wandering what had happened to her. There was time when I wanted to skip the pages when Reiko said her story was to be continued. Reading about Midori was also interesting, she was so carefree and fun to read.