After a whole year of reviewing each Laruku’s album, patiently writing about it per month with or without any people reading it….I finally reach the last album, KISS, the last before they released their newest one this year. I’m impatiently waiting for that new one to be released.

Unlike most bands I like, Laruku keeps on making better and better album as they get older. KISS is one of their best albums. KISS is an amazing record as it full of emotional songs. The first time I heard it, I was blown away, they went back to their original root. KISS sounds like Dune (their 1st album) with a touch of their new style of music. Each songs has its own sounds that differs it from the other song, they sounds more complicated and deeper than before. It didn’t take a second replay to fall in love completely to this album. 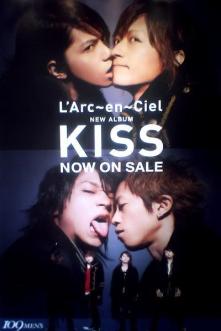 This album was released in November 21, 2007 (3 long years ago, God how I miss them so much. Dear L’Arc~en~Ciel, please don’t delay your new album any longer!!). I have reviewed the album a day before it was officially released because I downloaded it before I bought it, I couldn’t wait for my order to arrive 2 weeks later. But, the review was in my native language.

There are 5 singles and 5 PVs (promotional Video) for this album. Link was released right after AWAKE, they even included Link in their Awake Tour. Then, they released Seventh Heaven, My Heart Draws a Dream, Daybreak’s Bell (also used as an opening song for Gundam animation), and Hurry Xmas. KISS also has a very interesting promotion poster 😉

Now, let’s talk about the songs:

Lyric and music by Hyde
When I first heard this song, I honestly couldn’t understand it…it didn’t feel like Laruku’s song. After I listen to it for the 3rd time, I totally could understand the mood of the song. Every time I listen to this song, my body feels like it has its own mind as it starts moving following the tune of the song. The PV is AWESOME!! I like it so much. I vote it as my 2nd best PV by Laruku (I’ve made a post about Laruku’s Top-5 PV before). The PV makes me love the song more than before.

Lyric and Music by Ken
This song is opened with a fun drum beat that straight away gives impression that the song is a fun song. I like this song the moment I heard it because it sounds like old school rock with Laruku’s touch. For me, the guitar and the drum overshadowed the other instruments. Pretty girl becomes more cheerful during their live performance.

My Heart Draws a Dream

Lyric by Hyde, music by Ken
This song is SO laruku, anyone who ever heard of Laruku’s songs will immediately know that My Heart Draws a Dream in another Laruku’s song. I love how Hyde makes the crowd sing ‘Yume wo egaku yo’, it gives stronger feeling to the song. The PV is as beautiful as the song. Liking this song is very easy.

Lyric and Music by Tetsu
Sunadokei means sand clock. It started slow but picked its beat up gradually. The bass is so thick, even before I knew who the writer is I could already guess that this song is SO Tetsu. When I finally received my CD, I wasn’t surprise at all seeing the writer of this song.

Lyric and music by Yukihiro
The first time I heard Spiral, I thought it was Hyde’s song because it sounds like the kind of song from Hyde’s 3rd album, Faith…but I was wrong, it is written by Yukihiro. It is not an easy song to like (Just like most of Yuki’s songs), it’s easy for me to like it because I am so used to their songs.

Lyric by Hyde, music by Ken
In my ears, Alone en Lavida has Spanish sound which is kinda new in Laruku’s music. The guitar solo sounds like one of Santana’s music, I called it as Kentana. I like the string in the last part of the song, it gives more dramatic sound.

Lyric by Hyde, music by Ken
Whuaaa I love this song!! Love it so much! This song is the perfect combination of their old style with their new style of music. I feel like listening to songs from Dune done in a new way, it’s like mixing the Sakura era with Yukihiro era. I like everything about this song, Hyde’s ups and downs voice, Yuki’s harmonic drum, Tetchan’s difficult Bass and Ken’s melodic guitar. I have so much love for this song.

Lyric by Hyde, music by Tetsu
This might sound a bit weird, but this is my honest feeling, when I first heard Umibe I felt like listening to Lunasea’s song…it felt like the kind of ballads made by that band. I like the live version of this song more than the recorded one because it is more powerful. My favorite part of this song is when Hyde sings alone, it sounds so deep.

Lyric and music by Hyde
The song starts with a piano that getting faster and faster. I could feel the same aura as Hyde’s solo album, Faith…but of course this song has better drum beat than most Faith’s songs. I really like the way Yuki hits his drum and the string that follows the beat makes stronger impression on the song. I consider it as an elegant rock.

Chase faster, Abakidashita shunkan ni me wo fusagare
End that bastard, Yaminihisomu no wa dare?
Ashimoto ni chirabaru the black roses,
But who’s the next target?

Lyric by Hyde, music by Tetsu
Love and love and love this song! It’s the kind of love at the first sight.  I love it so much, I have been using this song as my mobile phone’s ringtone for over a year now…and even so, I still enjoy letting it ring until the song almost ends before I pick up the phone. I never get tired of this song. This might sound silly, but it’s true, I often jump along when I watch the concert (in DVD). When I see a cover band singing this song, I always get so excited. Link is a super fun song that can always cheer my bad days.

Liric by Hyde, music by Ken
I LOVE THIS SONG!!! I fell deeply in love with this song since I heard it for the first time. Everything about this song is perfect, Hyde’s voice is brilliant, the beat and the string are perfectly matched, it gives a strong feeling of sadness and loneliness. In the refrain part, when Hyde sings in falsetto…that is the saddest part of the song. I almost cry the first time I heard it, somehow it tore my heart into pieces. When I finally saw it live in Theater of Kiss, I couldn’t help not to shed a tear. The lyric itself is actually not as sad as the music.

Here is the beautiful performance that makes my tear fell down.

Lyric and music by Hyde
Hurry Xmas reminds me so much of an old song but I couldn’t put my head together to remember which song it was. It is a fun song with old happy jazzy sound. I like this new tune, ‘new’ in laruku’s song, it gives a new level toward the variety of their songs. A friend of mine thinks that this is the best song in this album, tho I don’t share the same feeling but I think this is one of the best songs in this album. I read somewhere, an interview with Hyde, he said that he is not a Christian but he likes the idea of Christianity.

I could figure out most of the song’s writer before I received my CD, being a fan for 6 years really makes my ear getting used to each member’s way of writing songs. This ability of guessing which song belongs to who is owned by most Laruku’s fans that I know of. I couldn’t quite explain it how I know it, I just know that this song is so Tetchan or so Hyde or so ken or so Yukihiro.

This post is the last post of my tribute to L’Arc~en~Ciel as a pre-celebration year of 20th L’Anniversary and my 10th anniversary as a Cieler, 2010 was my 9th anniversary as a Cieler and now it’s already 2011 which means I have entered  the 10th year of loving L’Arc~en~Ciel. Laruku an shieru might not be the best band in the world in term of musicality but they have been the best band in my heart for the past 9 years and I haven’t see any sign that will make me love then less in the future.