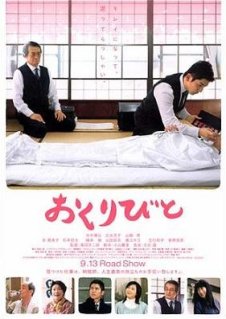 That was my first impression after watching Okuribito (Departures). I once watch Six Feet Under which is a US TV series about the life of people who runs a funeral house, but I found that series as boring and has no heart at all. With the same theme, Okuribito managed to deliver EVERYTHING…the laugh, the sadness, the beautiful art of sending the dead to the next life, and most of all the heartbreaking moment that everyone must face sometime in this lifetime.

Okuribito was directed by Takito Youjiro. It tells the story of a man named Kobayashi Daigo (Motoki Masashiro) whose dream was to become a professional a cello player but his dream was shattered when the orchestra was disbanded. Along with his wife, they moved from Tokyo to Yamagata. He got the first job he applied in that small town, he was sort of tricked into it. The ad said it was a job dealing with journey…but the journey turned out to be a journey to the next life.

The company’s name was NK エージェント (NK Agent) as NK stood for Noukan (encoffining). Shachou (the director) was a nice man that was quite eccentric in his own way. Sasaki Ikuhei (Yamazaki Tsutomu) had been working as Noukanjin (encoffiner) for the past 9 years. His first customer was his own wife.

In the beginning, I have a lot of laugh because Daigo was not used to his new job and to make matter worst, his first dead body was a woman who was dead for 2 weeks and already smell so bad. He started having second thought about his job. He didn’t tell his wife, Kobayashi Mika (Hirosue Ryoko) about his new job because it was considered as a shameful job.

Daigo had a change of heart when he saw how beautiful the art of dressing the dead was. I fact, I myself was also impressed. All this years of loving all things Japanese, I never knew that the way they dressed the dead was as beautiful as other Japanese arts.

To revive a cold body and grant eternal beauty. It was calm and precise. And more than anything, it was filled with affection. To be present at the last farewell, and send off the deceased. It was tranquil, and every action seemed elegant.

Daigo came to love his job even though his old friend looked down on him. He even defended his job when Mika told him that she will go back to her parents unless he quitted his job. When he almost quitted his job, Sasaki-san told him that he shouldn’t see the job as taking advantage of the dead but it was more like daily life as we all live by eating the dead (dead fish, dead chicken, etc)

Out of expectation, Mika came back and told him that she was pregnant. She asked him again to quit his job, otherwise their kid will be いじめ の 対象 になる – ijime no taishou ni naru (bullied) by other kids. However, Mika had a change of heart too once she saw Daigo performing the art on a woman she knew. She even proudly said “夫 は のうかん人 なん です – Otto wa Noukanjin nan desu” (my husband is an encoffiner) when Daigo was furious seeing the men who treated his father’s dead body carelessly. Daigo hated his father so bad because he abandoned him and his mother when he was six…but when he performed the ceremony by himself, he slowly forgave his father.

I spent a lot of tissue papers while watching this movie. The ceremony, although beautiful as it may seems, it is still a heart breaking moment. In every ceremony this movie showed, I couldn’t stop my tears from falling down. Death is truly the saddest thing in this world, especially when the deceased is the one we love the most. Japanese are really good in making sad scene that feels so natural…they don’t need overflowing tears to make the scene as heartbreaking as possible.

Okuribito touches my heart so deep because it delivers death in a beautiful way. The scoring is also perfect, it gives power to every moment in this movie. It gives more reasons to admire Joe Hisashi, one of the most brilliant music composers in this world. Watching this movie was an amazing 2 hours journey. It impressed me so much, I wrote this review the second I finished watching it.

I didn’t know that Japanese shared the same premonition like Indonesian, we both believe that when someone is about to die, that person some how knows that their time on earth is soon be ending. That person will say something to someone else that sort of giving clue that he/she is about to depart to the next life.

I will definitely watch this movie again in the future. It’s no wonder that Okuribito won so many awards including the 81st Academy awards for an academy for best foreign film. It is impossible not to give this movie a

Because this is a new Japanese traditional that I found this month, as well as a new movie I’ve seen this month, I’m including this review for my Hello Japan! Mini Challenge for January.

Death doesn’t mean the end, but leaving the present, heading for the next stage. Truly a gateway. As a gatekeeper, I’ve sent many people while saying “Have a nice trip and see you again”