I have just seen a marvelous miniseries, I am still mesmerized by it. 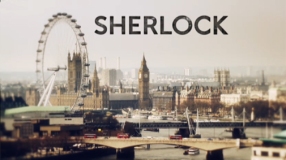 A British mini series about Sherlock Holmes but it was made in modern world. It totally intrigued me because it was exactly how I imagine if Sherlock ever live in this time. Remember Robert Downey’s version of Sherlock Holmes? I like Downey but I haven’t seen the movie because all my brain’s nerves are screaming ‘That’s not Sherlock!!’ just by looking at the trailer.

As for Sherlock, I haven’t seen any trailer yet and my friend lent me this mini-series few days ago. I was curious but couldn’t see it till weekend. The minute I saw Sherlock I knew straight away that HE IS A BETTER SHERLOCK than anyone I have ever seen. In fact, he is the most perfect Sherlock Holmes that represents how I imagine Sherlock  whenever I  read the book. He is annoying, obnoxious, a pain in the butt, rude, self-absorbed, cold, & arrogant smart ass. He ignores women. And last but not least, he is annoying…ow, I’ve said that already! However pain in the butt he is…I LOVE THAT MAN!!!

Benedict Cumberbatch is Sherlock Holmes!! He is brilliant!! I wonder how he can memorize all that lines, he speaks without stopping and the lines are so complicated. I love listening to his voice, his deep and sexy voice makes all his deductions sound interesting to hear….well they are interesting but his deep voice make it more interesting.

Not that I don’t like Martin Freeman as Dr. John Watson, but I have to admit that it took time for me to accept him as Dr. Watson. He was not how I imagine Dr. Watson would be but somewhere along the line I grew to like him more and more. Martin Freeman’s version of Watson is a perfect accessory to accompany the oddity of Sherlock.

Now, let’s talk about the story. 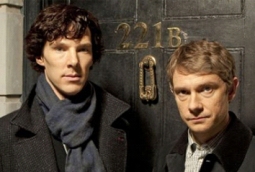 In this 1st episode, it highlighted more on Dr. Watson rather than Holmes. Watson was having problem accepting his retirement from war. He met a friend who introduced him to Holmes. Watson felt so annoyed with Holmes, he started analyzing Watson and said everything about him. I could understand Watson’s feeling because it will annoy me too if I was in his position. But despite his annoyance, Watson still came to Holmes’s house to consider being his Flat-mate. As soon as Watson stepped into Holmes’s house at 221B Baker Street, he was dragged into Holmes unusual way of thinking. The more he tried to avoid him the more he was drawn into him.

The case in this first episode is about a series of suicide. Holmes believed that it wasn’t a suicide, he was so sure that all those suicide was done by a killer. The first lead came from the fourth victim, she left a message. From that message, Holmes developed a series of deduction. I’m not going to share the story more than this because it would spoil the fun. It’s a mystery mini series after all 🙂

The reason I like this mini series so much is because the adaptation to modern life was perfect. An introvert person would indeed love texting more than calling. And I found my self laughing so loud now and then because of its hilarious moment and Sherlock’s sarcastic words.

I am 100% sure that my amazement toward this movie is because of Benedict Cumberbatch’s brilliant act, he has this straight face that I always imagine every time I read (or re-read) Sherlock Holmes books. In fact, He made me want to read the books again. His posture is also the way I imagine Holmes would be.

I want to watch the rest of the episodes as soon as I finished this episode. Unfortunately, the file my friend lent me is broken 😦 I’m now trying to download it myself, I couldn’t  wait for another meeting with my friend which can never be guessed when will it be.

Before you say anything!! Yes I download the movie…there’s nothing I can do but doing a piracy. The reason is so simple, the original is not available for sale (well, at least not here) and ordering from Amazon is also out of the question.

One of my favorite quotes from this episode 🙂

Sherlock: “Shut up”
Lestrade: “I wasn’t saying anything”
Sherlock: “you were thinking, its annoying”

The next episodes are The Blind Banker and The Great game. I want to watch it A.S.A.P!!

My rating: without any slightest doubt,

Details on the miniseries:

8 thoughts on “Sherlock – A study in Pink”