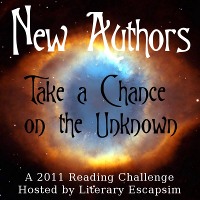 New Author Challenge is a challenge that ‘forces’ us to read at least 15 new authors. ‘New’ here means new to us. I used to read only by authors I have known well because new authors are like gambling, I might get good book and might get terrible book. To save myself from trouble, I rather read those from the ones I’ve known. But, as I get older I know better, gambling is better than getting stuck with few authors for the rest of my life.

Last year, I stumbled upon this interesting challenge. I forced myself to finish this challenge because it’s really good to keep on trying new authors every year. I will definitely join this challenge again next year.

The New Authors Challenge 2011 sign up post has already been posted but it won’t start until next year. Just like last year,  The challenge is kindly hosted by Literary Escapism. This post is my introduction/sign in post as well as my wrap-up post for New Authors in 2010. Last year, I have read 15 new-to-me authors. This year, I’m planning to do the same.

The rules are still same with last year

This year, I have already had 8 new authors on my shelf, they are:

This list is going to be longer because I didn’t mention new-to-me Japanese authors that I will borrow from JF Library. Last year, I read 8 new-to-me authors from Japan. This year might be less because I’m planning to reduce my TBR as much as I can before borrowing or buying more books …well, borrowing will be a bit difficult to control 😉 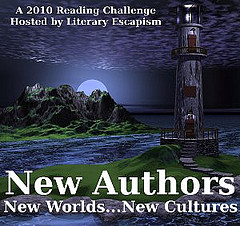 I managed to read 15 new-to-me authors and I love some of them and looking forward to read more by those authors. Most of my new authors are Japanese authors because I borrowed them from Japan Foundation Library.

Taichi Yamada writes a book titled Strangers, it is about a man who met his dead parents’ ghost. Yasutaka Tsutsui writes his version of life after dead in his book titled Hell. Kenzo Kitakata tells us the story of a man who has left the dark side of the world just to get back to that world again in Cage. Trinity is an Indonesian backpacker who shares her experience through her book, The Naked Traveler. My first Shusaku Endo’s book is called Deep River where he tells us about journey taken by some Japanese in India.

Kakizaki Masasumi is a mangaka whose illustration is one of the best shares his version of Pandemic caused by a mutated virus that almost wiped out half Japan population. Takashi Atoda writes amazing short stories in The Square Persimmon. I finally managed to get my hand on Joe Hill ‘s book, he talks about the life of a old rocker who was chased by a ghost in Heart-Shaped Box. I love The X Files more than any TV series ever created in this life time, and it is fair for me to read the books based on the movie. Max Allan Collins has done a great job in novelizing The X Files – I Want To Believe. My first Ed McBain is a book titled Alice in Jeopardy where he tells us the story about a woman named Alice whose children were kidnapped by someone.

Because of Cillian Murphy’s recommendation, I finally read Cormac McCarthy’s post-apocalyptic book, The Road. Yoshiki Tonogai is my second new mangaka in 2010, he writes a great story about a game that took the life of people who had lied at least once in their life in Doubt. Soji Shimada writes an amazing story about two detectives trying to solve a case of bizarre serial murders that happened 30 years ago in The Tokyo Zodiac Murders. I searched for John Saul’s book because some one told me that his books are as horror as Stephen King, I read The Manhattan Hunt Club which is last thrilling than I expected. My last new author in 2010 is Lensey Namioka, she tells us the story of 2 ronin who tried to save a castle from the wrong people in White Serpent Castle.

Those are the new authors I read this year…it was a great fun reading their books. Out of all those 15 books by 15 different authors, my favorites are The Square Persimmon by Takeshia Atoda and The Tokyo Zodiac Murders by Soji Shimada. Book from both of those authors had successfully made me want to read more books by them.

So…how many new authors did you read this year? And who is your favorite? And how many will you read in 2011?