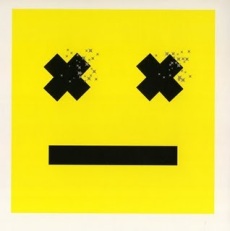 Smile is an album that I considered as a long awaited album. Real was released in August 30, 2000; they held a lot of concerts during the year. Somewhere in 2001, everyone started getting busy with their individual works. Somewhere in 2001, I discovered this amazing band. People told me that I was a bit late because they have already disbanded the band. It was such a devastating-news for a new devoted fan like me.

Fortunately, somewhere in 2003, good news reached my ears. They were getting back together again to record a new album. Their solo projects were merely their way of having a break after being together for so long.

In March 31, 2004; they finally released their 9th album, SMILE. Smile came out in limited editions. I was lucky to get my hand on one of those limited editions. The Limited editions consist of 1 CD and 1 DVD, the CD is colored yellow while the DVD is colored pink. The DVD is showing the making of the album plus their 1st performance singing their 1st single from SMILE. It was really funny seeing Hyde forgot the lyric. 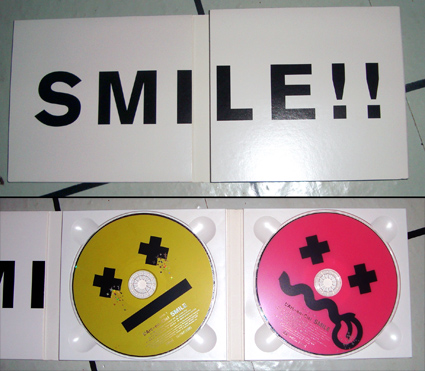 There are 3 singles from this album, Spirit dream Inside (used for Final Fantasy’s soundtrack), Ready Steady Go and Hitomi no Juunin. Hitomi no juunin’s video is one of my favorite all time videos by Laruku. You can see the video in page 2.

Although SMILE is the album that lift Laruku’s name in the world (after the released of this album, they had their first US concert), but for me, this album is not the best from them, it could even be in my top 3 not-so good albums by Laruku (I couldn’t say worst album because in my heart and ear there is no such word as worst in Laruku). This album lacks of variations and depth. It is a fun album, but not as fun as the others.

Now, let’s talk about the songs 🙂

Lyric by Hyde, Music by Ken
Seppun is a very loveable song. The moment I heard it, I like it instantly. Ken has this talent to make a loveable tune. The way Hyde sings it is also beautiful. The song is magically enchanted anyone who listens to it. I never get tired of listening to Seppun.

Lyric by Hyde, Music by Tetsu
The most ear-catching song in SMILE and the most played song in Japanese events. There was moment where I got so bored with this song because it was played all the time by cover band, tho I never get bored listening to the original one. The prominent sound in this song is definitely the sound of the drum. Yuki-Nichan did a really good job for this song.

Lyric & Music by Ken
There’s nothing special about this song, but I really like the sound of the drum mixed together with the bass. The percussion is also interesting to hear. Although this is Ken’s song but his guitar is not as fun as listening to yuki’s drum beat and tetsu’s bass.

Lyric by Hyde, Music by Ken
A very fun song!! That’s all I can say about Feeling Fine. This song can easily cheer my heart when I’m feeling down. It sounds like the kind of music Tetsu usually made, I was a bit surprise when I knew Ken is the one who made this song.

Lyric & Music by Tetsu
I love this song! I’m glad they let us see their live performance of this song in their DVD. The song really touches my heart. I love everything about it, the sound of all the instruments and Hyde’s voice mixed beautifully. The live performance is perfect, Hyde wearing white suit and ken using acoustic guitar…it gives more depth to the song.

Lyric by Hyde, Music by Ken
Coming Closer is not an easy song to love, but I really like this song…the reason is very simple, Yuki is great in this song, especially in minute 2.50-3.12.

Lyric & Music by Hyde
Eien means eternity. When I read the lyric, I think it is about love. On contrary to Hitomi no juunin, this one is what I like to call as Lovers’ love. The song is a bit difficult to like, it took several time listening to it to make me started liking it. Although the music is not easily likeable, but I really like the way Hyde sings it, it sounds like a lullaby.

Lyric by Hyde, Music by Yukihiro
Huaaaa….I WANT TO SEE THIS SONG LIVE IN FRONT OF ME!! Revelation is in my top list songs that I really want to see in their ccooncert, I want to jump and shout along. I love this song from the moment I heard it, and I straight away knew whose song is this, this powerful song belongs to my favorite member, Yukihiro 🙂
The aura whenever they played this song was terrific, everyone jumps, everyone shouts, I want to feel that atmosphere too. If they finally come to Indonesia and will sing based on request, Revelation will be my choice.

Lyric by Hyde, Music by Tetsu
Hitomi no Juunin literally means someone who lives in my eyes, but I think ‘The apple of my eyes’ is more precise. I’ve translated this song because it sounds really beautiful. My interpretation might be different compare to other people, I really think that this song is written for Hyde’s child. The lyric is a beautiful love beyond lovers’ love. I really like this song and it never makes me bored. I couldn’t stop sing-a-long whenever I heard this song. The most beautiful song in SMILE

Lyric & Music by Hyde
There are 22 versions of Spirit Dream Inside, the 1st one is the English version and it was used for Final Fantasy’s soundtrack. The video was also made with CG and mixed with final fantasy’s characters. In my opinion, the song is not that special. It is fun but nothing special.

Somewhere in the wasteland
I see you smiling at me
A vision out of my dreams
Will everything change?
Take the pain away
Lead me with your light

This is part of my tribute to L’Arc~en~Ciel (See more post by clicking the picture).