I will write my review in 2 languages because I think Andrea Hirata deserves world wide recognition.

This is Andrea Hirata’s 5th book. He had written the tetralogy of Rainbow Troops before this book. Rainbow Troops, the 1st book of his tetralogy, has been translated into English and I’m planning to give the book away on my 1000th post (this review is my 779th post), it’ll be my 1st book giveaway, so if you read this review and curious about his book, wait for my giveaway post 🙂

Here’s an article about Rainbow Troops. 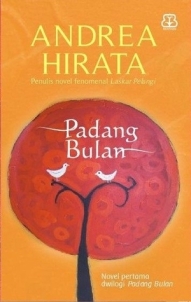 The Field of Moon tells the journey of life of 2 people, a woman named Maryamah who used to be called as Enong and Ikal (a nickname that represent Andrea himself). Enong had to face a tragic life since childhood. Her dream was to be able to speak English fluently, but the faith brought her into different path. She came from a poor family, her father saved up some money to buy her an English dictionary. She was thrilled when she received it and treasured it more than people treasured their gold. Not long after that day, her father passed away, leaving her with her mother and her 3 sisters. She quited from her school but still holding strong to her dream, she worked as hard as she could so that none of her sisters have to leave school like her. She became the first woman who sought for tin in traditional way. This traditional way is called mendulang, I don’t know how to translate it into English.

The story of Ikal was not as tragic as Enong. He was trying to get the woman he loved so much, A Ling from a very handsome man named Zinar. He asked for a help from his best friend, a detective wannabe named M. Nur. His struggles to get his girlfriend back in his arm were full of funny actions. I don’t usually read books about struggle for woman/man’s love but his struggle here is very funny and it made me enjoy reading it. It could make me laugh so hard even though I was reading in the bus full of people. M. Nur was really crazy in his own ways.

Somewhere in between, Ikal and Enong met and their faith crossed each other.

This book is not as deep as Rainbow Troops but still as enjoyable as all his books. What I like the most about him is the way he plays with words. He tries to write all the sentences in a very beautiful sentence. He has unusual personification or comparison between human’s behavior, animal and things. He can exaggerate things without making us feel like it is exaggerate. He spotlights the life of ordinary people in Melayu…and it’s so interesting to read about those ordinary people with their extraordinary life.

To sum it all, after reading The Field of Moon, he still secures his place as my favorite Indonesian Author.

You can read my teaser on this book here.

9 thoughts on “Padang Bulan (The Field of Moon)”