After reading such a chunkster (Under The Dome with its 1074 pages) in the last 3 weeks, I decided to read something short and non-thriller book. I picked up a manga I haven’t read in the last couple of years.

Part of the reason of why I chose to read that Manga is because of my Booking Through Thursday post 2 weeks ago. The question was about book we are too ashamed to tell people that we read it…unfortunately (or is it fortunately) I don’t have that kind of book, I finally chose Manga from a genre I rarely read. I NEVER and AVOID reading romance books because I find it such a waste of time to read thousands of word regarding someone’s journey to find love…however, there are some romance Manga that I like so much. I’m not ashamed of reading those manga, I even recommend it to people around me. 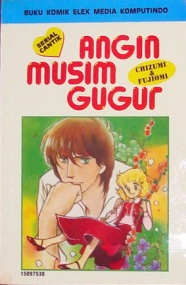 I’m writing this manga review in English because I’m going to include this in my Manga Challenge 2010. I’m not sure if this manga had already been translated to English or not.

After 2 months of reading nothing but thriller for my R.I.P. Challenge, I took out 2 Manga about a couple Named Chizumi and Fujiomi. There 3 manga about them, but I only have 2 books. The ones I own are Haru o Matsukoro (Indonesian translation: Angin Musim Gugur, in English: The Wind of Fall) and Patel Kibun (Pastel Mood). The one that I don’t have is Golden Book.

I will only review The Wind of Fall for now and will soon write my review on Pastel Mood somewhere next week. The Wind of Fall is filled with 6 short stories. There are 5 stories about Chizumi and Fujiomi’s relationship and 1 extra story.

As I already said, I don’t read romance…this manga is an exception because it’s really fun. It’s short but meaningful. Kyoko Hikawa can really make her readers feel relate to her story. I know how careless I am (not as worse as Chizumi but still too careless for normal people), I somehow know how it feels to be in Chizumi’s shoes…but I’m not as weak as her in defending myself from trouble.  Fujiomi is my type of man, quiet but full of care. I find man who likes to talk is good as friend but not as companionship. I guess that’s why I really enjoy this manga

The Wind of Fall 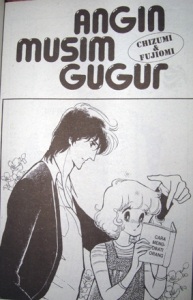 The Wind of Fall consists of 15 pages, a really short story isn’t it? but this 15 pages of story is what drawn me to read the rest of the Manga because I want to know what will happen to this odd couple.

The story takes place while both of them are still in high school, Chizumi Shinohara is still in 1st grade (or 10th grade) and Kou Fujiomi is in 2nd grade (or 11th grade). The super careless Chizumi lose her sister’s hat, that hat is her most treasured item. She lives alone because she doesn’t want to make her older sister worried about her any longer.

The next day, her friends, Miura and Sonobe, tell her that Fujiomi is looking for her and Fujiomi is known as a cold boy who likes to fight with other boys. Chizumi becomes really scared of Fujiomi. When Fujiomi finally find her, he returns her hat without any word. Chizumi feels touched by his action and decides to find him to say thank you. This careless girl is taken by 3 delinquent boys who claim to know Fujiomi. Fortunately Fujiomi finds her and beat the other 3 boys. Fujiomi is furious at Chizumi and shouts at her of being so stupid. Because of that incident she is a bit afraid of him.

Their faith seems to cross each other all the time. A teacher asks Chizumi to help him prints some flyer for school event, he also asks Fujiomi to help her. Chizumi stays as far away as possible from Fujiomi. Fujiomi realizes that she is afraid of him, he tells her not to be afraid off him and he is sorry for shouting at her before. The more she spends time with Fujiomi, the more she realizes that he isn’t as scary as everyone thought. When he shouts at her is because he is concern of her.

Chizumi becomes more interested with him when she sees him smiling because of her stupidity. And somehow, Fujiomi who is always cold with girls starts paying more attention to her.

On the school’s sport day, Fujiomi shows his feeling for her in indirect way that I find really interesting and romantic. Chizumi is participating in a running competition where she has to choose a paper that will tell her what to bring while running. Her paper is telling her to run with her boyfriend. All she can do is stand still and confuse because she doesn’t have a boyfriend. Suddenly, Fujiomi jumps into the track and caries her to the finish line. Everyone in their school is shocked. I will quote their lines:

Chizumi : “ung…Fujiomi, everyone is talking about it”
Fujiomi: “you don’t like it?”
Chizumi: “Not…not at all.” (with a panic expression)
Fujiomi: “Then, let’s ease your sister’s heart” (with a very gentle smile on his face)

After that, Fujiomi says “For now on, I will take care of her” to Chizumi’s older sister.

I really like Fujiomi’s way off showing how much he cares for Chizumi. I always find showing love is more important that saying it. Beside, it’s impossible to see a boy like Fujiomi saying such a cheesy word to the girl he likes.

Once Upon in Spring 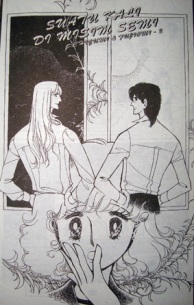 The second story on this manga consists of 23 pages. Chizumi is already in 11th grade and Fujiomi in 12th grade. Fujiomi is usually avoided by girls even though he is very good-looking, but since dating with Chizumi he now has more fans than ever. Girls in school start gossiping her and tells that she is ugly, stupid, careless and don’t even understand what Fujiomi sees in girl like Chizumi. A lot of girls want to be close to him because they think that Fujiomi is not as cold as he seems to be…but for Fujiomi, there is only Chizumi in his heart.

Fujiomi’s brother tells Chizumi that her influence over him is truly amazing. 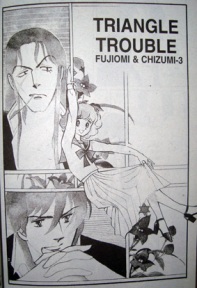 This 39 pages of story is the funniest of all. A boy named Gohoji moved into their school, in the same class as Chizumi. He has to repeat school because he is always fighting. He is supposed too be in the same grade as Fujiomi. He really hates Fujiomi in the sense of competition. He wants to defeat him.

Because of her carelessness, Chizumi has made Gohoji fall down in front of the class. Fujiomi doesn’t worry about that incident because he knows that Gohoji is not the type who will use violent toward everyone. It’s very funny to see Chizumi and Gohoji, especially when she tries to asks Gohoji to join the meeting for their class event (I laugh so hard at these panels).

In the end, Gohoji never has a chance to fight with Fujiomi, he has lost his fighting spirit every time he meets Chizumi. 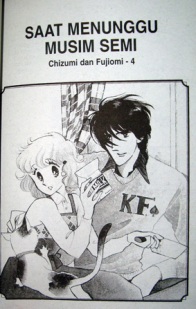 There are 48 pages for this story. This one is really interesting because we got to see the rage in Fujiomi when someone hurts Chizumi.

There is a girl named Itsumi who looks so much like Chizumi, but her personality is so different to Chizumi. She fights back men who tried to touch her breast. She was helped by Fujiomi. After that day, Itsumi falls in love with Fujiomi. Itsumi’s friends also mistook her Chizumi as Itsumi.

One day, Itsumi sees Fujiomi in Ice Skating arena. She comes close to him smiling so happy but for a while she stops smiling when she sees a girl next to Fujiomi with Fujiomi’s arm around her shoulder. After meeting both Chizumi and Fujiomi, Itsumi thinks that those couple looks fun and wondering is she really wants to be with Fujiomi. Meanwhile, Takuya (Itsumi’s childhood friend) thinks that Itsumi is going out with Fujiomi when he sees Fujiomi walking with Chizumi.

On the graduation day, Fujiomi’s teacher takes some of his students, including Fujiomi, to a café where Takuya works. Itsumi joins the group because off Fujiomi. Seeing Itsumi with Fujiomi breaks Takuya’s heart, he tells Itsumi that he like her and tells Fujiomi to take care of her because she is a nice girl. Fujiomi only says “You’re wrong, I have already ha a girlfriend”

At the same time, the men that tried to touch Itsumi’s breast are taking Chizumi to a park to take their revenge, they think Chizumi is Itsumi. When Fujiomi finds out about it, he becomes so furious and beats the hell out of those guys. 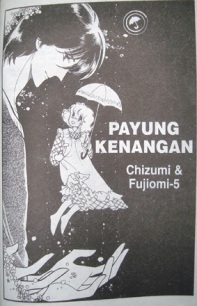 The last story of Fujiomi and Chizumi in this manga consists of 29 pages. This time, Fujiomi is already in college and Chizumi is in 12th grade.

Chizumi meets a beautiful and graceful woman named Kotone. Deep inside, she envies her and wishing that she is more like her than the careless girl she always be. Chizumi doesn’t know that Kotone is a senior in Fujiomi’s college. Kotone likes Fujiomi.

When Fujiomi and Chizumi are dating, Kotone sees them and asks them to come to her brother’s café. Kotone sees how careless Chizumi is and how Fujiomi keeps on helping her around. She feels a bit jealous of her.

Kotone tells Fujiomi that Chizumi seems like a girl who is a bit difficult to handle. Fujiomi simply answers her by saying “even though she is like that, she has a strong heart”. When Chizumi tells Kotone how beautiful and elegant she is, and how much she wants to be like her, Kotone replies her by saying “but, even so, I can never win with you.”

The last story in this manga is not about Chizumi and Fujiomi. The story is sort sci-fi romance. A girl, Misako Nakanishi, who falls in love with a boy, Ikou Tachibana, but the boy has already set his heart on girl that had help her when he was still 7 years old. The boy accidentally traveled through time and save by a girl. The girl who had helped her turns out to be Misako.