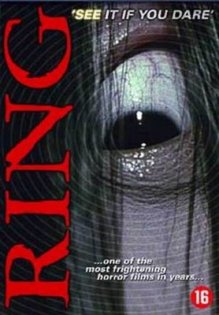 Ringu remains as my number one horror movie since 2000, although it was released in 1998 I had my chance of seeing it in 2000. Ringu is not merely a ghost story with no other intention but scaring people, Ringu has a great and deep story. It is the first movie I’ve seen that deny all cliché which often seen in horror movie.

Ringu is based on a novel by Suzuki Koji with the same title. I found out about this fact few years later. I finally found the book 2 years ago and had reviewed it here. The basic story is the same but the detail is so different. There are a lot of differences between the book and the movie. I love both versions. I have already written about Ringu somewhere in 2005 but it was written in my native language, I decided to rewrite it in English.

The story is about a cursed video that will cause the death of its viewers a week later. Asakawa Reiko (Matsushima Nanako) is a reporter who recently interviewed some teenagers about a cursed video. Few days later she found out that her niece, Tomoko, who died recently might be the victim of that cursed video. From the pictures left by her niece, she found the cottage where Tomoko and her friend used to stay. She also found the video and watched it. Right after the video was over, she received a strange telephone call.

Asakawa was afraid of the curse, she asked her ex-husband, Takayama Ryuji (Sanada Hiroyuki), to help her. Ryuji was a bit different than normal people, he could feel bad aura from around him. He watched the video and asked Asakawa to copy it for him. Together, they found some leads to discover the origin of the video. Unfortunately, Yoichi, their son, saw the video too. He told Reiko that Tomoko told him about the video. Asakawa had to fight the curse not only for her but also for her son.

They finally knew about Sawamura Sadako and her power to kill people. They thought that if they could find Sadako’s body, the cursed will be lifted.  Was the cursed lifted or not is something you have to watch for your self.

The director is Hideo Nakata and screenplay by Takahashi Hiroshi.

Interesting fact: this movie’s budget is only $1.2 million but the gross exceeded $130 million, it becomes the highest grossing horror film in Japan.

I love the audio effect in this movie, it really gives me the creep. Not only the movie is my all time favorite movie, Sadako also becomes my all time favorite ghost. I even put her entrance in my mobile phone. When I first watched the movie, I was literally jumped out of my chair when my telephone rang right after the movie was over. And my student left her TV set turn on while she was about to sleep for about a week because she was afraid that it would suddenly turn on just like in the movie.

I love everything about this movie. I’ve seen it more than 5 times. It’s a definite 5 stars movie for me.

But, I hate the remake. How I feel about its remake can be read here.