I’ve been thinking about what I should write for this special post…Then an idea came to me…the idea actually came from someone who stole my content without permission. The post is so simple (and I still don’t understand why someone want to copy-paste it), it’s about Hyde and how I feel about him. At that time, somewhere in 2006, I wrote it in Bahasa (Indonesian language)…For my 666th post I will translate what I have written back then into English 🙂 . The original post can be found in here.

After this post, I will translate the rest of the member each month as part of my tribute to them. 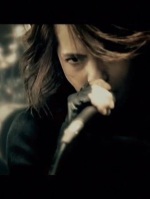 Hyde is the charismatic vocalist of L’Arc~en~Ciel. Some said that his real name is Hideto Takarai. He was born in January 29, 1969…which means that he is now 42 years old, BUT his appearance is still like a man in his late 20s. He is not tall (a polite way of saying he is short), some said he is only 160cm (I also read somewhere that he probably around 158cm)…hehehe really short!! Fortunately when it comes to him, size does not matter!!! His amazing voice, his charisma and his pretty and handsome face make people ignore his height. He likes to act mysterious, but in fact he is a fun guy…we can see it when he and Ken perform in TV Shows.

Hyde used to study design despite the fact that he suffers partial color blind. It is said that he can not tell the different of soft color. He used to be in a band called Jerusalem Road. Tetsu spotted him and determined to ask him to sing in his band (Tetsu was planning to sing in his band till he heard Hyde’s voice). Although Hyde always thinks that being a guitarist is cooler than vocalist, but let’s face it, he is a much better vocalist than guitarist.

In the beginning of Laruku’s carrier, Hyde looked SO FEMININE …He was so pretty like a real girl. Look at the picture on the left…Damn! He is prettier than I have ever been in my entire life, and he is a man while I am a woman. There are a lot of Bishounen (pretty boy) in Japan, however only Hyde can look pretty without excessive make up such as Manna. Even now, when he is already dressing like a man, he is still looking so pretty. As I already wrote here, he’s just too damn beautiful.

Although Hyde is the eye candy of the band, his look is not the reason for his fame. Hyde is so poetical, he write amazing and beautiful lyrics. He wrote the lyric in almost all the songs in L’Arc~en~Ciel…In AWAKE, he forced everyone to start writing too, hehe maybe he was running out of idea 😉 . Hyde has a beautiful voice that can touch my heart so deep, his falsetto is perfect…I love hearing his voice. His voice was the reason why I fell in love with Laruku for the 1st time (it was Finale), however soon after I heard all their songs, my favorite member changes in to Yukihiro 🙂 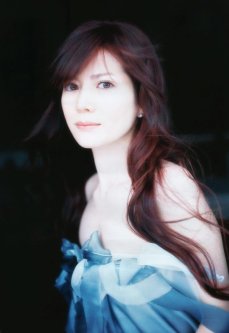 In late 90s, Hyde always said that the most beautiful woman in the world is a Japanese Model by the name of Megumi Oishi. He kept on saying that in every show if one of the questions was about dream woman. Hyde never met Megumi. A TV show called RABU RABU ATTACK set them up, it was such a cute meeting (here). After that meeting, they started dating and they got married in December 25, 2000. Megumi is taller than Hyde, she is about 170cm. Hyde wrote a song called Anemone for Megumi. In November 11, 2003, they had their first child. When I heard Hitomi no Juunin, I have a strong feeling that the song is for his child. I hope this couple will stay together forever 🙂

During Laruku’s first long break, Hyde played in 2 movies, Moonchild and Kagen no Tsuki. In Moonchild, he played with Gackt, Gackt has a better acting than Hyde…but my eyes were focusing only on Hyde. He became a vampire named Kei.  In Kagen no Tsuki, he became a ghost…hehe see the connection of his movie there? Hyde had more role in Moonchild, however he looked damn gorgeous in Kagen no Tsuki.

On the first break, Hyde made 2 solo albums, Roentgen and 666. Roentgen is full of slow songs while 666 is a hard rock album. He forced his voice too much in 666. On the second break, he released another solo album called Faith. Listening to Faith made me lost interest of another side project or solo album by Hyde. And that’s why I don’t feel interested with Vamps. Vamps is Hyde’s side project with Kaz…I don’t even know what’s the title of their first album.

This Update is added too all post about Laruku’s members (Hyde, Yuki, Ken, Tetsuya) (^_^)v

I have posted my thought on Real. Before I post my thought on Smile, there will be a bridge post that connects both albums. Just like when I wrote about Laruku no Singuru (Laruku’s singles), I will fill the gap between Real and Smile with a post on their solo projects during their break.

22 thoughts on “The Most Handsome One : Hyde”