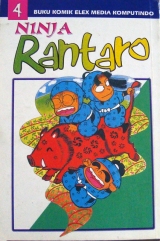 I knew Ninja Rantaro from its anime. The moment I saw the anime, I became addicted to it because it was (still is) a very hilarious anime. I, then, knew about the existence of its Manga…but I was too late, the Manga is already hard to find. I managed to get hold of 1 volume, volume 4. I have been re-reading it almost every year and it never stopped laughing.

I just realized that I haven’t write anything about this hilarious Manga, so I decided to re-read it (again!!) and write about it 🙂

The story takes place in a school for ninja (in old Japan, not modern Japan).  The center of the story is on 3 1st grader named Rantaro, Kirimaru and Shinbe. Apparently, the whole 1st grade is considered as trouble maker…BUT they are very loyal.

Rantaro comes from a family of ordinary Ninja, their parents wanted him to be a better Ninja, hence they send him to that school. Shinbe is a fat boy who comes from a wealthy family, because he comes from a rich family, he tends to be a bit slow and lazy. Kirimaru is an orphan. His house and family were burned down during the war, but he manages to say alive by doing a lot of side job. He is very stingy and weak of the word ‘for free’. 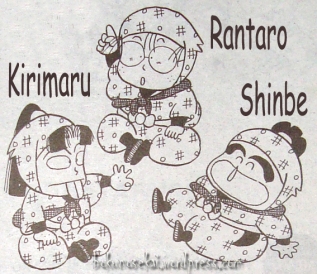 These 3 boys are very close and always do things together. Things that are good, in term of their will to help other people around them, and bad things that followed because of their carelessness. All their doings are very funny.

Their 3 main teachers are also as hilarious as them. Doi-sensei, 1st grade home room teacher. He is still young and really good to his students, but he often have stomachache caused by stress, the stress it self is caused by his unusual students. Yamada-Sensei, he is a field teacher, which means he taught them to practice their ninja skill. In spite of his look, Yamada-sensei is a nice teacher. He really like to undercover as a female. Tobe-Sensei is the teacher for sword skill. His sword ability is number 1, but he can not even fight when he hasn’t had lunch yet.

Beside those teachers; there is also the headmaster, a very old man, Cafeteria owner who will never forgive anyone who doesn’t eat all their food (she even scolded the headmaster if he doesn’t eat all the food), and Shina Yamamoto, a female teacher from kunoichi class (class for girls). You will also see the other 1st grader in Rantaro’s class, they are: Torakawa, Danzo, Sanjiro, Isuke, Shozaemon, Heiday, and Kisanta.

This book used a lot of, what Indonesian called as, Plesetan. It is a words play, words with similar sound but have different meaning, or they add new word to make it has different meaning. For example (from page 26);

This Manga also has so many slapstick joke but they aren’t overdoing it. In some panels, they sometimes talked to their reader. Sometimes, there are some characters who appeared by rolling down the pages. And sometimes, what they do can affect the panel like this one>>here

Beside the jokes, this Manga also tell us so much information about Ninja and their moves. And we can also learn a bit Japanese because it often includes the native language due to that ‘plesetan’ thing.

Overall…this Manga is a good recipe for a good laugh.

In volume 4, there are 4 strories

I wish I can collect all volumes of this Manga, because I enjoy it a lot.

These pages are my favorite part