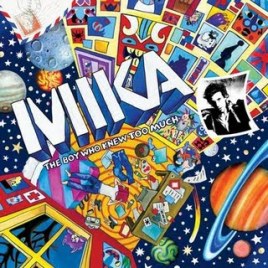 Mika had just released his second album a few months ago…I’ve been waiting for his album ever since I fell in love with Life In a Cartoon Motion. I’ve been listening to his second album for a couple of weeks and now I’m ready to write it down.

Basically…it sounds alike like Life In Cartoon Motion, Mika hasn’t done a lot of changes in his music style. For now, I still enjoy his album…but if he doesn’t do some changes in his album (of course not a drastic change), one day I might get bored of his works…but for now, I enjoy it a lot 🙂

The first song of this album is We Are Golden, it is a very cheerful and energetic song. There are some parts where Mika change her voice like what he did in Grace Kelly. I like the part where there is voice of people sing to emphasize the lyric. Although this song is very cheerful, I sometimes find this song a bit bored. The second song is one of my favorite songs, Blame It on the Girls. I really like the beat and the percussion in this song. I never get tired of listening to this song. The third song is the 1st song I’ve heard from this album, Rain. This is also one of my favorite songs :). This song is full with Mika’s high pitch voice. It might sounds a bit bored to people who don’t enjoy Mika’s music because he keeps on repeating the same sentences over and over again “When it rains, it rains”…but I think that’s the unique part of this song.

Dr. John starts a bit slower compare to the other first 3 songs…but the beat became faster in the refrain Piano plays a big part on this song, I can imagine Mika singing this song and playing piano at the same time. The fifth song, I See You, is kinda like Over My shoulder…a very slow song but not as slow as OMS. I always enjoy this part of Mika…this deep side of Mika. Next song is also one of my favorite songs…I just can’t get Blue Eyes out of my mind. The beat short of stuck in my brain and I can’t stop myself from humming it. Just like Blame it on the Girls, Blue eyes also has interesting percussion. The song is closed with the sound of piano and acoustic guitar.

The 7th song is another cheerful song. Good Gone Girl kinda reminds me of an old song but I can’t keep my head together to remember what song it was. The song can make my body move, it’s a really fun song. Touches You is started with Mika’s high voice…the beat reminds me of George Michael’s song…Don’t ask me which one, because I don’t remember which one is it….I still doubt if it’s George Michael or not

. By The Time is another slow song. I like I See you more than this one. This song is a bit boring.

For me, One Foot Boy has a hip-hop beat but of course the song itself is not a hip-hop song (Thanks God for that). The eleventh song is also my favorite song, Toy Boy is really really interesting. I often play it over and over again. The song sounds dramatic and old fashion…I fell in love with this song instantly, without any effort or whatsoever. The album is closed with Pick Up The Floor, another slow song. I think this song fits perfectly as a closing song, because the string makes it sound elegant…and elegance is a good way to close an album.

I’ll be waiting for your third album!!! 🙂 And please come to Indonesia one day.