Zoro’s dream is to become the greatest swordsman in the world, but at this moment that title is held by one of 7 Shichibukai named Juraquille ‘Hawkeye’ Mihawk. To achieve his dream, Zoro set out to the sea to find and challenge that man. Even when Luffy asked him to join his crew, Zoro told Luffy not to hold him back on his dream. 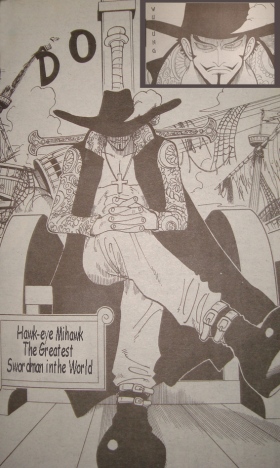 Zoro’s first encounter with Mihawk happened during The Battle of Baratie. When Zoro was going to leave Baratie in order to catch Nami, Mihawk appeared out of nowhere and cut Krieg’s Galleon ship into pieces. Zoro saw his opportunity, so he challenged Mihawk to prove who the strongest one is.

Zoro “So…you are the strongest!”

Mihawk “What do you want?”

Zoro “I come to the sea to find you. Let’s fight and find out who’s the strongest one! This is for my ambition and my promise to my best friend”

Mihawk totally underestimated Zoro, he only used a small knife to fight Zoro. No matter how hard Zoro tried to fight, he just couldn’t beat Mihawk’ small knife. When Mihawk thrust his knife, Zoro didn’t step back and accepted the stab near his heart. 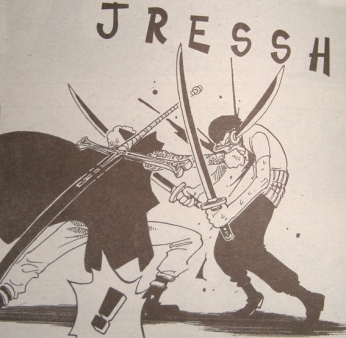 Mihawk “Why didn’t you step back?”

Zoro “I don’t know. If I took even a single step back, that means I had denied the pledge I hold till this day! And I can’t go back”

Mihawk “even though that means losing?”

Zoro “I’d rather die than taking a step back!”

Mihawk “I’ll remember your name and to honor you I’ll use my sword to defeat you!’

Mihawk then unsheathed his black sword and within seconds he defeated Zoro and destroyed 2 swords that were used by Zoro. When Mihawk was going to cut Zoro, Zoro turn to face him. For him, a wound in the back is a shame for a swordsman. Mihawk was touched by Zoro’s determination, he even encouraged zoro.

“It’s too young for you to die, know yourself, know the world, BE THE STRONGEST, RORONOA!!! As the strongest, no matter how long will it takes I will wait for you!!! Be a man with strong will and courage to face my sword!! TRY TO SURPASS ME, RORONA!!!” 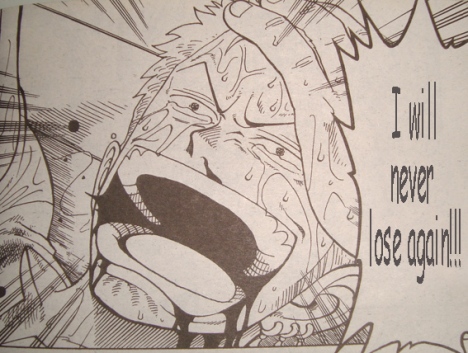 Zoro lift his sword (the only sword he had left) and then said “Luffy can you hear me? I’ve made you worry and if I can’t become the strongest swordsman…it’ll cause you trouble..!! And therefore I WILL NEVER LOSE AGAIN!! Till the day I can defeat him I will never lose again!! Hey…Pirate King, do you have something against that??”

This fight only took up 2-3 chapters but it was an awesome fight…a fight for a dream. This is one of my many favorite moments…it touches me so deeply. Zoro soon proved to be the most reliable comrade.

This is my dedication for The Best Manga Ever Existed, One Piece by Eiichiro Oda