There were 2 musical movies released in these past few years. The first was Across The Universe which was based upon The Beatles’ songs and the second was Mamamia which was based on ABBA’s songs. Both movies used song title for the movie title. And both of them made the stars sang those two legends’ songs.

First, let’s check on the bands!! Just a brief review. The Beatles was and still one of the best rock bands ever created on this planet. Their songs are timeless, people from many generations still adore their music…including me. These four boys grew up to be four men and we can feel changes on their songs as they grew up. The Beatles is a phenomenal in the past, present and future. ABBA was the greatest pop-dance band ever existed. ABBA was also consisting of four people, 2 women and 2 men, they were bound in marital status. They created a lot of easy listening, move your body kind of songs. Their songs are also timeless, an I love some of their songs too.

I admit that I love The Beatles so much and I only like some of ABBA’s songs, but it did not clouded my judgment over the movies. 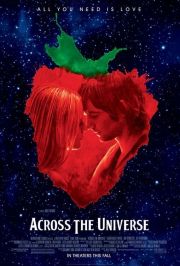 Across The Universe central character was played by Jim Sturgess, a handsome British actor. Sturgess played as Jude, a British man who traveled to USA in order to see his father. He found something else in USA, friendship and love. Lucy, his best friend’s sister, captured his heart. Their friendship and love came to a test when Vietnam’s war came between them. The story also involved people around them like female singer who rented her rooms to them, a Chinese girl and a Blackman. Deportation made their love even more difficult. The director re-made all the songs, they didn’t simply take it from the album and record it with new voice, and they created new sound. It was interesting to hear Beatles’ songs in a new perspective.

Mamamia’s central character was played by Meryl Streep, a very talented American actress. She played as Donna, a mother of 1 daughter, Sophie. Sophie was getting married and she wanted her fathers to come to her wedding. There were 3 men who had ever slept with Donna and she didn’t know which one is Sophie’s father. The story entangled in these 5 characters, the return of old love and the pride of being a father. The songs had not undergo major changes, I’m not an expert on music but I can tell that the music sound almost the same with the original.

From the story point of view, ATU has deeper story than Mamamia. ATU is more complicated than Mamamia. The love struggle throughout many ups and downs and across continents is more interesting than what we in Indonesia used to call CLBK (the return of an old love). But ATU requires serious attention while Mamamia is simply ‘sit back and watch’ (easier to digest) and sing along if you want to.

From the music point of view, ATU is more creative than Mamamia. Even though I prefer the old Beatles way, but I got to give them 2 thumbs up for the major changes they did on the songs, it was great. As I said before, Mamamia doesn’t offer us new perspective on ABBA’s songs.

So, even though I like both of them, I choose Across the Universe over Mamamia anytime. The artistic value in Across The Universe is way better than Mamamia.

Then again, it always come to people’s taste … other people might said the opposite side.